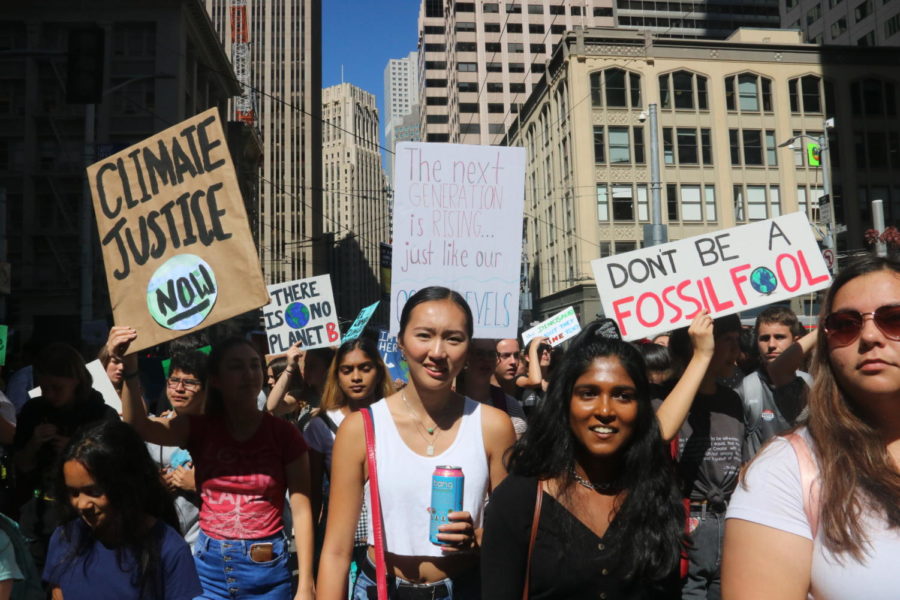 Teenagers wield signs demanding climate justice as they march through the streets of San Francisco on Sept. 20, 2019.

Thousands of people, from toddlers to senior citizens, kicked off the youth-led climate strike in front of Nancy Pelosi’s office on September 20, with signs at the ready and chants in full swing.

The protest hit specific targets like California Senator Dianne Feinstein and Speaker of the House Nancy Pelosi to gain their support of the Green New Deal.

“Our elected officials aren’t doing enough to phase out fossil fuels and push for renewable energies. We need to be out there to show them that it’s what we want,” said Chris Lauth, a protester in San Francisco.

Demonstrators protested against other institutions, such as the U.S. Immigration and Customs Enforcement (ICE), due to their inhumane treatment of migrants, many of whom are fleeing weather-induced disasters.

In addition, the protesters targeted BlackRock, an investment company, and PG&E, a California-based natural gas company, to hold them accountable for the injustices they’ve committed against the environment. BlackRock funds companies that are burning the Amazon rainforest while PG&E has not been held responsible for causing fires due to neglect, and, actively fighting against renewable energy.

Outside BlackRock headquarters, the youth chanted, “BlackRock, BlackRock, how much do you earn for murdering our children as the Amazon burns?”

Gabby Wei, a senior in high school, said, “It’s crucial for us to stand up for what we believe in and face the fact that our Earth is dying and they are the ones killing it.”

But the youth haven’t just been protesting in the environmentally-conscious Bay Area. According to the New York Times, up to 250,000 protesters flooded Manhattan. Vox estimates Sept. 20 to be “the largest climate protest in world history,” with “over 2,500 events scheduled in over 163 countries on all seven continents.”

Almost 1.5 million people protested in Germany alone. Even as far as Antarctica, a group of scientists went on strike.

It’s no surprise people have turned out in such large numbers: we are facing a problem that endangers every one of the 7.5 billion humans on this planet.

“It doesn’t matter who you are; you’re going to get screwed by climate change because this is the only planet we have. You can’t escape it,” said Michelle Zhang, a freshman at Minerva College.

The strike was held in anticipation of the United Nations Youth Climate Summit on Sept. 21. Young activists gathered at the United Nations Headquarters in New York to discuss the dire climate situation and propose solutions to the crisis. Teenagers from around the world attended to demand action from world governments.

“Yesterday, millions of people across the globe marched and demanded real climate action, especially young people,” said 16-year-old climate activist Greta Thunberg, “we showed that we are united and that we, young people, are unstoppable.”

The strike was inspired in part by Thunberg. At age 15, she began skipping school every Friday to protest in front of the Swedish Parliament.

Her social media posts about the strikes went viral, catapulting her into the global spotlight. Today, her organization Fridays For Future is one of the youth-led activist groups involved in the worldwide climate strike.

Other activists agreed with Thunberg with the importance of coming together as a global community. “For those of us in Africa, adaptation and resilience have become our focus,” said Wanjuhi Njoroge, a young climate activist from Africa. “We are the lowest emitters, but suffer the most. But this is not a time to shift blame. This is a time to work together.”

“About six years ago, I learned about coal-fired power plants and the communities that are impacted by them. I had the privilege of not having to grow up next to them, but a lot of people in this country and all around the world do, and it creates health problems. I think there’s a better way we can get our energy,” Lauth said.

The youth activists made demands for a safe and stable future, urging world leaders and polluting companies to make changes.

“I’m marching because I don’t want my future to be ruined by the inaction of the government,” said Emma Berryessa-Lathe, a 17-year-old protester in San Francisco. “This is our planet. And I want to be able to know that my descendants are going to be able to live in a place where they are happy and safe.”

While the summit also featured celebrity speakers, including Olympic snowboarder Chloe Kim, regular adults took to the streets in unity with the youth-driven movement.

“I’m marching to support all the kids whose futures could be real bleak. I’m hoping that today will make an impression on decision-makers to start the work to reverse climate change,” said Richard Ivanhoe, a senior citizen at the San Francisco climate strike.

All around the world, parents kept their children in mind while striking. They brought their young kids, and grandparents brought their grandchildren to fight for their future.

“They’re all so young. It moves me to tears to see this as an old hippie,” Terry Windhorst, a parent visiting from Boston, said. “My daughter goes to school in New Hampshire. Her entire school started at 11:30 so that they could all get up at 6 a.m. to go to the local town and line the whole commuter route. So, as everybody drove to work, these kids were lining the road with signs like these.”

Some private schools in the Bay Area planned the school day around the strike so that students could participate.

“We watched a video about Greta and her talking about climate change. We came to march because climate change is ruining our world. We need to stop it,” said Makenna Irving, a sixth-grader who attended the San Francisco strike with her school.

Many other young activists were also inspired by Thunberg to get involved. At the summit, there was a pitch competition in which youth innovators suggested climate-conscious inventions to a board of judges.

There was also an “Intergenerational Town Hall,” in which young climate activists asked “direct, unfiltered questions” to world leaders.

Each guest received a Green Ticket, which provided free, clean-energy travel to the summit at the UN headquarters.

Even though the strike was carried out globally, involving millions of people and reaching to the United Nations, it was organized on a very local scale.

“Different members of our team were involved with the strike differently,” said Emna Sellami, co-president of Carlmont’s Green Team. “Some actively organized San Francisco’s event, some recruited other Carlmont kids to attend, and some just showed up. All of these contributions were extremely valuable to the cause.”

The Green Team, along with many other Carlmont students, marched in San Francisco and across the Bay Area to make their voices heard. On Sept. 20, Snapchat stories were full of videos of students chanting and brandishing signs in the streets of the City.

The global climate strike forced the public and government officials to face the consequences of climate change. However, the fight is far from over.

Michelle Wheson, a protester in San Francisco, said, “Now our government knows that we care about what they’re doing. We care about this planet being a habitable place for current and future generations.”

Through activism, the youth around the world made it clear that they are all going to fight tooth and nail to protect their futures.

Wheson said, “If you really care about something, I feel like getting out there and saying that and putting it into the world is the only way to fight for change. If we’re not active, and we’re not showing up, then how can we expect anything to be different?”