Celebration Assembly ends the year on a high note 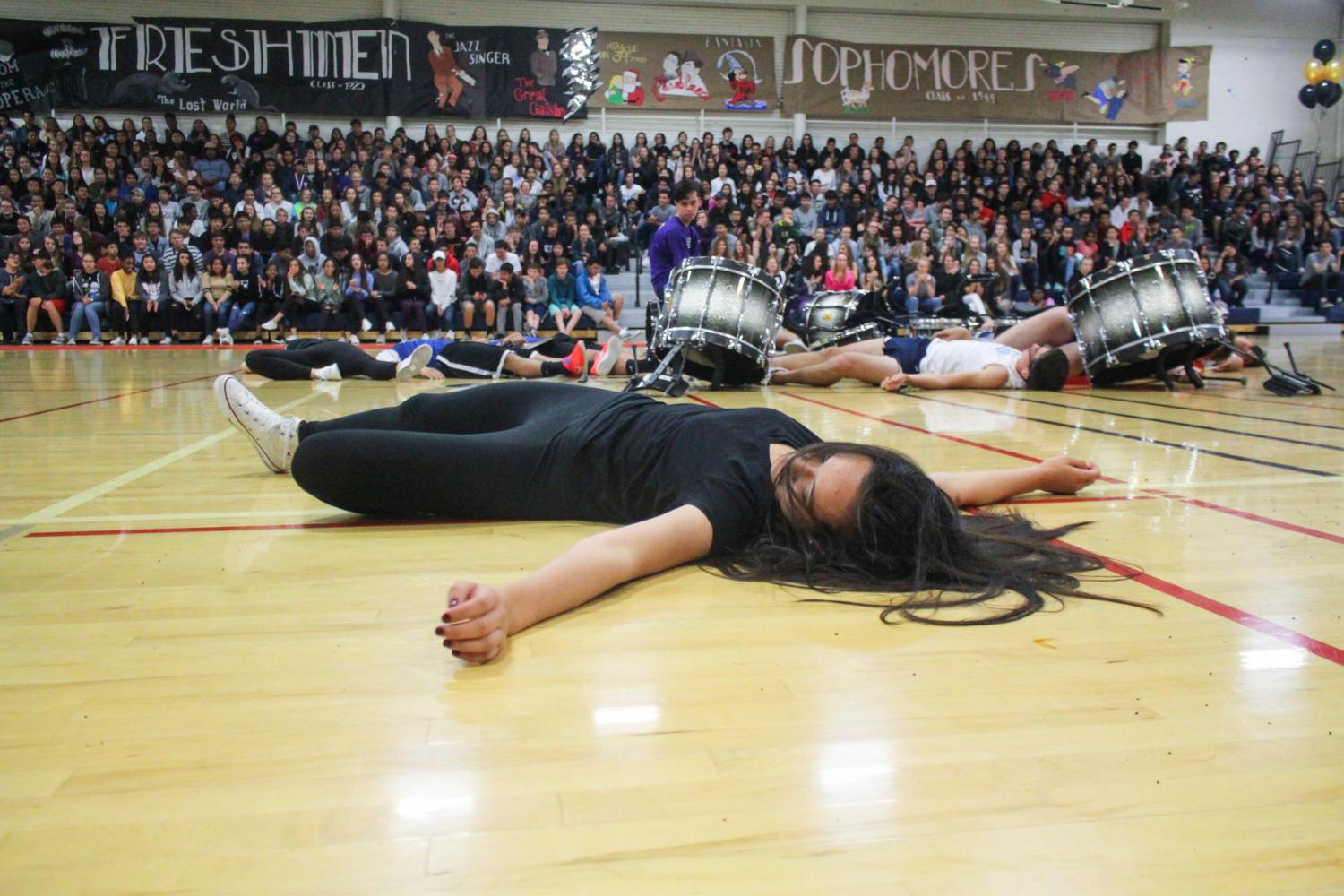 Held on May 25, this year’s Celebration Assembly was based on the theme Red Carpet Awards. Decorated with films from various time periods, a red carpet at the entrance, and festive balloon structures, the Terry Stogner Gym was turned into an eye-catching sight.

“I think the assembly went really smoothly. It’s the shortest assembly of all of them in the year, so it tends to be less hectic. All of our acts went really well, and the audience seemed to enjoy it,” said sophomore Olive Peschel, a member of the assemblies commission.

This year, the Celebration Assembly included multiple new aspects that added to the excitement. For example, several students from the Special Education department joined Carlmont Plant Manager Jerome Harris in singing the National Anthem to kick off the assembly.

“We actually didn’t even need to reach out to Jerome. He approached us about having the kids sing with him, and we definitely think we will be doing it in future assemblies since people were so supportive,” said Peschel.

The Celebration Assembly also introduced a new raffle activity, in which students could win a prize if their ticket number was called. Tickets were distributed in the days before the assembly from May 22 to May 24.

“I like how they included the raffle because it shakes stuff up and invited kids to participate during the event. It was a fun experience that I won, and the prize was pretty neat,” said freshman Tim Kraemer.

One of the fan favorites of the Celebration Assembly was Erin Wise, a senior who won Carlmont’s Got Talent, who performed the song “Red Bone” by Childish Gambino.

“Performing was really nerve-wracking because I’ve never done anything like that before, but after all the nerves went away it was really fun, and I had so much fun in the process too,” said Wise. “I think the assembly was really good because it was fun to see a bunch of seniors participating since it was our last year here.”

There were many other acts that made for an exciting assembly, from the robotics team to Jazz Band to last year’s Carlmont’s Got Talent winner, Monty’s Pitches.

“My favorite part of the assembly was when drumline, advanced dance seniors, and seniors Jason Kuhn and Matt Bowker all performed together. The music and singing, plus the choreography by Stephanie Ramos, were amazing,” said Wise.

The assembly was very senior-oriented as there were many acts that featured seniors to commemorate their last weeks at Carlmont. One of the last acts was a senior rap performed by Dominic Guerro, Chris St. Catherine, Sophie Clark, and Derek Tzeng, also known as DTBased.

Sophomore Suzanne Nie said, “The rap by the seniors was entertaining, and I enjoyed how there was also a video that played along to the rap. The rappers hyped up the assembly since they were pretty good, and it created a positive energy.”

Talcott said, “The teacher of the year award was really exciting, and I’m very honored and humbled to have won that. What makes this one really special is that it’s voted on by the students and that’s really why you become a teacher: to work with the students. It was a very meaningful gesture on their part to acknowledge the hard work that’s gone into what I’ve done here. But I also think that there are so many other teachers here that are deserving of the award.”

The assembly was overall a success and a thrilling event for many students, with a variety of performances that made the audience roar with cheers and smiles.

“I think the assembly will hold a lasting impression for the seniors and everyone else. It’s pretty special for them since it’s one of their last memories at Carlmont. As for me, I hope to continue enjoying the assemblies for the next two year. It’s a true representation of how spirited, talented, and inclusive Carlmont is,” said Nie.