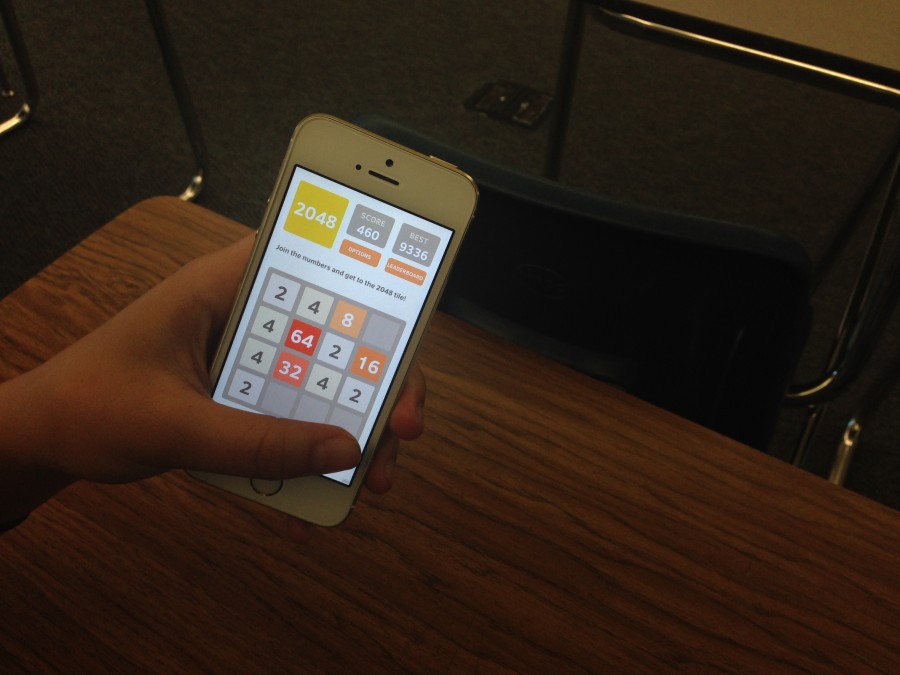 Enticing and simple, the app 2048 has shot to the number one spot in the free apps chart within the two months of being available in the Apple App store.

Created by Ketchapp, 2048 is a relatively simple game where the user swipes tiles on a 16 square grid until they reach the 2048th tile.

Every game starts with two tiles, and after every swipe, either moving  up, down, left, or right, a new tile is added. The user can combine tiles of the same number, and it exponentially increases from two, four, eight, 16, 32, 64, and so on.

“It’s compelling. It’s satisfying when you combine the squares. And its really addicting when you play with the sound on because it has the most satisfying dinging noise,” said sophomore Lucas Coley.

As the grid becomes filled with the tiles, the game becomes harder as the different options of where to move the tiles lessen. Once the board fills up, the game is over.

“It’s pretty challenging, because the new tiles appear at random locations. It’s really addicting, and you really want to beat it, because every time you get closer and closer. It’s like Flappy Bird, but I think it’s going to fade out,” said sophomore Akshay Mohan.

The app has been relatively successful so far, with a rating of four and a half stars out of five stars in both the Apple store and Google Play. Users are able to access their top five high scores and also compare high scores with their Facebook friends.

“Its perfectly designed to be addictive, and beyond that its competitive so you want to beat your friends and your own high score. you can develop strategies and it makes it more fun,” said Coley.

“It’s a good puzzle game if you want to work your mind,” said sophomore Kamrin Choye.

According to the 2048 app description, it was inspired by the 2048 online version, designed by Gabrielle Cirulli. On the online version, it says that it is based off of the game 1024 by Veewo Studio and is conceptually similar to the app Threes by Asher Vollmer.

“With the type of game it is, it will fade out pretty quickly. It doesn’t have much longevity because once someone beats the game, they’ve basically won. They will soon get bored of the concept and won’t feel the need to play it anymore. I think it will be popular for this month and maybe the next,” said Coley.

The app is available for free on Google Play for Android users, the Apple App store for Apple users, and is also available online.