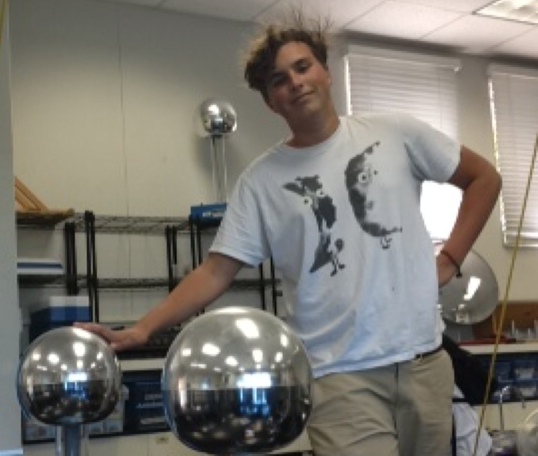 Senior Jules Bruey demonstrates the power of an electrostatic generator.

In addition to dropping the five-point AS Physics class, last year’s combined algebra-based class for the AP tests Physics 1 and 2 has been replaced with AP Physics C: Mechanics.

According to the College Board, “[AP Physics C: Mechanics] corresponds to one semester of an introductory, calculus-based college course.”

AP and regular physics teacher David Talcott explained that the primary reason for replacing AP Physics 1 and 2 with AP Physics C: Mechanics was the College Board’s decision to change the exam for the algebra based AP Physics.

Concerns about AP Physics 1 and 2’s course design, colleges accepting the units, teaching two tests in one year, and meeting the needs of Carlmont students were resolved by the new AP class.

“I did have my concerns about the new algebra based test; I just didn’t think it was a good fit for our school,” said Talcott.

As the last school in the Sequoia Union High School District to update their physics program, Carlmont’s physics students dealt with dilemmas in the past that have been resolved by the change.

Senior Bobby Goldie faced one of these dilemmas when he was unable to take AP Physics 1 and 2 in his junior year because he didn’t meet the concurrent calculus enrollment requirement.

“From what I gathered through students and teachers, the math level was an error in the course requirement for the old AP class. Basically, the class changed but the requirements didn’t. In that way I feel that the math requirement was unnecessary for the AP class I wanted to take junior year,” said Goldie.

The switch to AP Physics C: Mechanics and the elimination of AS Physics have received mostly positive feedback from students.

“I like the change in the class and I really appreciate the efforts the school has taken in updating the AP physics class. Many students are looking to pursue an engineering degree, myself included, and this calculus based class will hopefully prepare us well for future physics classes in college,” said Goldie.

College admissions look at the ratio of AP or honors classes students take compared to the number offered at their high school when considering who will receive acceptance letters. With over 15 AP classes, helping students achieve the best ratio possible is a concern of Carlmont teachers.

“We had two AP classes in physics plus an honors class, so we were really hurting the chances of admittance to schools for students who didn’t take the physics path,” said Talcott.

The elimination of AS Physics means that students who are only looking for an extra grade point will have to look to Carlmont’s 30-something other honors classes to improve their GPA.

“Some people are very concerned about their GPA and are looking for honors classes at every opportunity. Maybe they’re a little over their heads in terms of workload and I think the district wants to discourage that,” said Chan.

The future of the physics program is not yet determined. There is a debate about the directions in which the classes could branch out in future years.

“I was an advocate for AP Physics C: Mechanics, but I could foresee maybe offering the Electricity and Magnetism class sometime in the future,” said Chan.

Although “physics and AS physics classes were very similar,” according to Goldie, there are many supporters, such as Talcott, who are in favor of bringing the honors class back to Carlmont.

Carlmont has a population of strong math students who are concurrently enrolled in calculus when they take physics for the first time. Honors physics was geared towards these students last year, but concerns about GPA inflation and disarray within the program outweighed the need for the class.

“I don’t think the conversation is done as far as where the physics program is going to end up. This is where we are today. I think there is value to having the honors class because some students are so advanced already that it can be frustrating for them to be in a regular class,” said Talcott.

Regardless of the class level, students who are interested in learning physics already have all they need to succeed.

“The decision to sign up for regular, honors, or AP isn’t going to change the student’s ability to be excited about physics,” said Talcott. “I’m excited for this year and these students.”