A dark day for democracy: Insurrection at the Capitol 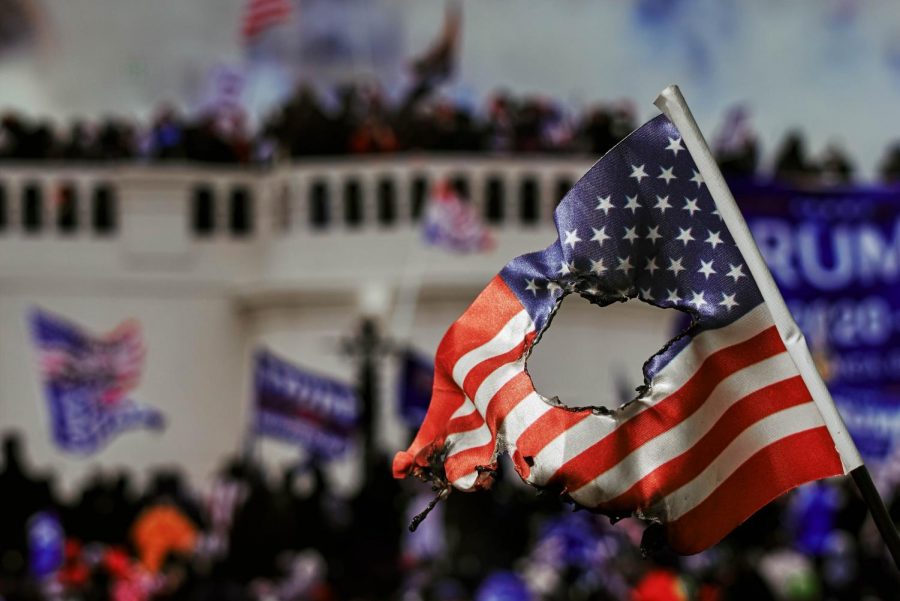 Supporters of President Donald Trump riot and disrupt the process of certifying President-elect Joe Biden as the victor of the 2020 presidential election.

Gathering around a podium embellished with American flags, plexiglass, and banners emblazoned with President Donald Trump’s likeness, a jubilant and raucous crowd eagerly anticipated the arrival of the president to deliver a speech on the National Mall in downtown Washington, D.C. on the morning of Jan. 6.

Blocks away, a hostile crowd was beginning to form around the U.S. Capitol, according to the New York Times. Banners adorned with white supremacy symbols, Trump propaganda, and Confederate insignias accompanied the supporters as they congregated on the Capitol lawn. Among them, avowed white supremacy groups such as the Proud Boys, identifiable by their trademark orange hats, began to antagonize the crowd and set the stage for the chaos that would soon break loose.

Later that day, thousands of Trump supporters surged towards, and ultimately into, the Capitol. By overwhelming the sparse law enforcement and attacking police barricades, Trump supporters and white supremacy groups were able to gain access to the Capitol building and the House and Senate floors. The mob of rioters proceeded to defame American monuments, destroy the property of congressional representatives, and temporarily halt the progress of certifying the presidential election.

“If the liberal Democrats take the Senate and the White House — and they’re not taking this White House — we’re going to fight like hell, I’ll tell you right now,” Trump said. “When you win in a landslide, and they steal it, and it’s rigged, it’s not acceptable.”

In the days leading up to the Jan. 5 Senate runoff election, Trump’s rhetoric, littered with conspiracy theories and misinformation, resembled the tone he struck during his Jan. 6 political rally in Washington, D.C.

On that morning, at Trump’s political rally, promoted as the “Save America March,” throngs of Trump supporters listened to opening statements from some of Trump’s allies. Rudy Giuliani, Trump’s lawyer, prepared the crowd for the president by goading the supporters with provocative comments.

In reference to the disputed election and the ongoing certification of the victor, President-elect Joe Biden, by the U.S. Congress, Giuliani said, “Let’s have trial by combat.”

Trump started his speech with inflammatory rhetoric that served to aggravate his supporters and encourage a confrontation.

“Our country has had enough,” Trump said. “We will not take it anymore, and that’s what this is all about. To use a favorite term that all of you people really came up with, we will stop the steal.”

According to the Washington Post, about 15 minutes into his speech, Trump encouraged rally attendees to walk towards the Capitol building and protest the certification of Biden as the next president.

Trump said, “We’re going to walk down, and I’ll be there with you…We’re probably not going to be cheering so much for some of [the senators] because you’ll never take back our country with weakness. You have to show strength, and you have to be strong.” Trump implored his supporters to “never concede.”

In response to this, Trump thanked his supporters. Throughout his speech, Trump reiterated the purpose behind the rally and seemed to justify the impending violence.

“We’re gathered together in the heart of our nation’s capital for one very, very basic and simple reason: to save our democracy,” Trump said.

In the midst of Trump’s speech, many Trump supporters had already begun the march down Constitution Avenue and Pennsylvania Avenue towards the Capitol. At around noon EST, the Capitol was being protected by temporary barriers, with few officers prepared to defend them.

Around 12:50 p.m. EST, a pipe bomb was reported at the Republican National Committee building. Later, a similar device was discovered at the Democratic National Committee headquarters. As Trump continued to speak, crowds outside of the Capitol became larger and more agitated.

A few minutes after the reports of a bomb, the crowd on the west side of the Capitol began to become violent with the police force guarding the barriers.

With about 20 minutes left in Trump’s speech, demonstrators’ emotions boiled over as they began to harass police officers on the outskirts of the barriers. At 12:53 p.m. EST, rioters breached the temporary barriers on the outer perimeter of the Capitol.

After a few minutes of skirmishes between officers and rioters, members of the Capitol Police arrived, dressed in riot gear and armed with nightsticks and other crowd control equipment.

At that time, congressional representatives gathered inside the Capitol at a joint session of Congress. Seemingly unaware of the violence outside, Speaker Nancy Pelosi commenced the proceedings to certify the Electoral College vote.

Shortly before he opened the session beside Pelosi, Vice President Mike Pence released a letter saying he wouldn’t intervene in Congress’ electoral certification process. “My oath to support and defend the Constitution constrains me from claiming unilateral authority,” Pence said.

Near the White House, as Trump’s speech came to a close, he ended with a call to action.

Trump said, “We’re going to the Capitol. We’re going to try and give them [Republicans] the kind of pride and boldness that they need to take back our country.”

Still unaware of the impending violence outside of the Capitol, the joint session of Congress ended as the congressional representatives went to their respective chambers to debate the validity of the Electoral College results.

Around 1:50 p.m. EST, as Republican Sen. Ted Cruz of Texas argued against the Senate’s certification of election results in Arizona, Chief Steven Sund of the Capitol Police requested reinforcements from the D.C. National Guard.

Outside of the Capitol building, tensions were mounting. Soon after Sund’s call for help, rioters tore through the scaffolding on the Capitol’s west side steps, which was created in preparation for Biden’s inauguration, and the crowd made its way closer to the entrance.

Around 2 p.m. EST, the rioters on the east side of the Capitol, where the police presence was much smaller, began to attack police officers and force their way through the barriers. Massive crowds broke through the remaining barriers after a confrontation between rioters and police officers.

After a few moments of tension between the officers and an already agitated crowd, the mob, armed with guns, pushed through and approached an entrance near the Senate chamber, where lawmakers continued to debate.

Inside the Senate chamber, Democrat Sen. Kyrsten Sinema of Arizona attempted to convince her colleagues of the Arizona presidential election’s validity.

Sinema said, “I urge my colleagues to follow the example of Sen. John McCain and so many others. Reject this meritless challenge, and uphold the will of Arizona voters.”

Rioters on the west side broke into the building around 2:11 p.m. EST.  Two minutes later, as the rioters reached the stairs next to the Senate chamber, the Senate was called into recess, interrupting the speech being made by Republican Sen. James Lankford of Oklahoma.

More than five minutes after the first rioters broke into the Capitol, the House went into recess. Inside the building, violent clashes between police officers and rioters caused mayhem.

Some congressional representatives donned gas masks and were instructed to lie still on the floor until more help arrived, while others were evacuated from the building.

As more rally attendees arrived at the insurrection, the mob became more violent, attacking police officers. Around 3:10 p.m. EST, Ashli Babbitt, a 35-year-old Air Force veteran and avid Trump supporter, was shot by Capitol Police as she attempted to make her way into the Speaker’s lobby. She died at a local hospital later that evening.

At around 4:05 p.m. EST, Biden called on Trump to take action. Biden asked Trump to issue a statement and “demand an end to this siege.”

Trump responded by telling rioters to “go home” while repeating false claims about a stolen election.

Later, at 6 p.m. EST, the interior of the Capitol was secured. Two hours later, Pence reopened the Senate, resuming the certification process. An hour later, around 9 p.m. EST, Pelosi brought the House back into session, vowing that “justice will be done.”

Across the House and Senate floors, emotions ran high as the police forces secured the building. Democrat Rep. Jackie Speier of California’s 14th Congressional District reacted strongly to the inflammatory rhetoric espoused by Trump in his rally earlier that day. In an official statement responding to the events that had transpired, Speier blamed the president himself.

“[Today], the U.S. Capitol was stormed by a mob of Trump rioters emboldened by the President fomenting a coup d’état,” Speier said.

In her statement, Speier acknowledged that Trump himself was not the only one who bore the responsibility for inciting the riots.

“The responsibility for this act of domestic terrorism lays firmly at the feet of the President and House and Senate Republicans who refused to impeach him, stoked his ego, and entertained his conspiracy theories about nonexistent voter fraud,” Speier said.

“Today, the United States Capitol—the world’s greatest symbol of self-government—was ransacked while the leader of the free world cowered behind his keyboard—tweeting against his vice president for fulfilling the duties of his oath to the Constitution,” said Republican Sen. Ben Sasse of Nebraska, in a statement released on Twitter. “Lies have consequences. This violence was the inevitable and ugly outcome of the president’s addiction to constantly stoking division.”

Republican Sen. Richard Burr of North Carolina said Trump “bears responsibility” for the Capitol riots by “promoting the unfounded conspiracy theories that have led to this point.”

“Let me be clear: these actions are not a defense of this country, but an attack on it,” Burr said in a statement. “It is past time to accept the will of American voters and to allow our nation to move forward.”

After both the House and Senate rejected challenges to Biden’s wins in Arizona and Pennsylvania, Pence affirmed the election results, declaring Biden the victor at 3:42 a.m. EST on Jan. 7.

Reflecting on the atrocities committed that day, Democrat Senate Minority Leader Chuck Schumer of New York spoke to the stain on American democracy caused by the upheaval and riots.

Schumer said, “We can now add Jan. 6, 2021, to that concise list of dates in American history that will live forever in infamy […] The final, terrible, indelible legacy of the 45th president of the United States — undoubtedly our worst.”