A day of training for the JV football team 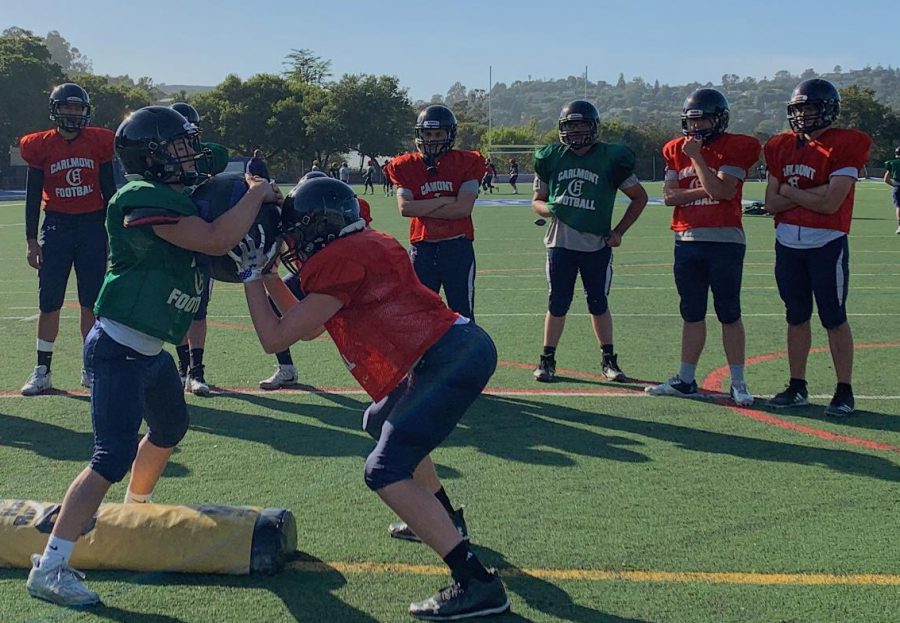 To kick off the JV football team’s practice, they begin their training in the weight room. Typically, the players arrive for practice at 3 p.m. Their days consist of defensive and offensive drills with blocking and tackling, as well as scrimmages. Head coach Dan Nelson strives to improve the team’s overall skills, defense, and on-field attitudes.

After the optional 30-minute lifting session, both varsity and JV players made their way down to the field for warmups. Nelson led the team through a 15-minute warmup to prepare them for the practice duration. The warmup typically consists of some stretching and cardio exercises.

“I think we are doing much better this season, and by specifically practicing blocking drills, we have really improved our defense. I have become more confident in scoring touchdowns and making defensive plays,” said Alexander Sandin, a sophomore on the team.

After warming up, Nelson placed the players into three separate groups to run a circuit of three different everyday drill (EDD) techniques. The groups rotated throughout the circuit, so each player was given a chance to practice each technique.

“I love to see the team succeed and be competitive, but at the end of the day, my goal is to make sure they are having fun and staying engaged in the sport,” Nelson said. “This season, I’ve learned a lot about my players, and I was able to connect with them on a different level, which was amazing.”

Once the team completed the defensive EDD rotations, players tackled the next segment of practice. After finishing the first-team defense, the team split into two groups. One group consisted of skilled position players: the quarterback, running backs, wide receivers.

“Due to the limited time we have left this season, we are trying to be as time-efficient as possible,” said Josh Hunter, the defensive coordinator. “On the defensive side of the ball, we have been focusing on our fundamentals, the basics. As long as the kids understand what they’re doing and what their job is, during the game, we are good.”

To conclude the team’s practice, Nelson orchestrated a few cool-down exercises, including lunges and push-ups. Later, to end the teams’ drills for the day, the athletes run “gassers,” running up and down the field in increments with increasing lengths until the coaches feel they have earned their leave.

Before leaving the team huddled up around Nelson. Nelson explained their strengths and weaknesses and emphasized the importance of position and the strategies they worked on during the duration of practice.