A Decade of Wildfires

How the past California fires have affected the community around them. 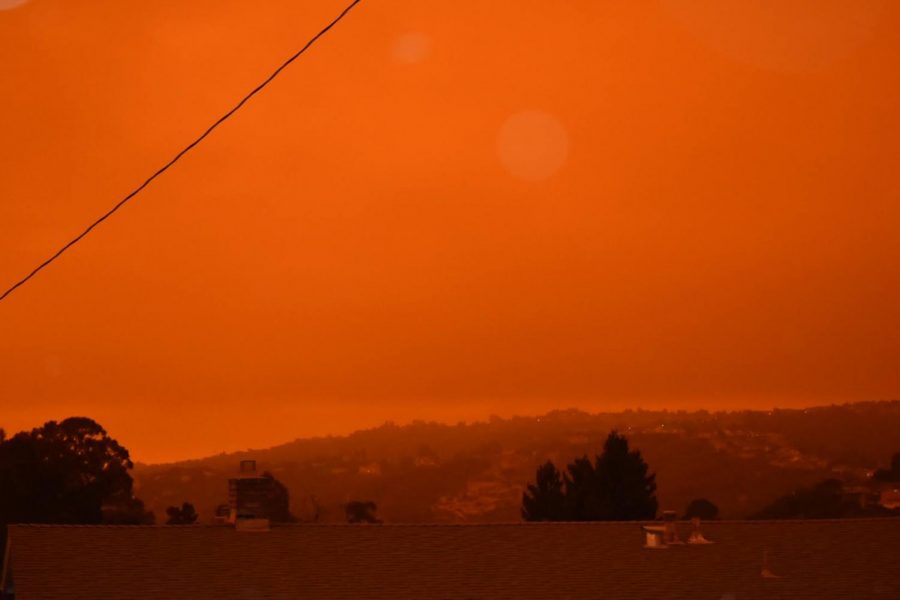 As a result of smoke from an abundance of fires in Northern California, Oregon, and Washington blowing into the Bay Area, the sky appeared a bright orange.

Thick smoke covers the air; ash falls from the sky. Orange flames are flickering through buildings, forests, everything around. An eerie orange glow covers the sky. The day is turned into night, with a film of ash covering every surface. The evacuation had begun.

“We have to go there’s a fire!” a shout was heard throughout the house.

Kendall Grinker, a sophomore at Carlmont High School, was doing homework at the time. She was interrupted by her father, who ran into the house and told Grinker and her mother that they needed to get out and leave. According to Grinker, her father had seen a big fire nearby, through a window of their home.

“I was really scared because I had never been through something like that,” Grinker said.

After the panic had settled, Grinker and her family quickly began to prepare for the evacuation. They grabbed everything they could and everything they thought was necessary. But there was only so much time.

“We took our dogs, we threw everything else into the car and we just drove,” Grinker said.

Grinker and her family evacuated just in time, as their house was in the area that the fire had touched. Thankfully, this fire did not harm any homes.

“There had to be like 20 firetrucks and police cars… I didn’t really know where we were going. And then, we just stopped near Cipriani Elementary school,” Grinker said.

Firetrucks, police cars, helicopters, and news vans all gathered to observe the fires.

The Grinker family waited for the rest of the day outside, hoping to be able to come back home sometime soon. Despite all the panic that was floating in the air at the time, Grinker believed things would go in their favor from now on.

“Maybe an hour or so later, I felt perfectly fine because of the fire trucks and the police cars that were there. I figured, you know, it’s probably under control,” Grinker said.

The authorities had finally contained the fire, and the Grinker family went back home. The family learned much about the evacuation process from this entire experience.

“We went through a fire evacuation drill if something like (the fire) actually happened a lot closer to us and a lot more serious,” Grinker said. “You just have to stay calm.”

For the past couple of years, California has had a massive increase in wildfire activity. As of 2017, there has been a spike in fire danger, with millions of acres being burned every year. According to CalFire statistics, this year, more than an estimated 4 million acres have been burned, a new record-breaking amount for California. And, according to experts, the fires are not slowing down. Some may think that the fires are mainly in areas far away from the bay area, but many fires burn even within our county, and for all too many Californians, their lives were altered.

Some fires near San Mateo County were usually not that active, such as the fire in San Juan Canyon, Belmont, but other fires, even in San Mateo County, often got worse.
?

Daniel Engovatov is a volunteer Deputy Sheriff with the San Mateo County Sheriff Office. He is part of the Search and Rescue Team, and his team has trained to search for people after natural disasters and spread the news of evacuations. He also remembered some fires near Loma Mar, CA, which could have gotten bad quickly.

“Fortunately, most of them had been slow-moving and did not overrun the community, which could have happened,” Engovatov said. “But once again, we got lucky.”

He also mentioned that some residents refused to evacuate or insisted that they would stay to protect their homes. This is where it could get dangerous.

“We were just trying to reach out to people and remind some of the homeowners that were preparing regular garden hoses to try to defend their property, that it will not help, it really gets out of control’,” Engovatov said. “People have been caught in multiple fires here and would not know where to go, especially in the hilly areas we have around here.”

According to Engovatov, the fires would feel different if they were close-by. Engovatov recollected that he had seen areas that he knew, even places in which he had gone biking, in flames.

“When it’s close to home, it’s always impressive to see,” Engovatov said. “We were driving at night and saw an area I knew quite well… just burning… it really changes your perspective.”

Even though wildfires in this area, at least as of now, are less dangerous than in other places, they can sometimes get out of control quickly. Especially if one would travel farther out, it could be intense. Engovatov explained how he was out on patrol with his colleagues who had extended family in the area. At the time, they were concerned about the safety of a community in that area.

“We were quite afraid that it may be gone in a few hours if the wind changes,” Engovatov said. “It puts things in perspective, it was there for a hundred years and it may be gone the next day.”

While the fires here are still somewhat manageable, the total number of wildfires in California has seen a massive jump in the past three years. Since the year 2017 (except 2019, which barely had a fire season), both the number of acres burned and the number of fires has increased dramatically (see chart below). Why? Scientists point to climate change as the answer.

According to scientific papers by the New England Journal of Medicine and Stanford scientists, the recent climate trends and arid conditions have contributed directly to the ongoing rise in wildfire activity. The research showed that they would not stop following this trend unless measures would be taken against it. This means that, unless it is stopped, more wildfires will occur, and more toxic smoke will be pushed into the atmosphere.

However, climate change and dry conditions aren’t the only causes for the recent spike in wildfires.

Ron Johansen is a retired firefighter who worked at Alameda County Fire department, San Francisco Fire department, and as a helicopter flight-medic crew-chief. He had fought in many fires, including the infamous Oakland Berkeley Hills Firestorm. Due to his extensive experience, Johansen knows the wildfires’ cause and their current destructive nature.

Johansen believes that climate change and global warming play a part in the recent significant increase in fires. However, he emphasized that it only plays a role alongside other causes.

One of the causes being the bark beetle. The beetle burrows and consumes the forest’s tree bark, weakening the trees and taking away their best defense against intense fires. Johansen explained that a tree’s bark is resistant to fires since it prevents the tree’s moisture from escaping, making it harder to burn. Without the bark, water escapes more easily, allowing the fire to dry up the tree and eventually burn it. If forests infested with bark beetles are left untreated, then a forest fire in that area could spread faster, cause more damage, and be harder to contain.

In addition to the bark beetle, there have been many recent droughts over the past years that have hit California hard. These shortages further challenge the trees since water is more limited. This causes the trees to dry up and allows the fires to burn the forests more easily. But issues in nature are not the only causes.

“There’s a lot of blame to go around. Lumber companies, politicians, and people,” Johansen said.

He thinks that these companies and politicians are unwilling to spend their money to care for the forests.

“There are millions of dead trees in the forests. They need to be cut down and removed because they are dry and tinder for the fires,” Johansen said.

According to Johansen, cleaning up the forests and clearing all of the dead trees is taxing but needs to be done. The dead trees dry up since they do not preserve their moisture anymore, and they are perfect for feeding fires.

“They’re dead and they’re dry. It’s like putting matchsticks out in the forest,” Johansen said.

Cleaning the forests should be the responsibility of the many lumber companies in California, who have the most contact with Californian forests. He also believes that the government should be paying more attention to the woods, as he thinks that the forest’s health is essential.

From Johansen’s point of view, the amount of devastation caused by the fires was immense. They hurt many forests, animals, and especially homes and people.

“It’s a very sobering sight to see the level of destruction and level of loss that people have to experience in these wildland fires as well as loss to nature,” Johansen said.

He also further explained his experience with the devastating Oakland Berkeley Hills Firestorm. Johansen recounted how he had been an hour away when the fire had started and that, by the time he had arrived to help, 700 homes were already burning.

It had been an incredibly frightening experience for Johansen, who had helped create a blockade of houses to create a firebreak and help stop the onslaught of flames.

“All I remember is the fire was burning so hot, so fast that it sounded like there was a jet engine roaring right next to you, it was so loud,” Johansen said.

He and his team were able to help one woman evacuate. She was panicking; she tried to get all of her pets into her car and kept going into her house to get more things as it was already physically burning. Johansen’s crew had taken the woman into the fire engine as she would not drive away, but it was too late to save her home.

“I remember the captain telling her, ‘Get in your car and leave now or you’re gonna die’. And she just started screaming at us to save her house. We didn’t have any water so we couldn’t do anything,” Johansen said. “We couldn’t save her home. It was just surreal to listen to this and see the panic on her face as she watched her house burn to the ground.”

This woman was one of the thousands who have lost their home in the still-ongoing, catastrophic California wildfires. These fires are getting worse and will not stop getting worse until changes are made. Johansen urged people to help fix these issues by pleading with politicians to remove the millions of dead trees and allow for controlled burns in the offseason. According to Johansen, this would be very beneficial to the health of the forest. He also asked people to make sure that they fireproof their house by removing quickly burnable things such as dry vegetation from their property and utilizing tile roofs instead of tar paper ones.

“There’s a lot of blame to go around and most people will take one side or the other. They won’t take responsibility and say it’s all of us. We’re all responsible,” Johansen said.