A furry friend stirs up excitement at Carlmont 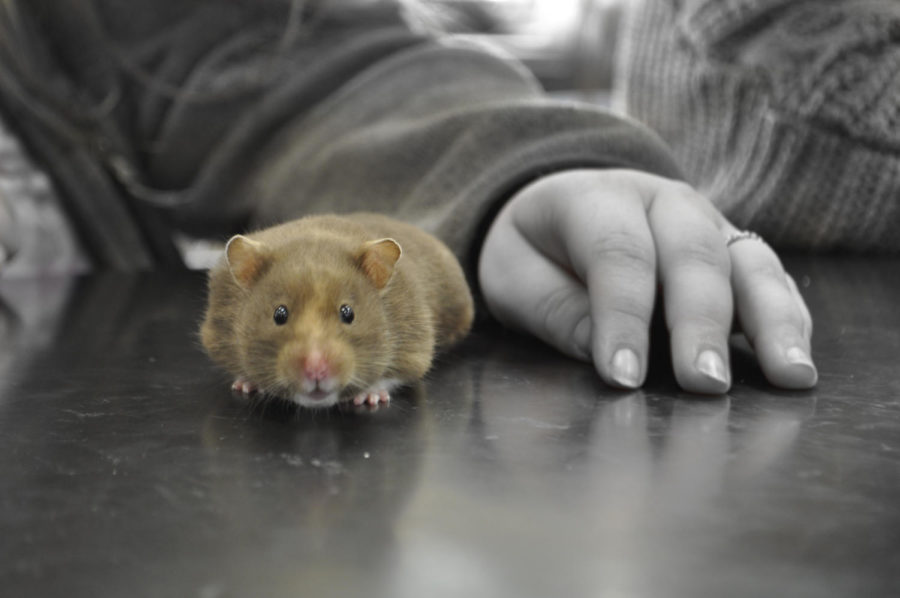 This is David Talcott's hamster, Scout, and many students enjoy playing with her.

One of them lives at Carlmont—specifically, in AP Physics and Robotics teacher David Talcott’s classroom.

Talcott’s hamster, Scout, is a female Syrian hamster. Numerous students enjoy playing with her and having her in the room.

In December of 2017, one of Talcott’s students wanted to get a class pet for his class. So, she got a hamster and brought it in at the beginning of the semester.

“Class pets are fun, and lots of people like them. They can really help students [that] are stressed out as well,” Talcott said. “There’s really no downside to having a class pet.”

Although Talcott doesn’t think that there are any negatives to having a class pet, some may think that maintenance for a class pet is impractical and tedious. However, according to Talcott, it’s not too difficult to take care of the hamster.

“We have to do the obvious things, like [making] sure there’s water in the bottle and food in the cage,” Talcott said. “Basically, it [the hamster] is a very simple pet to take care of.”

While class pets like Talcott’s hamster are easy to take care of, sometimes they can distract students from doing their work.

“With Scout [the hamster] in the room during a work session, lots of the [robotics] team goes over to her cage and plays with her, or [they] just watch her in her cage,” sophomore Rafael Montalvo, a member of the robotics club, said.

Other students who do not have Talcott as their teacher also agree with Montalvo’s point.

“If [the class pet is] a noisy pet… then it can be highly distracting to students during lectures and tests,” sophomore Lexie Rianda said. “Also, if the pet is near the teacher while they’re talking, then the students’ focus will divert to it instead of the teacher.”

Despite the negative sides of having a classroom pet, many teachers still think that the benefits of a class pet outweigh them.

“I like the idea of [having] a pet in a classroom. I believe [that] there are a lot of emotional benefits if… students can connect to an animal,” Joshua Sheridan, a visual arts teacher at Carlmont, said.

Students and teachers from all over the world have the same idea as Sheridan.

Even with the distractions, classroom pets are still advocated by many because of the many benefits gained from it.

Montalvo said, “[A classroom pet] increases the energy and happiness of everyone.”