A new break for physics 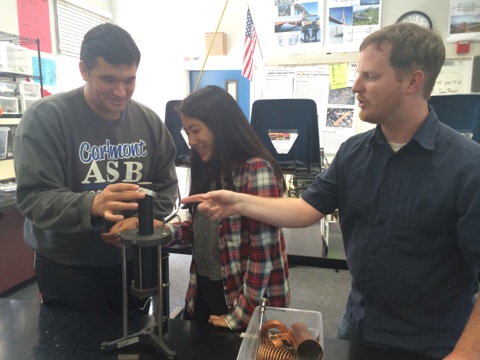 Students regularly pick a science path early on due to the time investment of two years per AP science. Students would have to pick between AP Chem or AP Physics, unless they double enroll.

For the 2014-2015 school year, Carlmont Physics has removed the AS class, giving students the option to take either regular or AP as first-year students.

This new structure is expected to enhance student ability and convenience.

Physics teacher David Talcott said, “We made the switch at the AP level to be more consistent with the rest of the schools in the district. There was some concerns about how well AP Physics 1,2 served students who hoped to use the credits in college. For the AS Physics change, we had concerns that there were 2 regular physics classes and 7 honors classes.”

With the current physics path, students can choose to take either regular or AS Physics and move to AP Physics where they take both AP Physics 1 and 2 test the same year.

Currently, students with stellar performance in regular physics and those with a B or higher in AS are encouraged to continue to AP Physics.

AP Physic students will take the AP 1 and 2 physics test after two years in the Carlmont Physics program.

Senior Natalie Tussy, currently enrolled in AP Physics said, “The current physics layout is not convenient for almost all seniors. Although you get to participate in an AP science, students take two AP courses for physics in one year as opposed to Physics 1 during AS Physics and Physics 2 during AP Physics.”

Although it is suggested that students take regular Physics before AP C to develop basic physics skills, some have the opportunity to jump straight to AP Mechanics C if they meet the AB Calculus corequisite.

Compared to AP 1 and 2, AP C is more math focused.

College Board’s website describes AP C as follows: “The AP Physics C: Mechanics Exam covers approximately the first half of a one-year course in introductory physics with calculus, intended for students planning to major in engineering or a physical science.”

Although the math requirement can make physics a one year class, many students lost the freedom of when to take a five-point physics class.

With the elimination of AS Physics, students who want to take an honors physics course will either have to be advanced in math or plan to take two years.

With the option to jump immediately into an AP science class has perks and downfalls.

Junior Sydney Cho said, “Many students still have not found their interests in high school and are not familiar with physics. The creation of a possible one year physics program is very harmful. With a two year Chemistry program, students have a year to figure out if they like the course before diving head first into a college course.”

The new physics course will allow students to have a taste of many aspects of physics in a year-long course.

Sophomore Nicole Lyon said, “I like the new physics branch because it can be short and sweet, letting you have a taste of a wide variety of sciences before heading off to college. It is very convenient and the math requirement helps group kids at the right level per class so no student throws off the class or possible curve.”

The elimination of honors physics and reorganization of the physics track has left some current honor students frenzied in picking next year’s courses.

Talcott said, “Current AS Physics students have an assortment of choices to make.  For physics, they can take AP Physics C Mechanics, engineering, or a slew of other courses that are awesome in the Biology and Chemistry Department.”