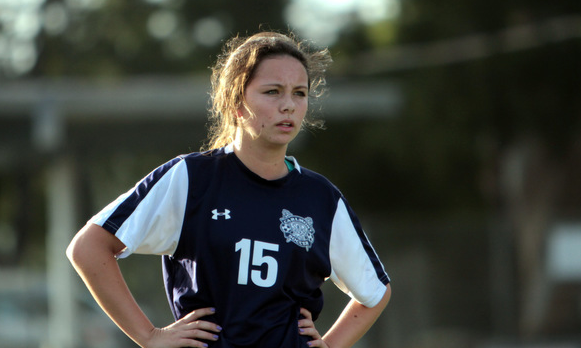 Reed inflamed a tendon near the outside of her ankle in October when she was slide tackled from behind. She managed to keep playing through the pain for a while, but it only got worse.

Reed said, “I also got two bones jammed in my ankle but my chiropractor was able to adjust them.”

In order to get healthy again Reed went to physical therapy for a month and worked on strengthening her ankle for the Carlmont season.

“I took the month of December off and focused on making my ankle stronger,” said Reed.

The first week of January, Reed tested her ankle against Hillsdale. Carlmont came out victorious with a 2-1 lead.

Carlmont Varsity coach Tina Smith said, “She’s a solid defender. When I put her on the outside I know she won’t get beat.”

In order to prevent anymore pain, Reed has to get her ankle taped before every game and practice.

“It aches when I run for a long time and when I cut the ball, but I play through the pain. Plus icing after makes it all better,” said Reed.

When it comes to playing through the pain of an injury, student athletes do what it takes to stay on the field.

“Its important to work towards things that are important to you. I wanted to finish my senior year playing with my teammates so I worked hard to heal. You need motivation to get better from your injury, and mine was my team,” said Reed.

The Scots have faced many injuries only half way through the season, but are still only a few points away from first place.

“At one point we only had two defenders. Having Devon back has helped the team a lot. She is an expert at defending and knows what she’s doing,” said Smith.