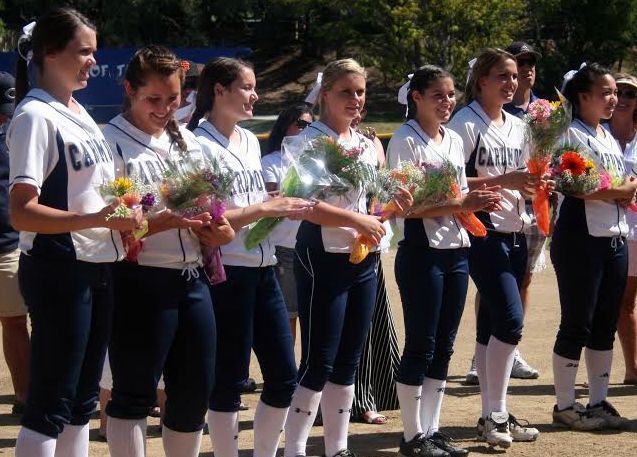 A crowd of family members, friends, and teammates watched proudly as the senior players from both Carlmont and Burlingame High School were presented with flowers at Carlmont’s last home game of the season.

Carlmont came out strong in the first two innings and kept a tight defense for a 3-1 victory against Burlingame.

“We got the win, [and] that’s all that matters,” said senior Rebecca Faulkner. “We stayed in the game until the end and the heat probably got to us, but I think we did well overall.”

Carlmont kept their streak going in the bottom of the second inning with a single to right field by senior Katelyn Bacciocco. Sophomre Kelsey Ching had a sacrifice fly ball to right field to bring in Bacciocco and advance Carlmont’s lead.

Burligame managed to get a run in the sixth inning with a RBI pop fly to right field that brought in the runner at third.

“We didn’t play our best, but it was our senior game,” said Bacciocco. “It was a good way to end with a win.”

Faulkner had a total of 11 strikeouts throughout the game, bringing her total throughout her four years on varsity to 463 strikeouts.

“[I’m going to miss] the team bond,” said Faulkner. “There’s not really any cliques with our team, and we all really just get along.”

The girls, although sad to be leaving the high school team many of them had been with since freshman year, are excited for a fresh beginning.

“[I’m going to miss] everyone’s personalities,” said Pons. “But I’m super excited to be going off to college, and I can’t wait for the college experience.”

The seniors said their goodbyes to their final home game at Carlmont as they prepare themselves for Central Coast Section (CCS) Playoffs.

“[Our game plan is for CCS to] win,” said head coach Jim Liggett. “We have to get our hitting back, pitch well, and play good defense.”

Carlmont’s next game will be against Sequoia High School in Redwood City on Thursday, May 15 at 4 p.m.