Shoeboxes filled with toys light up the holiday season 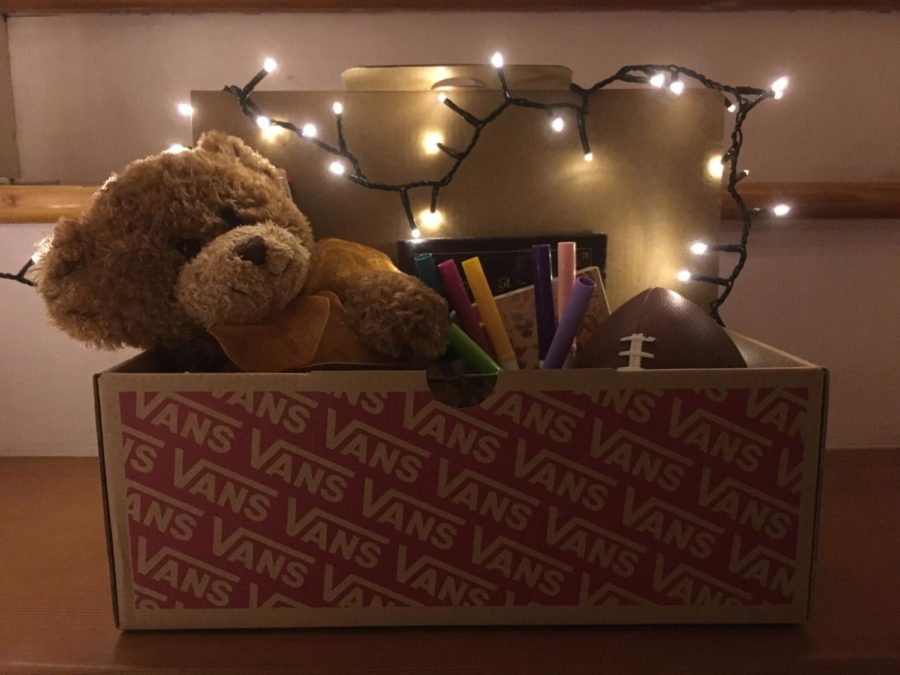 A shoebox filled with treats bring happiness to children in need during the holiday season.

Empty cardboard shoeboxes packed with toys and goodies will be shipped out to kids internationally after being donated and collected throughout National Collection Week.

Every year during the third week of November Samaritan’s Purse’s Operation Christman Child encourages those of all ages to hunt around for gifts of any kind and get together with friends and family in a packing party to fill shoeboxes. The boxes are collected during National Collection Week to then be distributed worldwide.

Jennifer Roseborough, a parent hosting a packing party for her daughter Veronica and her friends, said, “It was a wonderful way for [my daughter] to help a charity that reaches underprivileged children all around the world.”

Once packed and ready, the boxes are dropped off at checkpoints within a community commonly found at the local churches who work together with Samaritan’s Purse and participate in Operation Christmas Child.

Pastor Cesar Sie, who helped with the transportation of the boxes at the Crossing Community Church in Belmont, said that they started working with the Operation Christmas Child project about ten years ago.

“The project is about giving: giving your time, your talents, your resources to work together and brighten up [the children’s] lives,” said Sie.

Just last year, according to Pastor Sie, a total of 15,597 wrapped and ribboned shoeboxes were collected; a number they hope to surpass this holiday season.

A nine dollar donation accompaniment of every shoebox covers its transportation expenses. From the drop off checkpoints, the boxes are then all collected at an Orange County warehouse to be inspected and prepped for their journey, according to Pastor Sie.

The Orange County collection center serves as one of the several locations across the United States that are sent shoeboxes from all over the country.

Sophomore Katie Mannion, who has participated in Operation Christmas Child for four years, said, “It’s so rewarding to imagine a kid somewhere who has been made happy by something I’ve been a part of.”

Many participants feel moved by the project and find participation rewarding.

“Taking the time to think and act beyond your normal schedule, by participating in a packing party, or donating your time, money, and gifts to those who are less fortunate than ourselves can help you to really live the ‘Season of Giving’ in a way that can affect people all around the world,” said Jennifer Roseborough.

Although Samaritan’s Purse is built on a Christian foundation, the organization provides an opportunity for those of all beliefs or none at all to come together during the holiday season.

Mannion said, “I would encourage others to consider doing something like this because you never know how it may affect someone else. I think anything people are willing to do to help others is valuable, whether it’s donating boxes of presents to a charity, giving money to causes you believe in, or just being grateful for what you have and offering empathy to those who may not be as fortunate.”