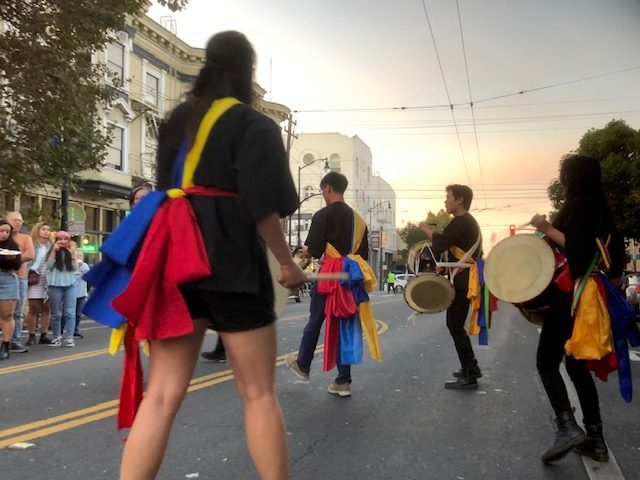 Korean drummers take over Valencia Street to perform in solidarity with protesters from five years earlier.

Few actions inspire more pride for Bay Area Palestinian activists than the blockade of an Israeli shipping line at California’s Port of Oakland on Oct. 24, 2014.

A diverse gathering of activists in San Francisco’s Mission District commemorated the five-year mark of Block the Boat, a series of protests preventing the Israeli shipping company ZMSO from depositing its controversial contents in Oakland. On Oct. 24, 2019, nearly one hundred activists gathered to celebrate their past success.

Five years ago, protesters created a picket line, and union workers responsible for unloading the ship refused to cross it, leaving no one to remove the cargo. These shipping barges carried millions of dollars of military technology from Israel to the United States. The arrival of these weapons angered some black activists who were concerned to see high caliber weapons from ships going to police officers like Darren Wilson, who shot Michael Brown, an unarmed black teen, months earlier. Similarly, the use of this style of military-grade weapon upset Arab activists who opposed their use in killing civilians in the Middle East.

Union leader Clarence Thomas, who is now retired, is a third-generation longshore worker from Local 10, one of the only predominantly black longshore workers’ unions in the country. He explained the ILWU’s history of picketing to protest against war.

“The impact of what we did, or in this case, did not do, was pretty much a strike,” Thomas said. “And we did not cross that community picket line.”

The ILWU’s actions inspired attendees of the anniversary party like Ayesha S, a San Francisco youth activist, who preferred not to use her name out of concern that she might experience the kinds of death threats Block the Boat activists received during their protest. Although she was a pre-teen at the time of the Block the Boat protests and wasn’t among the 5,000 plus protesters, she believed in the significance of diverting billions of dollars away from Israel.

“I think it’s pretty significant because it’s not only bringing awareness to war crimes, but it’s also an active, peaceful boycott of Israel,” she said. “We give Israel billions of dollars a year. With that money, we could solve the homelessness crisis right here in San Francisco. Some of that money could buy our high schools’ supplies.”

Social media orchestrated the rapid response that this movement relied on for success. Activists used Facebook and Instagram to mobilize over 5,000 protesters and managed to match the changing of the liner’s arrival time by sending out calls to action on as little as two-hour notice. When the ship tried to dock in Los Angeles, activists there took the same initiative. The message spread to London, where thousands of protesters blocked the port. Ultimately, the ship unloaded in Russia in the middle of the night and hasn’t returned to Oakland.

Party attendee Monica McAllen felt inspired by the use of social media for immediate political action.

“That showed the world that social media could gather people together for real political change,” McAllen said. “Block the Boat was one of the Bay Area’s huge successes. It’s such a wonderful tool for gathering people together who are like-minded.”

For a brief time, traffic stopped on the Mission District’s Valencia Street while Korean drummers and Palestinian dancers took over the street, symbolizing the protests that had stopped shipping traffic five years earlier.

Thomas gave historical context for the significance of the Longshoreman’s participation in the picket, beginning with its anti-fascist actions in 1934.

“Our strike shut down all West Coast ports in protest of ships carrying goods from Mussolini’s colonized Ethiopia,” Thomas said. “In 1984, we refused to handle South African cargo for 11 days. In the case of the Block the Boat, we did not work. We refused to handle the ZIM line’s cargo for not only one day, two days, or three days, but four days. It was a very significant struggle, and I was glad to have been a part of that.”