Added sugar is not so sweet 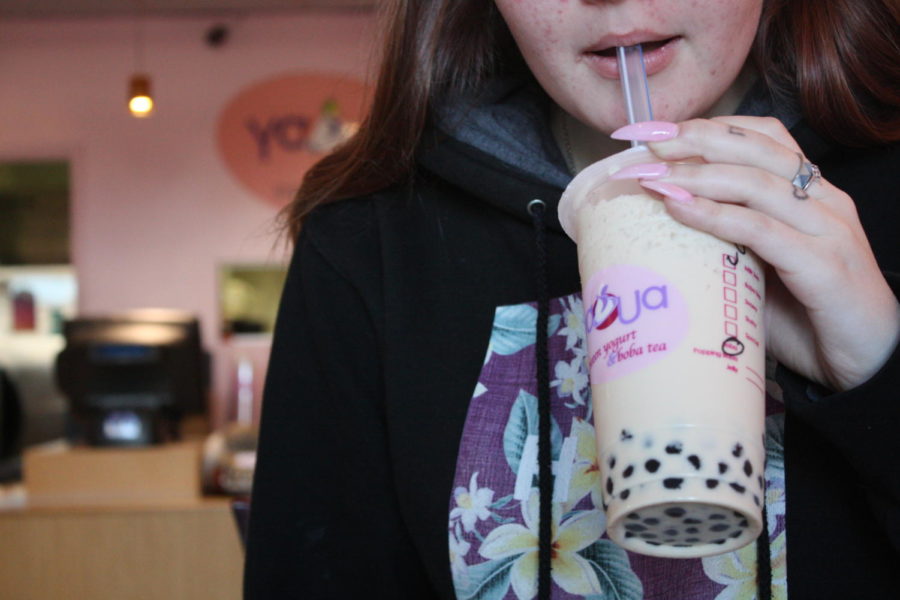 The school bell rings. Ella Reyes, a junior, walks down the street to Ya-Ua, a popular hangout spot near Carlmont. She stands in the 20-minute line to order the Taiwanese drink commonly called boba tea. It takes her less than 10 minutes to down her 16-ounce drink, full of sugar, condensed milk, and tapioca “balls.”

Within those 10 minutes, Reyes consumed around 65 grams of sugar, exceeding her maximum intake by nearly 260 percent.

And that is a problem.

According to the American Heart Association, the per day amount of sugar should not exceed 25 grams for women and 38 grams for men. However, the average American consumes about 82 grams of sugar daily, which contributes to an extra 66 pounds of added sugar every year, according to a study from the University of San Francisco.

This is more than two to three times the recommended amount.

According to The NSW Centre for Public Health Nutrition, teenagers are especially susceptible to overindulging in sugary drinks. Teen-trendy beverages like boba tea, specialty coffee drinks, soda, and energy drinks are the single greatest source of added sugar in the American diet and add little to no nutrition.

Sugar-sweetened beverages are as ingrained in the American diet as hamburgers and pizza.

“I drink Starbucks and boba tea at least four times a week,” Reyes said. “It gets me going, and I just love the taste and texture. I never get bored of these drinks because there is such a wide variety of flavors which keeps it really interesting.”

What Reyes didn’t realize is that one 16 ounce boba can contain up to 640 calories and 65 grams of sugar depending on flavorings and additives, according to Livestrong’s food database MyPlate. These numbers don’t include the sugar-soaked tapioca balls, which add up to around 150 calories in addition to the drink itself.

These numbers came as a great surprise to Reyes.

“It’s crazy to think that there is that much sugar and calories in my drink because it’s super common and no one thinks it’s that bad for you. You would think that with the amount of sugar in it, more people would be aware and not drink them, but nevertheless, they are still really popular,” Reyes said.

Regularly drinking these kinds of drinks can lead to serious health issues.

According to The American Diabetes Association, an abundance of added sugar may cause the liver to become resistant to insulin, an important hormone that helps turn sugar in the bloodstream into energy. This means that the body isn’t able to control its blood sugar levels as well, which can lead to Type 2 diabetes.

Emily Blundell, a junior with diabetes, has to constantly watch what she eats so her blood sugar levels don’t rise.

If they get too high, she could die.

“I stay away from super sugary drinks like boba tea and frappuccinos because there is so much sugar in them that if I have too much of it, it can cause my blood levels to spike which is really bad. There’s definitely way more long term consequences with having super high blood sugar then there is if you’re low,” Blundell said.

These drinks can also lead to obesity, inflammation, and an increased risk of dying from heart disease according to the National Institute of Diabetes and Digestive and Kidney Diseases.

Texas-based dietary nutritionist Lauren Kronisch promotes healthy eating habits to treat and avoid illnesses and the problems that arise from consuming too much sugar.

“The average American has too much sugar and I think drinks are some of the easiest places to alleviate some of it. People don’t realize how much sugar they are having in a drink because it’s subconscious. Most people who have a lot of added sugar, they don’t burn it off, and then it contributes to becoming overweight,” Kronisch said.

According to research conducted by The American Heart Association, cardiovascular disease, the leading cause of death worldwide, accounts for nearly 836,546 deaths in the United States. That is about one out of every three deaths. And contrary to popular belief, sugar plays a more significant role in heart disease than saturated fat. This claim is backed up by cardiovascular researcher Dr. James Dinicolantonio.

“When you consume too much sugar, especially the sugar associated with drinks, your body gets confused because of all the liquid calories you are taking in. It tricks your body into turning off its appetite-control system since calories from liquid are not as satisfying as those from solid food. This way, it’s easier for people to overindulge on sugar and calories when they drink a sugary beverage,” Kronisch said.

While drinking too many of these drinks can cause severe physical problems and even shorten someone’s lifespan, it also has very negative effects on the brain — especially the brain of a teenager.

A person’s brain does not fully develop until they are 25 years old, and the most crucial time for brain development is in its teenage years according to the University of Rochester Medical Center. For the brain to be strong and healthy, it relies on sleep, but sugar disrupts this need.

“Sometimes, I end up drinking a boba or coffee at 6 p.m. because I need energy for practice. Then, when I try to go to bed at 10 or 11, I lay there rolling around because I’m super awake and full of energy,” said Jeremiah Latu, a senior.

Like a drug, sugar gives a person a quick burst of energy but can later make them feel jittery and anxious, aka the dreaded “sugar crash.” This can wreak havoc with the body’s natural sleeping schedule.

Not only this, but an excess of sugar creates deficits in learning, memory, and attention, and slows cognitive function according to Joel Fuhrman, physician, and president of the Nutritional Research Foundation.

Therefore, students are tricked into the idea that they need sugar to remain energized and focus better, but in reality, it is only hurting them.

“I can’t stay seated in class because I’m really hyper and I want to run around. I find that when I have too much sugar I don’t understand the notes I’m taking because I’m thinking about other things,” Latu said.

Various studies have revealed that marketing of sugar-sweetened beverages is aimed towards children and teenagers.

In 2013, beverage companies spent $866 million on advertising unhealthy drinks to these critical audiences according to a report by the Yale Rudd Center for Food Policy & Obesity.

The advertising is portrayed in many different ways. Beverage companies have found ingenious shortcuts to give people faster and easier access to their product, which increases sales significantly.

“A lot of these sugary drinks are really publicized, and it targets teenagers because it’s really easy to get,” said Alyssa Kent, a freshman. “Now that Starbucks and many other stores have mobile order, I can just go on my phone, and I don’t have to wait in line anymore.”

“Companies know that teenagers want to do whatever their friends are doing and try whatever they are trying. They use social media to post a picture of a celebrity drinking a boba or a red bull, which makes you want to buy it too,” said Hannah Stulbarg, a sophomore. “Everyday, I see people posting pictures of their boba or their Starbucks on Snapchat because when you get it, it’s like, cool.”

And companies know this. In fact, one-third of consumer purchase choices are based on packaging according to Verónica Maria Jarski of Marketingprofs.com.

Factors such as the color of a cup, what is written on that cup, and the unique design on the cup plays a massive role in the number of drinks that will sell.

Therefore, some businesses intentionally change the design of their packaging to attract younger customers and obtain greater amounts of money.

Kent said, “The seasons keep it interesting. Honestly, it’s the way they decorate their drinks because it makes me want to take a picture and post it because it looks cute and makes me feel trendy.”

While it may be difficult for someone to completely cut sugar out of their diet, there are a wide variety of healthier alternatives to try that will benefit someone’s mental and physical health dramatically.

Substituting condensed milk and non-dairy creamers for low fat or almond milk in tea and coffee drinks will lessen the amount of sugar and calories in the drink according to Kronisch.

Asking for less sugar and no flavored syrup can also contribute to making the drink healthier.

“After hearing this information, I’ve started to get tea without milk and less tapioca. It’s still just as good, and it doesn’t hurt my stomach as much,” Reyes said.

Some simple things a person can do to avoid tons of excess sugar and calories with no extra cost is to avoid tapioca pearls, whipped cream, and other toppings on their drinks.

Savannah Ponce, a sophomore said, “Every Tuesday at Tpumps, someone can get a 24 oz boba for the same price that a 16 oz one would usually cost. I guess this tricks people into consuming more sugar and calories than they think.”

Some ways to satisfy a sweet tooth is to eat fresh fruit because it does not have artificial sugars or unnecessary calories. It also fills the body up with nutrients that it needs. According to the nutrition app ChooseMyPlate.gov, dietary fiber from fruits helps reduce cholesterol levels and can lower the risk of heart disease

“I love fruit because it’s refreshing, it tastes good, and it makes me feel healthy. I think it’s a really good alternative to the fake syrups and juices they put in tea drinks,” Latu said.

Even though these popular drinks are unhealthy and do not have many nutritional benefits, it is okay to have them occasionally. The key is to maintain moderation.

Kronisch said, “Sugary drinks should be an occasional treat instead of a daily drink. It should be something you look forward to, not an addiction.