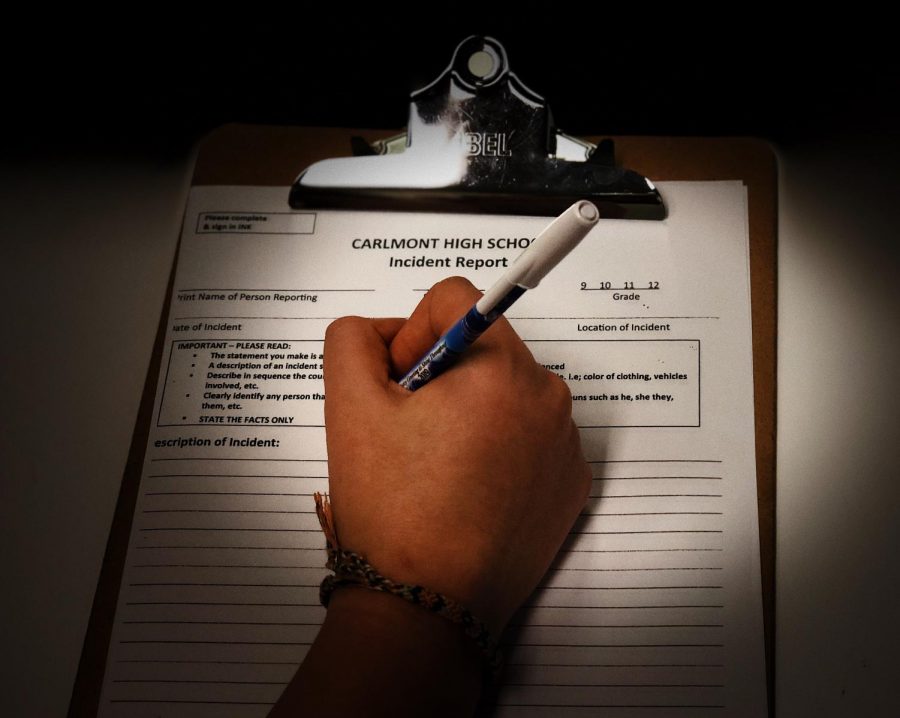 Students must fill out this report after getting involved in any kind of incident.

Blood and hair all over the floor was not an uncommon sight at Carlmont High School when it came to fights in the 1990s. But today, Carlmont’s administration has been trying to diminish that reputation and flourish friendships with students.

Since the ’90s, fighting in schools has decreased immensely, but the number isn’t as low as many would think. According to a UNICEF report that came out in 2019, around 150 million students have faced some form of bullying, whether it is physical or mental. Carlmont’s administration tries to keep that number low by sharing connections with the students rather than being strict or brutal.

An example of this form of authority is Assistant Vice Principal Gregg Patner. Over the five years that Patner has worked at Carlmont, he has had to only deal with five or six fights. He believes that the number of fights is so low due to the environment that the staff has built amongst the students.

“When things boil over, students come to talk to a trusted adult. We have a great presence on campus, which can lower the rates of fights if they know there are eyes on them,” Patner said.

“The administration at the time wasn’t very consistent. They would usually suspend the students and eventually expel them if they fought multiple times. Still, no one took suspension too seriously,” Rodriguez said.

Today, when a student gets suspended, it’s often a big deal. However, a suspension doesn’t just affect a student socially but also academically. While on suspension, since they cannot attend school, students are taken away from their learning environment. Sometimes, students may think that the punishment is rash, but the administration tries to think about how the incident affects everyone, even those not directly involved.

“Let’s say I get into a fight with another student, and then I’m sitting next to you in class the next day, are you able to learn?” Patner said.

Recently, Brady Greene, a sophomore, was suspended. He has taken this time off to reflect on his actions and understand why the administration acted as they did.

“It helped me learn to think before I act, but I also think the punishment was a bit severe. But I appreciate what it taught me,” Greene said.