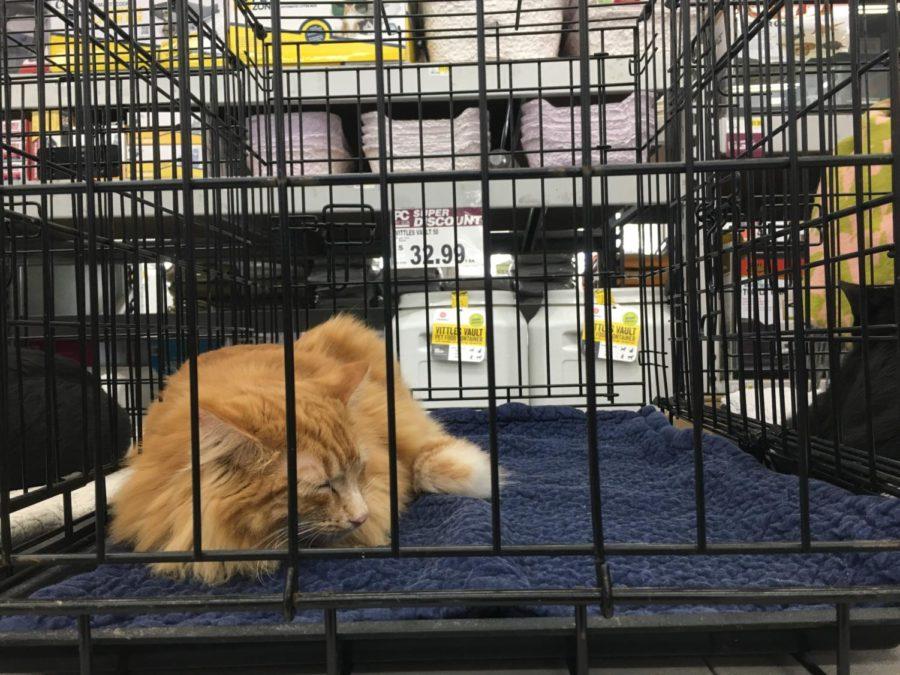 One of the rescued cats naps in its cage during the adoption fair at Pet Club.

With so many homeless cats and kittens around the world, including an estimated 70 million homeless cats in the United States alone, adoption fairs make it possible for them to find new, loving homes.

The Pet Club in San Mateo contributes to this effort by hosting a weekly cat and kitten adoption fair.

“We have the fair every Sunday from 12 to 3 p.m.,” said Renate Schmidt, the event organizer. “The only times the fair will be closed is during holidays or if the actual store is closed on that day.”

The organizer and the volunteers are an independent group of rescuers. Once they trap the cats, they have to go through a process of vaccination, microchipping, etc.

“All of the cats we have here have to get vaccinations and have to be prepared to be adopted,” Schmidt said. “Based on how many cats we trap, we usually get from 10 to 20 cats at the fair.”

According to Su Saperstein, a trapper, the cats at the fair are not free. Most of the time, one cat is $60 and a pair would be $100.

“We don’t want to give cats away for free because then people don’t attach value to them,” Schmidt said. “Sometimes when shelters have free giveaways, we end up with those cats because people didn’t want to take care of them anymore.”

Most of the cats the trappers get are feral. However, some of the trappers work with other non profit groups to help them catch more cats.

“Sometimes we get calls from the Homeless Cat Network so we just go and trap that cat,” Saperstein said. “Once we do that, we can start going through the process of socializing them.”

According to Schmidt, many of these cats come in pairs because they like to socialize and don’t do well alone. However, some cats don’t react well to being with other cats or kittens.

“We let people foster the cats to see if it’s the right match, especially when they already have another cat or pet at home,” Schmidt said.

Getting people to adopt these cats can be tough, however. Since the fair is in a pet store, most people who come there do so because they already have a pet, and don’t need another one.

According to Schmidt, if someone plans to adopt, they have to fill out a form. In addition, the trappers will pay house visits to check up on cats.

“When someone wants to adopt, we need to make sure their landlord allows pets,” Schmidt said. “We want to make sure those cats get into a nice home.”