All sports are team sports

Even those deemed individual sports incorporate a team mentality 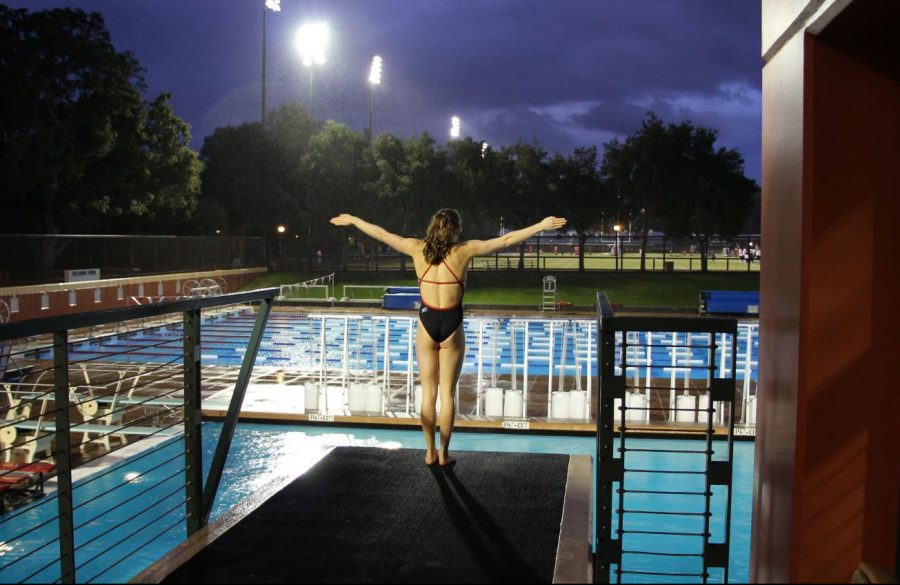 Melina Dimick, a senior, stands at the edge of the platform in preparation for a dive.

Standing alone on the floor, on the diving board, on the track.

No one else is there except the eyes of the audience.

Except that is simply not the case.

Melina Dimick is a senior who dives at Stanford Diving Club and plays water polo on Carlmont’s varsity team, so she has experience in both worlds of individual and team sports.

“At diving, we have a team of only seven people and at water polo, we have 14. But for both, there is a strong feeling of community, and we have that shared experience of the sport and all the inside jokes,” Dimick said.

Dimick described the different types of sports at practice as being a similar team environment, and that even though the diving team is not as big and they do not compete together, they still feel like a team.

Emma Elliott, a member of Carlmont’s varsity swim team and the Otters swim program, agreed with this sentiment.

“Swimming might seem like an individual sport, but especially during the high school season, there are always people cheering at the end of your lane and encouraging you from the deck. It’s times like those that definitely make swimming feel like more of a team sport,” Elliott said.

Not only does Elliott feel like a strong part of her swimming team, but she has also formed great connections with her teammates because of swimming.

“I would sometimes even consider my swim friends to be even closer than my friends from school because in the middle of a really hard workout, they’re always there to support you and cheer you on. I think we really bond at practice and it brings everyone closer together as a team,” Elliott said.

Zoe Kelemen is a former gymnast at Bayshore Elite and former track athlete at Sequoia High School, where she attends as a junior. Kelemen now dives at Stanford Diving Club in the same group as Dimick.

“The feel of all three sports is the same. I would say with track it’s slightly different because you’re running right next to multiple people, so there’s more cheering throughout, but I’d say that the support you get from your teammates is similar for all three,” Kelemen said.

Kelemen experienced a team feeling from all three sports, but there is still an individual aspect to each.

Yet, there is a sense of independence that seems to be present in all sports, even in traditional team sports.

For example, in softball, players work on a team together to accomplish the same goal, but the result of the entire team is heavily based on the actions of the individual players.

Carlmont softball team member Sofie Hai, a sophomore, can attest to this feeling while playing.

“There is some element of individuality on the softball team. Everyone has their unique position so there is an element of solidarity in it where you’re not together all the time,” Hai said.

The different positions in softball can compare with different teammates on a swimming team. They each do their part in order to help the team as a whole, which is something that both types of sports have in common. Although both team and individual sports share these traits, there are still aspects of each that make them unique.

“The main difference between team and individual is that team sports are more physical and individual are more mental. For me, I can get in my head at diving and lose a skill or be really worried about a particular dive at a meet. With water polo, it’s very go-go-go and you don’t have the time to stop and worry like you do in diving,” Dimick said.

Dimick also mentioned how, at water polo practice, everyone does the same drills, but at diving, people focus specifically on what they need to work on. This difference in structure is another contrast between individual and team that not only Dimick can attest to, but also gymnastics coach Kat Pachinger.

Pachinger has a long history of being involved in individual sports. She did club gymnastics throughout her childhood and up until high school graduation, where she went on to do gymnastics at Sacramento State. She now coaches at Bayshore Elite Gymnastics and is also part of a CrossFit team.

“I loved my club teammates and most of them are still my friends today, so I try to foster that same sort of team sportsmanship with the girls that I coach now. Even with that spirit, I still have to individualize my coaching because each girl has a different path, and I need to coach towards their individual needs in order to have our team be successful as a whole,” Pachinger said.

Despite these differences, it is clear that no matter which sport an athlete is a part of, they will have people around them to rely on and support them.

“I feel like when I was around my teammates, everything was more fun, and I didn’t want to let them down at competitions. I wanted to perform the way that I trained in practice, so having them there as a support system helped me achieve my goals as an athlete,” Pachinger said.