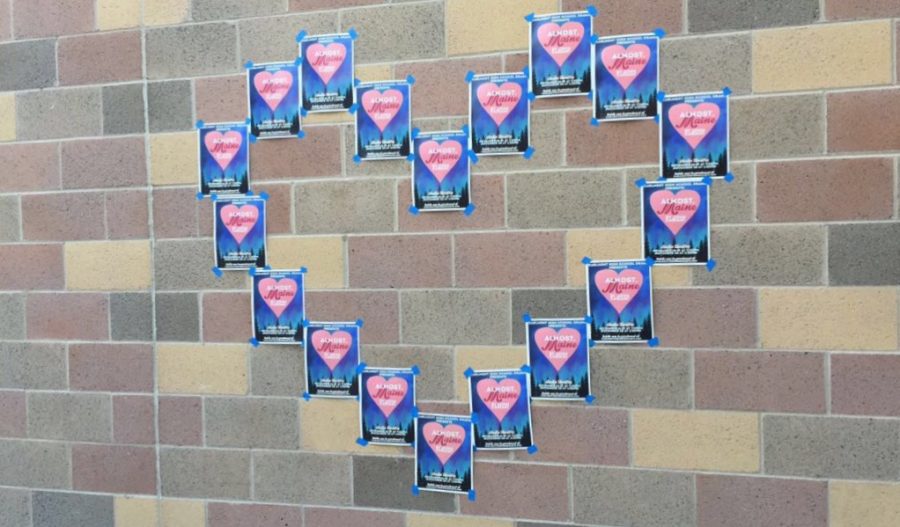 Outside of the drama room, "Almost, Maine" flyers have been put up to catch the eyes of students.

This year, Carlmont drama will tell a story of love, loss, and unfortunate endings, all under the northern lights.

“Almost, Maine” is a play by John Cariani consisting of nine love stories all in the small town of Almost.

“I think this play will be a really fun show,” said junior Jasmine Zang. “It’s not like other shows that drama has done in the past where you have to follow the same plot for an hour. You get to meet new characters and hear new stories.”

Cast members have been spreading the word about the play to students through social media and flyers posted all over the school.

“I have heard a lot of talk about the play and have some friends in the cast as well,” said junior Tamara Shamieh. “It’s undecided whether or not I will go, but it looks interesting.”

“Almost, Maine” is a romantic comedy that may pleasantly surprise many students with its winding plot.

“I like movies that have alternate endings, so I think I will enjoy the play,” said Shamieh. “As much as I love the classic rom-com, I think ‘Almost, Maine’ will be a good kind of different.”

For some students, the yearly plays put on by Carlmont drama are fun means of entertainment.

“I think seeing ‘Almost, Maine’ will be a fun activity to do with friends,” said junior Emma Armstrong. “It’s a better and cheaper alternative to going to the movie theater.”

As the play comes closer, the cast prepares to make it the best show yet.

“We have put our all into ‘Almost, Maine’ and have been rehearsing for weeks after school. We would love it if people came to support us,” said Zang.