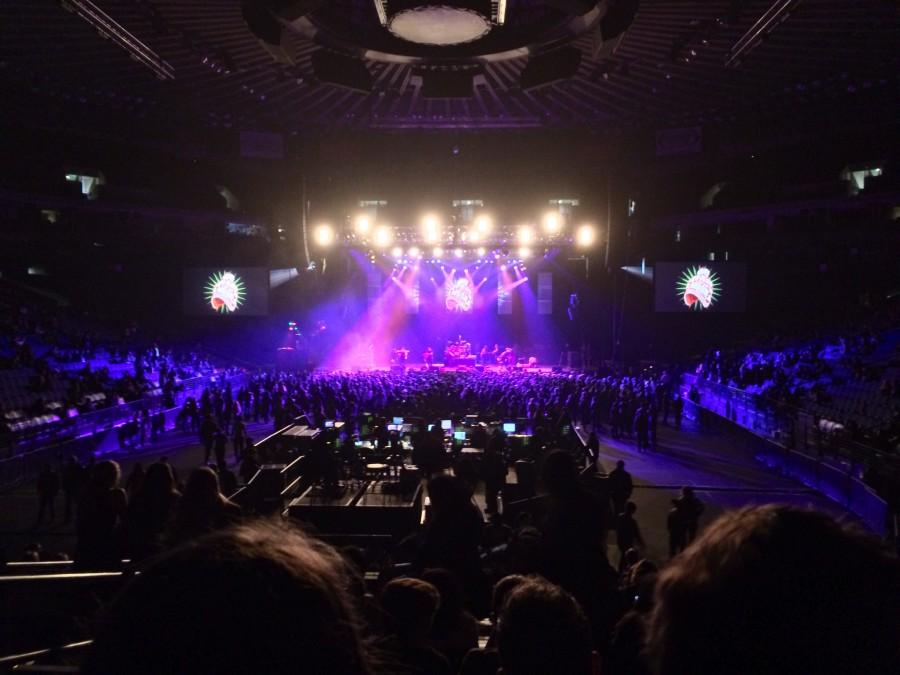 On Dec. 7, the second night of Live 105’s musical event, Not So Silent Night, the crowds were large and the anticipation was huge. With performances from many alternative powerhouses, the concert was surely a night fans could never forget.

The event was held at the Oracle Arena in Oakland, Calif. where fans from all over the Bay Area gathered to enjoy performances from bands and artists such as The Neighbourhood, Bastille, Lorde, Alt-J, Phoenix, and Arcade Fire.

The emcees walked onto the stage (with a surprise visit from Santa) to the roaring crowd and introduced one of the year’s newest alternative rock bands, The Neighbourhood. Although the audience was small at first, they enjoyed their performance with songs like “Female Robbery,” “What Do You Want From Me,” and their popular single, “Sweater Weather.”

Despite ticket prices ranging from $70 to $150, food was still expensive, lines were long, and merchandise sold out quickly, although this is expected from any concert venue. Yet, no one can deny the experience of seeing their favorite artists perform live with a heavy bass vibrating through the stadium and many other fans to share the experience with.

Second up was another new band all the way from England, Bastille, whose songs brought people to their feet. The audience couldn’t help but sing along to their many hits such as “Bad Blood,” and their hit single, “Pompeii.”

The performance vocals were top notch and almost replicated the studio versions. Some surprise crowd interaction such as crowd surfing brought even more excitement to the concert and made the arena all the more energetic.

The third artist to perform came all the way from New Zealand who, the day before, had been given four Grammy nominations. 17-year-old Lorde started her biggest stadium performance ever to some technical difficulty and sound problems, but all was forgiven once she began to perform.

Lorde’s style of performing seemed odd at first, but it invited the audience to feel the music and the heavy beats. She performed many songs off her debut album including “Ribs,” and the chart-topping single, “Royals,” which got everyone singing.

Up next came Alt-J from England who sang songs off of their debut, “An Awesome Wave.” Their soft acoustic songs swayed the crowd and invited people who knew the lyrics to sing along.

The band Phoenix from France performed next and really got the crowd excited. The arena lit up like it hadn’t before as Phoenix performed their upbeat hits from “Entertainment” to “Listzomania,” turning the arena into a dance floor.

Finally, the event ended with arguably the most popular band of the night, Arcade Fire. Even as the audience grew tired, people still managed to enjoy the band’s disco ball-lit performance appropriate for their newest release, “Reflektor.”

Even with a few slips here and there, it was still worth the ticket price and definitely would leave anyone who missed out jealous. Overall, night two of Not So Silent Night left the fans with an energetic concert experience that they’ll never forget.