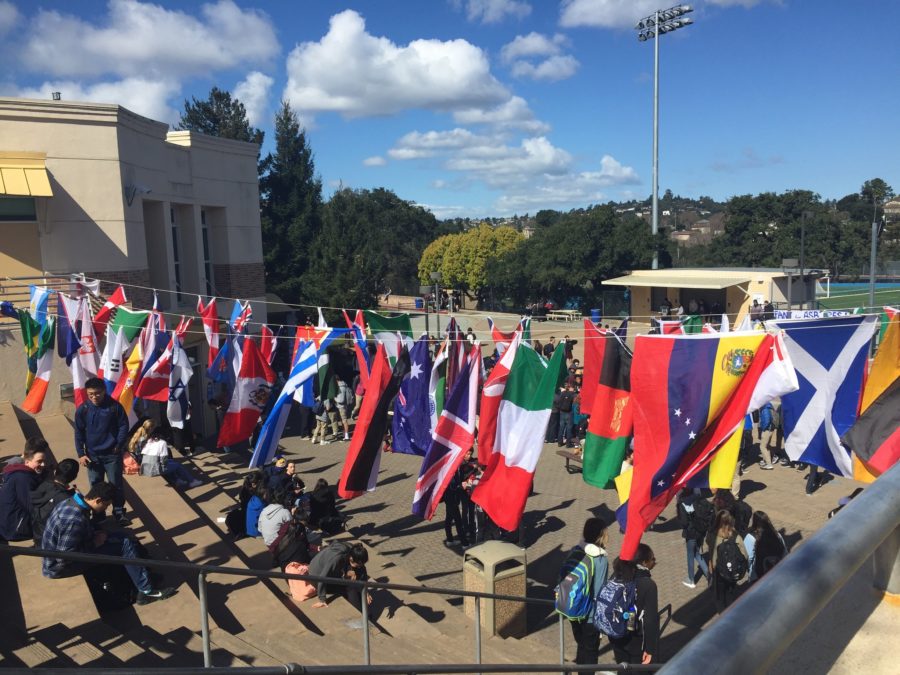 In spite of what news reports say, Carlmont is not anti-Semitic.

The recent uproar over the chalk swastikas that were drawn by the bleachers and outside the gym, partnered with alleged derogatory comments made to a Jewish student, have led to a series of meetings, articles, and discussions about a potential anti-Semitic rise on campus.

Media companies such as NBC, the San Mateo Daily Journal, and others quickly picked up the story.

Good, accurate reporting from these publications eventually snowballed into rumors and half truths being spread by people and other publications.

At the same time, students were spreading the news around campus by word of mouth and social media.

Somewhere along the way, the story became like a game of telephone. Rumors became “facts,” and these “facts” were picked up and used to fuel a broader, inaccurate narrative, painting a picture of the school as anti-Semitic.

This is not OK.

News publications need to hold themselves to higher standards, especially when reporting on such a controversial issue.

According to Principal Ralph Crame, there were three incidents of anti-Semitism on campus. The first involved students taking chalk from a lunchtime activity and writing a discriminatory message on the ground near the gym. Then, another act of graffiti occurred when there were swastikas drawn around campus. Finally, it was reported that a student allegedly made a racist remark to a Jewish student waiting to get picked up from school.

All students who took part in these incidents were disciplined, and fifth-period teachers were instructed to remind all of their students of Carlmont’s respect policy.

In addition, the administration has already begun working on a potential event for next school year to educate students on the importance of tolerance and respect towards all religions and ethnicities.

Many of the articles published and circulated regarding the incident use the same picture of the chalk and an anonymous quote from a Carlmont student.

One publication, Every Day Anti-Semitism, published a statement that students had been chanting “kill the Jews” in Carlmont’s stadium earlier in March.

A quick Google search of this phrase shows 107 thousand results, the top 6 of which are sites that have picked up this exact phrase about the stadium to portray Carlmont as anti-Semitic, in spite of the fact that none of them have provided any specific source to affirm this claim.

While many people have been making the argument that there is more to the story, and they have “proof” that the acts were directly motivated by anti-Semitic hatred, the lack of specificity and of these claims should make one question the authenticity of them.

Carlmont has no official stadium, and there were not any situations in March where there was a large crowd of students gathered at the bleachers chanting such words. Crame stated that this incident never happened anywhere on campus.

People tend to overlook facts in favor of emotion. It won’t matter to some readers that this wasn’t said in those words, at that place, at that time. The people involved will instead argue that someone said something to someone somewhere, and that’s all that matters.

Carlmont parent Cheryl Selman, a member of the Jewish community who has been one of the people working with Crame on these incidents, said, “I don’t think Carlmont is a more anti-Semitic school than any other in the area, and I think there are people who have reported things in a way that makes it look worse than it was, and I think that’s because they have an ulterior agenda.”

Selman believes that in the future, Carlmont should focus on establishing a proactive way of teaching students against prejudice.

We aren’t trying to downplay the real events that did occur at our school or diminish the concerns about anti-Semitism and bullying; however, it is important that these incidents are accurately reported on.

These kinds of incorrect statements and misleading information occur when journalists pull quotes and facts from other articles without checking directly with the source, as they did in this case.

There was also a general lack of informative sources, as only one Carlmont student was quoted by name in any of the published articles.

The student who was initially quoted, Sarah Selman, a junior, said about the media coverage, “I found it really unfortunate that more students weren’t interviewed.”

A few articles that failed to mention all the details, combined with rumors spread throughout the community, have resulted in the false claim than Carlmont accepts anti-Semitism.

One look at the Carlmont High School Facebook page will reveal reviews expressing disgust and disappointment with the school, and even a few requests for Crame to step down.

However, Crame had already acted according to district policy and Education Code by taking action against the students who had committed the acts and had reiterated to the student body the importance of following the respect policy.

“I don’t feel that Carlmont is a negative environment, but just like most schools there are students who perpetuate a negative school culture. As long as these students are educated and/or disciplined (which I do believe occurred), and the proper steps are taken to assure that other students feel safe and this doesn’t happen again, then I believe there is nothing to worry about,” said Sarah Selman.

The way this story has blown up demonstrates the chain reaction of media and how a false narrative can spread.

Using the actions of two immature students as the basis to slander the school as being anti-Semitic is an overreach. The reality is that a lot of high school students, particularly underclassmen, do not have a full understanding of how their actions and words can impact others.

After speaking with the students responsible, Crame stated that he believed, based on the conversation, that the perpetrators had committed the anti-Semitic graffiti out of ignorance, and had not done so with the purposeful intent of spreading hatred of the Jewish community.

Just as it is unjust to assume that all Muslims are terrorists because of how the media has extrapolated upon the acts of a few people, it is also unjust to fault an entire school and community for the impulsive and uneducated acts of a few students.

An extremely negative connotation of Carlmont and even the City of Belmont has emerged as a result of the negative portrayal by the media.

Yes, the community is now aware of all the anti-Semitic incidents that occurred on our campus, but the school, the students, and the community are also being implicated as perpetrators.

There is no doubt that when something like this happens at school, it needs to be publicly addressed. However, because the topic was not properly reported on, Carlmont has now been inaccurately stereotyped as an anti-Semitic school and community.

If one walks through the hallways on any given day at lunch, they may see a variety of clubs meeting, including Jewish Club, Christian Club, Muslim Fellowship Club, Gender Sexuality Alliance, or Feminist Club, not to mention the 90 some other official clubs on campus who all display the diversity and acceptance that Carlmont has and continues to strive for.

People often believe what they read without question, especially when it’s shared on social media by a friend or reliable source.

Around 64 percent of U.S. citizens stated in a Pew Research poll that fake news had caused confusion for them in regards to basic issues and events. However, 23 percent of the same group admitted that they had shared a fake news story at some point, whether it was knowingly or not.

Students, staff, and members of the community need to confirm the authenticity of all sources beforehand and take responsibility for what they share.

Regardless of accurate or ethical reporting, the events that occurred at this school over the past few weeks should be neither downplayed nor ignored. Instead, Carlmont should take the opportunity to come together as a school and show that we can unite and stay strong in the face of conflict and misinformation.

Edit: An earlier draft gave the impression that the San Mateo Daily Journal and NBC News had printed unsubstantiated claims. This has since been revised to reflect that their reporting was appropriate, but other organizations spun off of their original stories, leading to rumors and poor reporting.