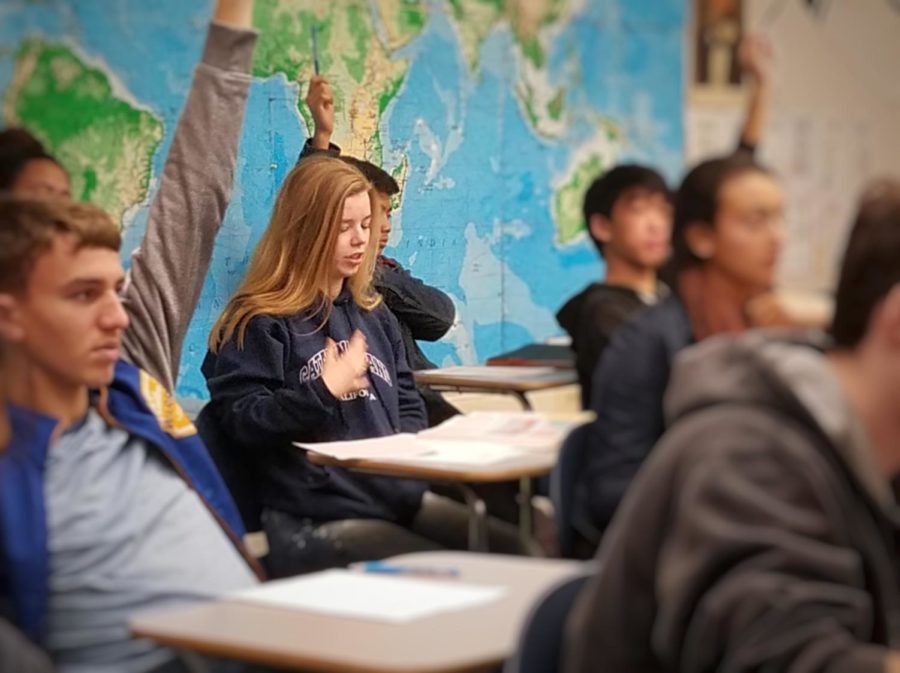 Sophomore Sophia Krackov answers a question in her AP European history class. Krackov said, "You definitely have to be committed in order to do well."

“I didn’t sleep last night because I had to finish my outline.”

This is a sentiment felt by many advanced placement (AP) European history (APEH) students. For many of the students, APEH is their first AP class, and many of them are unaccustomed to the class workload.

American culture has always told high school students to take AP classes in order to impress colleges. As a result, students sometimes find themselves overworked and burnt out in an AP class that they are not passionate about.

Carlmont counselor Connie Dominguez, who is also an admissions officer at UC Davis, said, “I have students that feel like they have to take AP classes to get into a good college when that’s not the right place for them.”

Many teenagers wonder if taking an AP class is worth the stress and work that it brings. In fact, although students’ scores have risen in the past ten years, the overall passing rate has dropped by 4 percent, according to Politico. This is attributed to students taking more than one AP course at once, the website reports.

Despite the strain of an advanced class, many students still choose to take an AP course for its intended reason: academic enrichment in subjects that they enjoy.

Sophia Krackov, a sophomore who is taking AP European history, said, “I’ve always liked history and the GPA boost is definitely a perk. I also wanted a challenge because last year I was not challenged at all in history.”

However, for Krackov, taking an AP class also made her realize how competitive Carlmont academics can be.

“Last year, I was the smartest one in my history class, and now, it’s like, ‘Oh look, there are smarter people now, you’ve got to do better,’” Krackov said.

While AP courses can give students the enrichment they need, they can also expose a student’s interests and weaknesses. This attribute can help narrow down students’ ideas of the careers they would like to pursue after college.

Yannie Lam, a junior, said, “Through AP biology, I figured out that I wasn’t really interested in biology, and it’s not one of my strong points. So, it’s definitely given me an idea of what I’m good at and what I should consider as a career.”

AP classes are often more demanding than regular level classes because they are designed to be similar to a college course. Near the end of the school year, the students take an AP test in their respective subjects.

Consequently, AP teachers spend much of the year preparing students to take the standardized test.

Dominguez said, “Teachers have to cover certain non-curriculum by the College Board in order for the students to take an AP test in May. So, the pace isn’t at the teacher’s discretion; they have to get their students ready and sometimes that could move at a pretty fast pace.”

In comparison, the regular classes offer a slower alternative to the rigorous AP classes because there is no hurry to prepare the students for the AP exam.

Dominguez said, “Regular college prep classes have to comply with the district curriculum, and UC (University of California) A-G protocols, so the pressure is not there to cover a certain amount of material by a certain date.”

However, some students may not have the choice to pick between AP and regular classes.

Mackenzi Rauls, a sophomore, is a member of the biotechnology institute program, which limits her from taking AP classes.

“The pace of modern European history is kind of slow even compared to last year in World Studies, where we spent a week on one section of the chapter,” Rauls said. “ Now we spend three weeks on two sections.”

Jayson Waller, who teaches modern European history, AP European history, and AP U.S. history, said, “The main difference is the book. I would argue that you actually go more in-depth in AP because you cover less and go slower in modern, while you learn more and go faster in AP.”

However, the divide between AP classes and regular classes has not always existed. According to the New York Times, AP classes began in the 1950s due to the Cold War because Americans were worried that their children were falling behind the Soviet schoolchildren. As a result, the AP program was created to push American children to compete with others on a global scale.

Now, the program has evolved into a way for colleges to measure the academic abilities of high school students across the country.

“The reality is, if your school has AP classes, the colleges expect students to take them,” Dominguez said.

However, Dominguez does not want her students to feel pressured into taking classes that they are not prepared for.

“You can take community college courses over the summer and that speaks just as loudly as an AP class, with or without the stress,” Dominguez said.

According to Dominguez, Carlmont has an open door policy with AP classes. That means that a student does not need to take a test to qualify for an AP course.

Of course, this means anybody could take AP courses— even if they are not fully prepared for the strain and workload of the class.

Some students, meanwhile, see the work as a byproduct of the learning process.

Lam said, “I have gotten a lot out of my AP classes, but I have also given myself a lot of stress. Overall, I have definitely learned a lot, and I’m really happy that I get more out of the class.”

Many students in AP classes have also learned to push themselves to try harder.

Krackov said, “I’ve definitely learned that an extra effort pays off —that extra bit of studying could earn you one more quiz point.”

In a competitive environment such as Carlmont, certain stereotypes are projected onto AP classes. However, not all of them are true.

Krackov said, “I think that among students, you tend to see the idea that the more AP classes you take, the smarter you are, while that’s not really the reality; you take the classes because you’re more willing to take on a harsh workload.”

For students who are worried about whether or not they are ready for a certain AP course, the biggest indicator of proficiency may be their reading level.

Waller said, “If you’re an AP student, you’re expected to read at or above your current grade level.”

“Even if you’re super interested in the course, if your writing is less than stellar, that’s going to be a problem because you do more writing in AP, and it’s timed writing,” Waller said.

In the end, the AP program may help to supplement one’s college applications, but only if it is taken to serve one’s interests.

“Students should be thinking about why they’re taking an AP class — they should talk to their teachers, their parents, their counselor, and look up the AP credit policy at the schools they’re trying to get into,” Dominguez said. 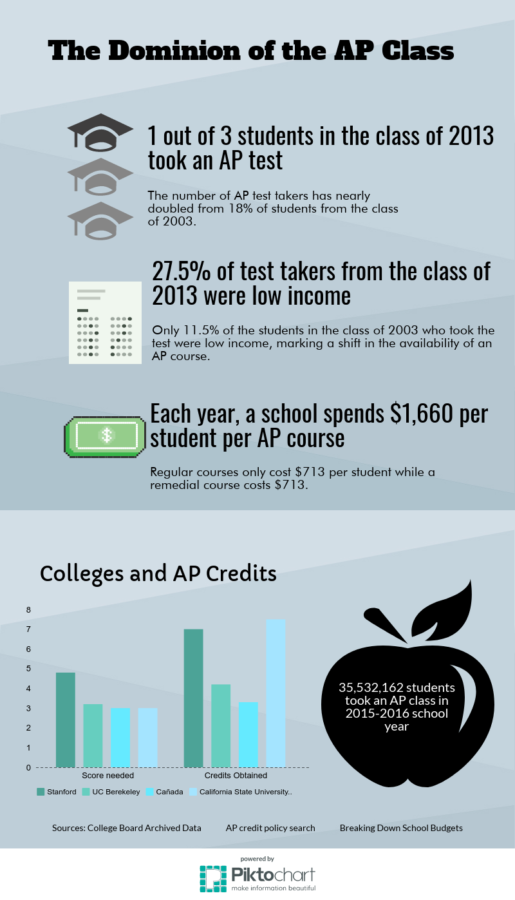