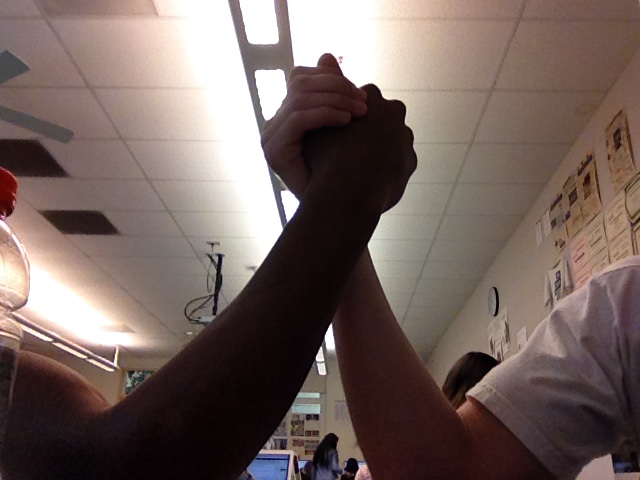 Only a few students participated in the arm wrestling competiton

With the end of the year approaching, students are starting to prepare for finals, and an arm wrestling competition.

Like every year, students try to make sure that they can maintain good grades so the finals wont effect them.

“I make up all the zeros I have and turn in all of my homework so I don’t have to stress out over the final,” said junior Daniel Morrow.

There are only two weeks left and the only thing students are thinking about is summer, not an arm wrestling competition.

ASB’s freshmen class officers created an arm wrestling competition hoping it would be a big hit, but it ended up having the opposite effect. There are only four or five people in the competition, which is taken place at lunch.

The competition is a new idea, so why is it not having a success? Students like the idea, but their are a couple things that make them shy away from the competition.

The competition takes place in the quad where everybody can watch. With that being said, some students would be embarrassed to lose in a contest involving strength.

“Guys take pride in being strong or what people call ‘being a man.’ So losing an arm wrestling competition in front of the school would be embarrassing,” said sophomore Brandon Burkholder.

Along with the embarrassment of losing, students are in the final stretch run of school, which means students rather focus on school than a competition.

“I have a lot of work due in the next couple of weeks right before finals. I would’ve joined the competition, but I need to do class work during lunch time,” said sophomore Troy Rice.

Overall the students thought it was a great idea, but they should have it earlier in the year.

“I think a lot of students just want school to end and are not really into school spirit right now. I think it would’ve been different wasn’t so close to finals,” said Morrow.