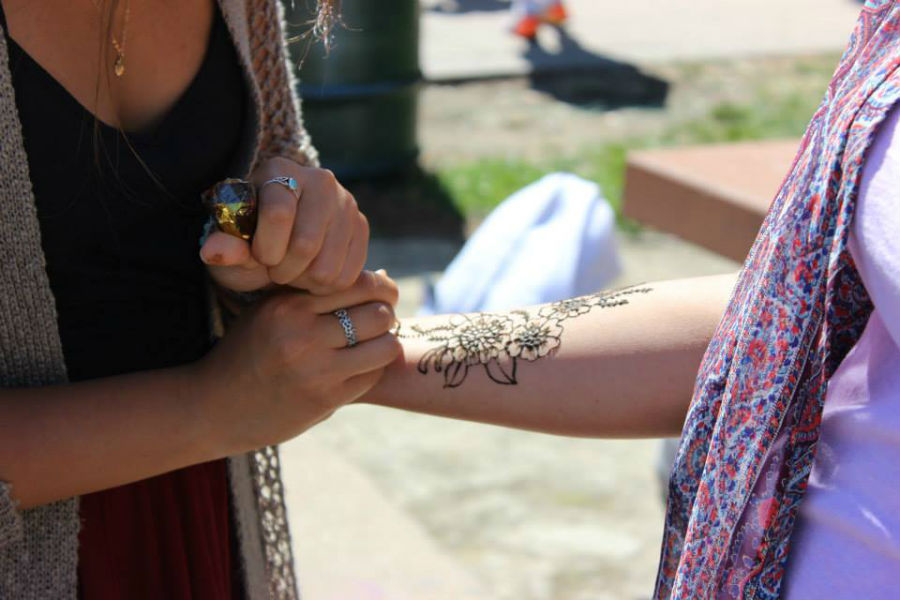 Senior Emma Lin adds the finishing touches to a student's henna tattoo at the Club Fair.

Carlmont’s Art Club was originally created with the singular goal to foster the creativity of its members.

While this goal continues to be a primary focus of the Art Club, this year’s president, Tina Enkhbat, and vice president, Amber Governale, have added to the club’s growing list of ambitions.

Governale said, “Within this year, we aim to decorate the school’s campus with stencil designs and a mural painted by former Carlmont students.”

In addition to establishing tangible changes on campus, Enkhbat and Governale plan to fulfill the club’s original goal of inspiring student creativity. Governale said, “We want to encourage students to exercise an artistic mindset. To do so, we have planned field trips to a number of different art museums in hopes of inspiring our members.”

With it’s creative fundraisers and talented members, Art Club has begun this year with a positive step towards its many goals.

Governale said, “Although many of our plans call for a liberal amount of funding, we aim to raise money through henna tattoos, bake sales, and whatever else we can think of.”

Both Governale and Enkhbat ultimately aim to make Art Club, one of the older clubs at Carlmont, even more interactive and inclusive than it has been in the past.

Governale said, “We are trying to expand Art Club to anyone and everyone with an interest in art, regardless of their skill level. If everyone who is looking to be inspired finds their way into Art Club, it would be a great year for both the students and campus of Carlmont.”