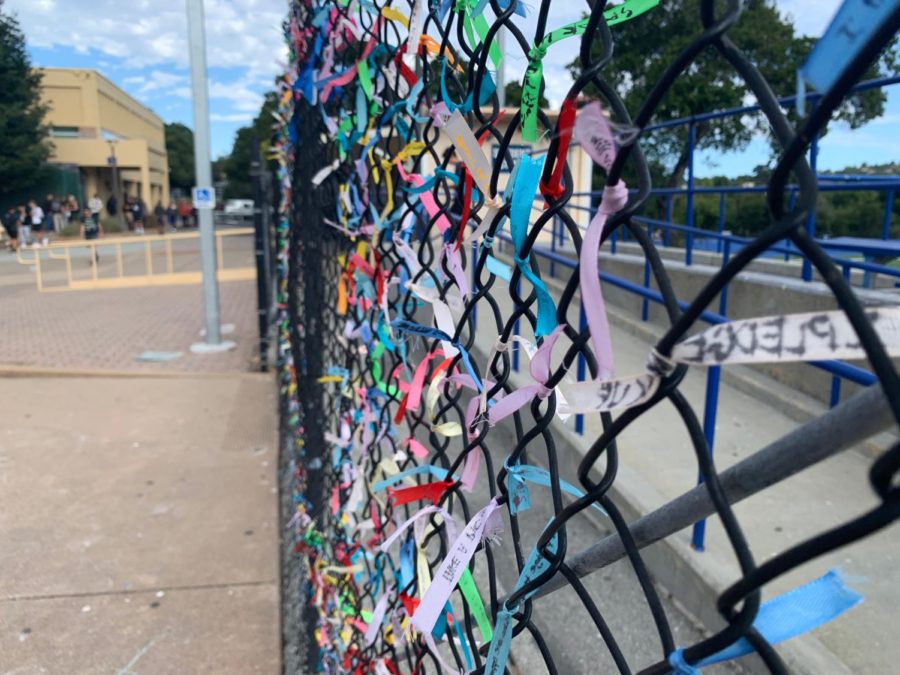 Students can view the ribbons on a fence in the quad.

During this year’s “One School, One Book” event, a new activity was added to increase student engagement.

Conducted by the ASB Do Something commission, students were instructed to write a pledge on a ribbon. Later, the ribbons were attached to a fence in the quad for students to view them.

The project idea stemmed from various members of the school’s community such as Kelly Redmond, an English 1 and English 1 Support teacher.

Redmond wanted to find a way for more kids to get involved with the summer reading book. The Do Something commission was tasked with taking on this challenge

“After discussing the different requests and inputting our ideas, the commission decided to incorporate a physical aspect for the pledge,” said Ryan Irwin, a junior.

Irwin is a member of the Do Something commission and has been a part of multiple ASB events including the blood drive and food drive.

Having students write out their pledge was done to prompt participants to think about how they could improve their lives academically or socially.

“In my opinion, the concept of writing a pledge is very beneficial because it allows students to demonstrate a positive contribution to the school’s environment,” said Ryan Chun, an Algebra I teacher.

While numerous people liked the concept, there were a few difficulties that prevented some involvement.

“My teacher didn’t explain the objective clearly, so no one was sure what they should do,” said Sarah Drayer, a junior.

Although some didn’t participate in the activity, the students who did found it eye-opening.

“I pledged to speak up when something is unjust or wrong. Now that I have finished reading ‘The Hate You Give,’ I have sufficient insight on what is wrong in our society and how we must act upon it,” said Donya Khonsari, a junior.

Some people were wary about how affective the activity would be on the school.

“While I’m ecstatic about the idea, I’m not certain if it will live up to it’s potential as a result of the execution,” Chun said.

However, it’s been proven that it’s up to the students if they want to make a difference.

“So far I have stuck to my pledge, and I will continue to because I think it will impact the remainder of my life in ways that I haven’t figured out yet,” Khonsari said.

Even though some students have mixed feelings about the activity, the commission views it as a success.

“Usually, getting participation is difficult. Of course, we know that we will never get 100%,” Irwin said. “But for a school activity, it definitely got a good number of the student population to participate, and it was cool to see how many people pledged.”