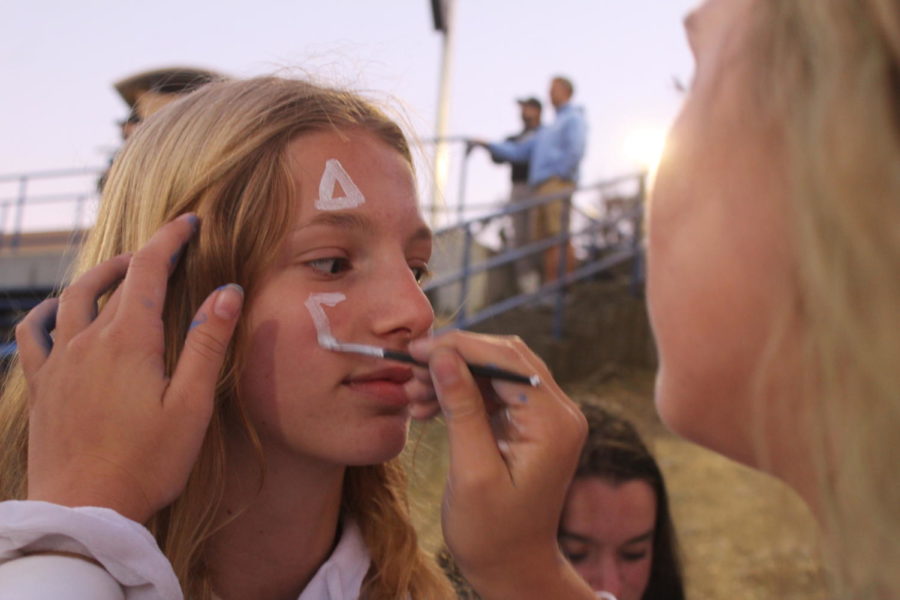 Lise Teyssier gets "Scots" painted across her face.

Behind the face of every Friday night football game is a dedicated team of students that work tirelessly to ensure that the game is enjoyable for all.

Friday night football games are notorious for the familiar smells of buttered popcorn, students painted in blue and white filling the bleachers, and cheers echoing from the crowd, but none of this would be possible without Carlmont’s ASB.

Once the game begins, ASB rallies the Screamin’ Scots section, a place for those who are passionate about cheering on Carlmont. Everyone remains on their feet and the cheers grow louder and louder as the game goes on.

“The fact that we can have a group of students so fired up, engaged, spirited, and painting their faces is amazing,” said Jim Kelly, the ASB adviser.

Many agree that the most student-oriented part of football games is Screamin’ Scots.

“The main struggle is getting people to show up. You can’t really have a student section if there are no students,” said  Jono Sison, sophomore class president.

After two quarters of cheering on Carlmont, it’s time for the halftime show.

In between dance team and cheer performances, ASB keeps the crowd engaged. Whether it’s dancing or playing mini-games with students in Screamin’ Scots, everyone remains enthusiastic for the second half.

Once the game ends and students file out of campus, members of ASB go back to Room A12.

“It’s pretty cool. You’ve got a whole bunch of students who want to hang out where your desk is and talk about how to make the atmosphere at football games even better,” Kelly said.

There are two distinct sides to a high school football game, one being the students attending, the other being those who make it possible. Many forget the amount of work that goes on behind the scenes to create a spirited and welcoming environment for all.

“Advertising and publicizing the event is the main problem that we have, once we get people to actually show up to the games, there’s more improvising,” Sison said.

ASB organizes other school events as well with some help from Carlmonts administration that sometimes takes weeks just to plan and organize.

ASB focuses on uniting the campus and increasing student interaction. Though the outcome is rewarding, they face challenges in making their ideas a reality. Not only do ASB students face issues in producing events for students, but they also struggle with general student approval.

“ASB has such a negative connotation among the student body just because so many people are so quick to judge, but ASB is the reason why football games have a giant cheering section, why we have a homecoming, why we have dances, and essentially if you took away ASB, there would be just school, and nothing else,” said Sasha Belov, a member of ASB.

Therefore, students are encouraged not only to enjoy school activities but to remember who makes them possible.