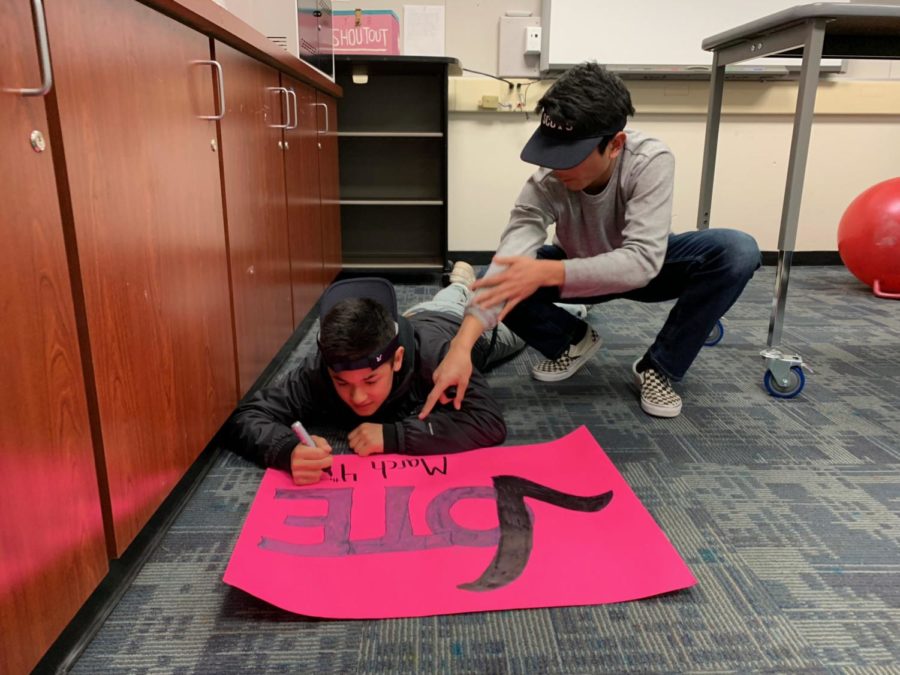 Students from all grades work on establishing their campaign weeks before voting day on March 4.

Many new candidates, as well as a lot of the current officers, are putting in their efforts to gain the position they seek.

During elections, the majority of Carlmont only sees posters filling locker halls and the campaign videos posted on the Carl Monty channel. However, what goes behind the scenes is quite an extensive process.

To start, the candidates are given an election packet that lists the requirements to run, the campaign rules, and the multiple campaigning methods.

There is no limit to the number of methods that the candidates are allowed to use. However, every candidate is required to record all the methods used onto a list.

“[The video] basically went over what I planned to do for my class and what I can bring to the table while trying not to bore them out of their minds,” Hsich said. “I also tried to reach out to my peers on a more personal level, so I went out and talked to other students about my campaign and elections in general.”

During the election, he was not working alone. Jono Sison, the current freshman class president and who is running unopposed for sophomore class president, was in a joint campaign with Hsich. They supported each other along the way, which eventually proved to be beneficial for both of them.

“We made a video together and promoted each other in the elections. I had a lot of fun campaigning with him. We both gave each other advice on how to get the attention of our peers and how we can show them that we are the best option for our class,” Hsich said.

Naya Salah, a current sophomore and who is running unopposed for junior class president, also decided to make a campaign video. But the process did not come as easy as she had originally hoped.

“One major issue I personally ran into while campaigning was gaining access to the gym. My [campaign partner] and I had to reserve the gym and email multiple people in order to secure the location for us,” Salah said.

Many candidates often use petitions as one of their methods. In this method, class officers must receive at least 85 signatures from classmates in their grade.

Furthermore, candidates often utilize posters and quarter sheets to plaster around the school in order to promote their campaign.

“I made posters and quarter sheets to put around the school. One of my methods was utilizing the walls by the gym. I knew for a fact that every freshman had a P.E. class, so it made sense to hang a poster where a lot of freshmen would see it,” Sison said, referring to last year’s election.

Timothy Krassiev and Jonathan Deridal, the current senior class vice presidents, took a creative path with campaigning and made pins to advertise their campaign.

“We made a campaigning video and hung up lots of flyers. On top of that, we made funny pins together using pictures of us from when we were much younger,” Krassiev said. “We believe that our pins and video really promoted for us the most and inspired more people to vote for us.”

Although the election packet provides many approaches to campaigning, they are all optional. Candidates are given the freedom to think of their own campaign idea. However, before the execution of any new idea, it must be approved by the class officer supervisor, Talia Fine.

The campaign is a huge part of elections, and there were a variety of responses for what drove students to run in the first place.

“I was inspired to run, because this year as freshman vice president, I’ve gotten a chance to see how amazing of an opportunity I have to help my peers get involved in school spirit and participate in class activities. I love providing my class a chance to have fun and get away from the stress that school normally brings,” Hsich said.

Sison ran for president in the sixth grade and has been involved with the student body government since.

“I was hesitant to run back then, but now I jump at any opportunity that presents itself,” Sison said.

Krassiev was recommended by his peers to run and took the challenge immediately.

“[My friend] told me that I should run for senior class vice president with Jonathan, and I agreed. Jonathan’s [excitement] made me excited as well. We took the opportunity right away,” Krassiev said.

The cruciality of class officers themselves can be questioned by students, for there is already the existence of ASB who carries out similar responsibilities.

According to Jim Kelly, the activities director, class officers are necessary because they bring more participants to events and serve as a conduit of ASB’s goals and efforts.

Although elections are valuable to him, he expresses concern in some of the incentives behind a student’s vote.

“A lot of people don’t even know what a class officer is supposed to do or is able to do. The vote becomes more based on popularity than on merit,” Kelly said.

In order to fix this dilemma, he believes that the student body must be educated.

“We would need [something] like an all-school assembly. Some schools do that. Some schools have a full on conventions where they have delegates nominate different people for office and those officers get to make speeches in front of the whole student body,” Kelly said. “The activities advisor then gets to explain to the student body what those positions are and what they do.”

Elections prove to be a stressful time for the candidates.

“I’ve run for officer twice in middle school, won as well as lost, and it never gets any less nerve-racking. Elections are super competitive, and the people running against you are extremely motivated as well, so running for an officer position is always a little frightening,” said Hsich.

Even though stress levels rise during this period, the campaign process is reported to be both a rewarding and learning experience for students.

“I’ve spoken to current class officers who gave me great advice on how to run. I learned so much through the advice given to me. I learned that being a class officer won’t be easy and will consume a lot of time and energy in which I’m ready to give,” Salah said.

The opportunity to become a candidate teaches students important life skills and more about the campaigning process.

“I’ve learned a lot about character throughout my campaign. It’s certainly not easy to run, and it takes a ton of courage and motivation to tell your class that you want to represent them. I’ve learned that even the smallest things you do can get you someone’s vote, so it’s important to try and reach out to as many people as you can,” Hsich said.

Kelly had some words of wisdom for those running in this year’s elections.

Kelly said, “For the new people, have a really good idea of what you’re getting yourself into and the commitment that you are making. Be super proud of that fact that you are taking on such a massive leadership risk.”