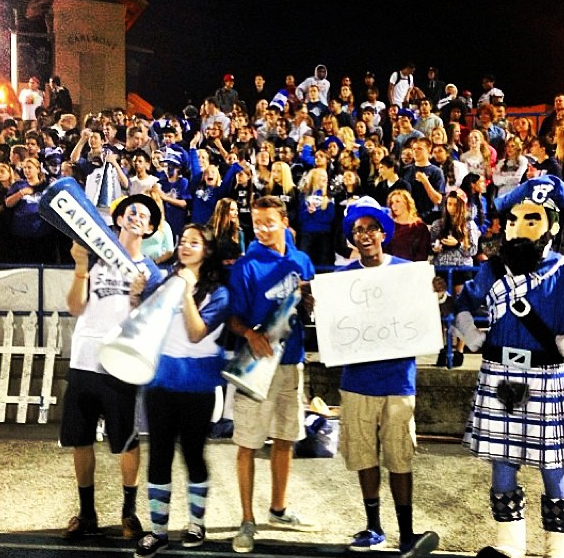 Screamin' Scots at a Football game

The members of Carlmont’s ASB formulated fresh ideas to kick off the new school year and promote Scot spirit.

As the 2013-2014 school year rolled around, it was time for the Associated Student Body to develop ideas for events and fundraisers that will benefit Carlmont. In years previous, Carlmont has held various fundraisers, however, there is a possibility a new one will take place this year.

Junior and a member of ASB’s dance committee, Jen Anthony, stated Carlmont plans to participate in the national Got Milk campaign.

The goal of the fundraiser is to “Promote milk in a competition…the school that purchases the most amount of milk in a certain timespan will receive a certain amount of money,” explained Anthony.

Not only does this fundraiser promote healthy habits, such as drinking milk, but could also benefit Carlmont financially.

Aside from fundraisers, one of the major changes ASB is conducting will help promote school spirit. The well-known cheering section of Carlmont sports games, the Screamin’ Scots, received many new members this year in addition to a speech given by the pit crew from the University of Oregon.

Due to the increase in participation, ASB hopes to get “the Screamin’ Scots a lot more involved,” stated ASB Vice President Claire Noemer.

According to Noemer, “[ASB President] Reggie [Chatman] is trying to get a lot more involvement in the games.”

While Carlmont’s football team is in the lowest division, the Screamin’ Scots hope to encourage players to be successful and give it their all during games.

As of now, ASB is most focused on raising school spirit and receiving a larger turn out to fall football games, but in the mean time, senior class President Tristan Gasperian had some future goals in mind.

Since the senior class has a large amount of money saved up, ASB plans to purchase  “more apparel for the student body like bro tanks and socks,” said Gasperian.