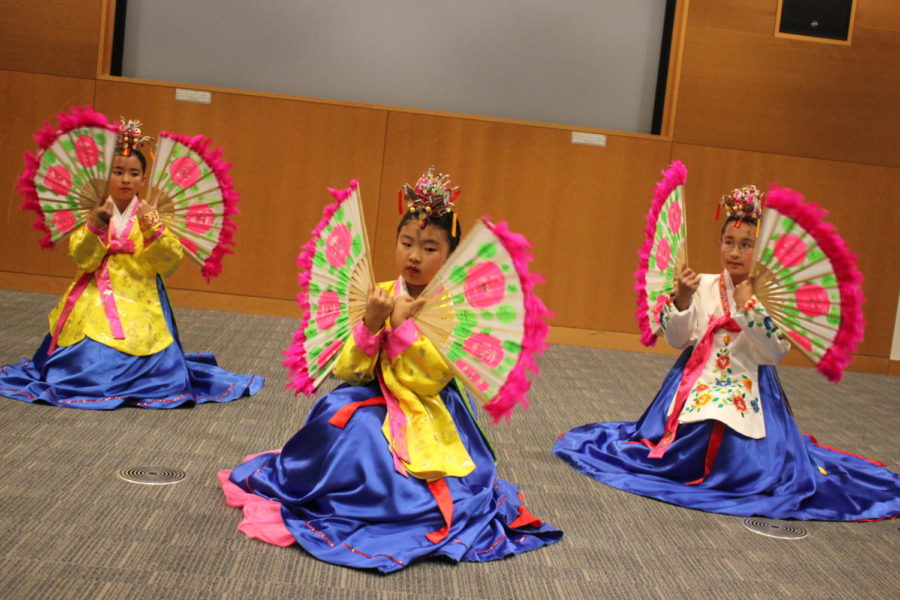 Dancing is a deep-rooted tradition for many cultures around the world. Learning about a culture’s dance can also be a way to learn about cultures that are not familiar to oneself.

The first dancers were Japanese dancers from the Kiyonomoto Ryu Classical Japanese Dance Group instructed by Katsunami Kiyonomoto. They boasted kimonos that were decorated with the famous painting The Great Wave by Hokusai.

After the first dance, Hawaiian hula dancers from San Mateo Buddhist Temple wearing leis and floral skirts came up to the stage, followed by an ensemble of singers and ukulele players. The group was led by Debbie Garcia, a hula dancer who is also studying to be a teacher.

“Hula to me is a life story. Not only am I learning about the dance but also the history and culture of Hawaii. It has also taught me respect for the land and people and helped me truly enjoy life,” Garcia said.

One of the songs performed was the Hukilau, performed by Garcia, which encouraged audience participation and singing along.

Another song was Moanalua, a song that on the surface speaks about a ship going from port to port but has a deeper meaning.

“Hawaiian songs all have a double hidden meaning. Moanalua is about a lady having different partners in different areas, but they make it sound like it’s a ship,” said John Shima, a musician for the group.

After the hula dancers, Indian Bharatanatyam dancers from the Kaivalya Foundation for Performing Arts were set to perform. According to Ashwini Raj, the instructor of the group, the dance is easily recognizable with intricate footwork and eye and hand gestures.

“Dancing gives me satisfaction and spiritually elevates my senses. For me, dancing is more of a spiritual enlightening than a dance form,” Raj said.

Dangling gold jewelry adorned the dancers’ heads and clothing, which helped create a rhythm. Many songs featured instruments like cymbals that added expression to the swift movements of the performers.

After the Bharatanatyam dancers were finished, the final group that came onstage was the Il Hyun Kim Korean Dance Academy. The dancers were also mainly children.

The dancers held multicolored feathered fans and also played instruments like drums and the bak, a traditional Korean instrument, to add live music to the songs.

The dance mainly consisted of twirls, which showed off the many layers of the hanboks. Hanboks are traditional Korean dresses worn during semi-formal or formal attire as well as celebrations such as New Years. They are distinct in their bright colors and seamless skirts.

Dancing all around the world has cultural significance, and different aspects of dance help teach traditions to the next generation. The library organized the event to highlight the impact the dances have on the cultures they are from as well as to share it with San Mateo residents.

“It’s nice that we can show different cultures and different styles of dance right here in our library,” said Mary Kwan, one of the organizers of the event.