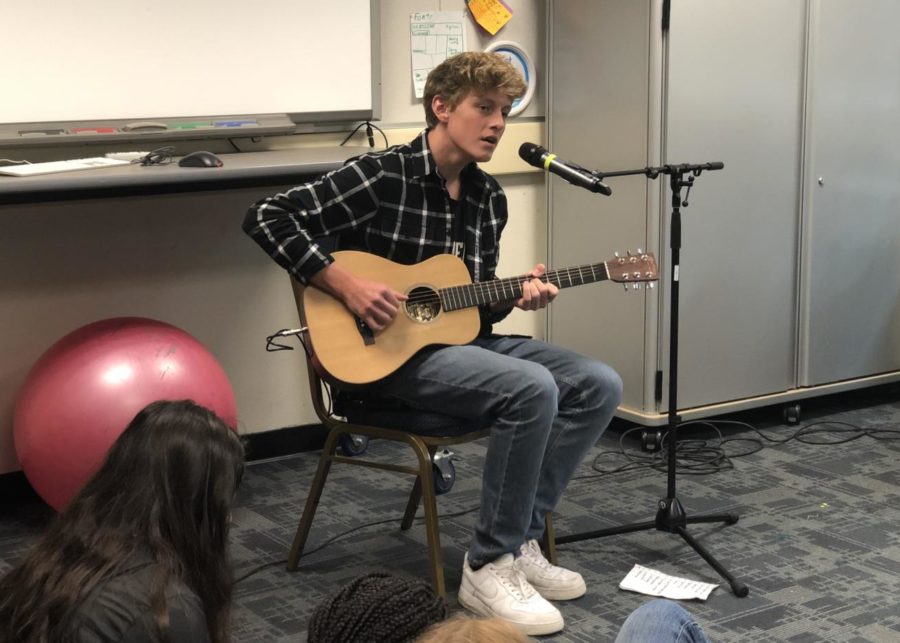 Keegan Dyer, a sophomore, sang while strumming his guitar in the ASB room as students sat around to watch.

On the outside, Keegan Dyer seems like an ordinary high school student, but he is much more than what meets the eye.

Throughout his adolescence, Keegan Dyer has moved from the musical confines of his bedroom to talent shows and open mics in the Bay Area.

According to Josh Graves, a sophomore, Keegan Dyer occasionally performs outside of the Redwood City Cinemark Theater, hoping to earn a couple of bucks.

In early April, Jim Kelly, ASB Advisor, started to allow him to perform in the ASB room, where he draws in a small crowd.

“I personally really enjoyed Keegan’s performance because he is a good guitar player and an even better singer,” Graves said.

Jono Sison, a freshman, also has enjoyed the small music sessions during lunch.

“The way Keegan had all the confidence in the world to get up in front of many people and perform the way he did is terrific. My favorite part of his performance was when he whipped out his guitar and started playing ‘Best Part’ by Daniel Caesar, which is one of my personal favorite songs,” Sison said.

Kyle Dimick, a senior as well as one of the audience members, also has an interest in music and is a member of the Music Production Club at Carlmont.

“I took time out of my day to listen to Keegan because I think that every artist needs to be supported in some way. Especially when you’re just a new artist, and you’re doing your thing in front of people who might be judging you, I think it’s very important to have people supporting you,” Dimick said.

Keegan Dyer has greatly benefitted from performing in front of others.

“I have been performing for an audience from a young age, but every time I perform in front of others, it gives me an experience that I can use and apply in the future,” Keegan Dyer said.

As for anyone with a dream, one must start from somewhere.

At the age of 3, Keegan Dyer had already shown a keen interest in music. His father, Forrest Dyer, taught him the ukulele at a young age. He then gradually moved on to the guitar and currently attends lessons at the Riekes Center.

“Keegan has always been interested in music. He first sang along to Maroon 5’s song, ‘She Will Be Loved,’ at the age of 3,” Forrest Dyer said. “He willingly wanted to learn songs and perform. He was eager to go to live shows from the age of 7.”

At the moment, Keegan Dyer does not produce his own music, but he aspires to create a label in the future. Although the music industry is competitive, his father stays hopeful for him and continues to support him in any way he can.

“I’ve always encouraged Keegan to follow his heart, dreams and to be true to himself. Although being a stage musician is his dream, I’ve told Keegan that having an education that could branch out in the industry ‘behind the scenes’ could still keep him involved in music if he ‘didn’t make it,’” Forrest Dyer said.

Despite Keegan Dyer’s progress, he still believes that he has much to improve on to better himself as a musician.

“I need to improve my voice and skills. There’s always room for improvement. I also want to learn other instruments like piano,” Keegan Dyer said.

Keegan Dyer was lucky to grow up in an encouraging environment to truly pursue his passion at the fullest of his ability. His father is his biggest supporter, and he makes a huge effort to show this.

“I’ve always tried to make our home a music-friendly place, whether it was me freely playing guitar or ukulele and singing with music playing in the background. I think this allowed Keegan to feel safe and supported in expressing himself musically,” Forrest Dryer said.

As of now, Keegan Dyer will continue to chase his dreams and inspire others to do the same.

“Music is a universal language that bridges all people from all walks of life from all over the world,” Forrest Dryer said. “I feel so blessed and so proud that Keegan found his love for music at such a young age.”