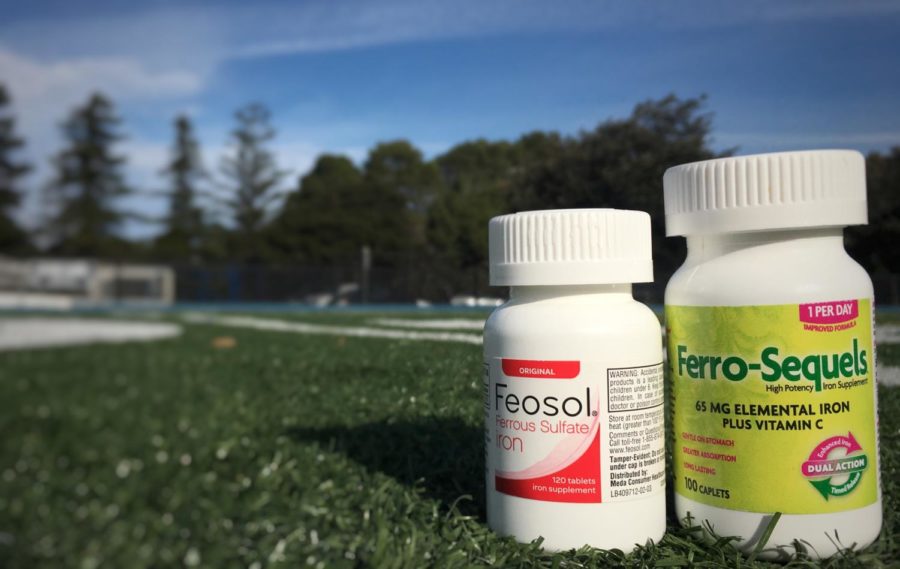 The iron supplements Allie Ayers takes in order to keep her levels of iron stable are positioned on the soccer field at Carlmont High School, where Ayers realized something was keeping her running from improving. She eventually learned that she was severely anemic.

Passion. A word defined by the dictionary as a strong emotion that’s barely controllable. Yet, to every individual, it has a different meaning.

For Allie Ayers, passion, that satisfaction of doing what you love, revolves around running.

Ayers discovered this passion in seventh grade, the year she joined her middle school’s cross country team. Once she started running, there was no stopping her.

Or so she thought.

“I would say that I love running because of how I get to push myself and how it relieves stress for me. Plus, it allows me to enjoy nature and spend more time with my dad and friends. I enjoy the sense of accomplishment it gives me,” Ayers said.

Ayers is now a sophomore at Carlmont High School and is a part of Carlmont’s cross country and track and field team. She runs a 5:27 mile, and this year, she led her varsity cross country team to the CIF State Championships with the help of newcomer Sophomore Kaimei Gescuk.

Being where she is now, it’s hard to imagine Ayers as any less than a top runner. However, her high school career didn’t start off as she had hoped.

Near the beginning of her freshman season, Ayers felt she was improving, and she was – at least for a little while. The thing is, compared to her middle school practices, high school training was much more intensive, and as the season progressed, her times no longer reflected her effort.

“I was training with Elena Moore [a sophomore and varsity runner at Carlmont], doing the same workouts every single day, but she kept improving, and I kept getting worse. Then, I couldn’t breathe during workouts, and I just couldn’t keep up with everyone else,” Ayers said.

At first, Ayers’ parents, Lisa Streeter and Shawn Ayers, figured that it was just due to the transition from middle school to high school. They thought she may have had asthma or was just tired from the extra workload.

“We first noticed that Allie’s race times were getting slower, instead of faster. According to her dad, who is also a runner, she should have been getting stronger, not weaker, as the season progressed. She also looked pale and thinner. As hard as she was trying, she just could not run any faster,” Streeter said.

They then took her to Quest Diagnostics for a blood test and described the symptoms to the physician.

“The doctor contacted me immediately after getting the results and told us to start her on a high dosage of iron supplements and to restrict her physical activity,” Streeter said.

They told her she couldn’t run for at least the remainder of the season, if not longer.

They told her that her passion was hurting her.

According to the Mayo Clinic, anemia is a condition that results from dysfunctional red blood cells or lack thereof. In Ayers’ case, she was iron deficient, meaning it was harder for her body to deliver oxygen to her muscles, which is required for any physical activity.

This meant no more physical education and no more running for Ayers.

Although it was hard, Ayers knew letting herself recover was the most important thing.

“Honestly, [being diagnosed] was a relief because I loved running, but I had started to hate it because of how hard it had become,” Ayers said.

Despite her forward thinking, it was no secret that her teammates missed her.

Mylène Vachon, a Carlmont sophomore runner, said, “Allie’s absence in the team at the end of last year brought everyone’s spirits down a bit since she was such a strong teammate. Individually, I hated it because I loved having her at practice.”

As much as they supported Ayers’ recovery, they knew taking a break must have been hard.

“I can’t say I am as passionate about anything like Allie is about running, but even though I wanted her to take a break for her health, I could tell that she really wanted to start running again,” said Sarah Jolls, also a sophomore runner for Carlmont. “[Her experience] definitely opened my eyes [and made me realize] that [anemia] is real and affects a lot of people.”

Liz Jolls, the mother of Sarah Jolls, was diagnosed with slight anemia in high school. Like Ayers, Liz Jolls was a bit relieved when she was diagnosed because before, she thought she was just not doing enough to succeed. In order to recover, she took lots of iron pills and ate liver once a week due to limited treatment options.

Similarly to Liz Jolls, Ayers was required to take iron supplements daily during her time off.

According to Wendy Sterling, a nutritionist from Sterling Nutrition, athletes and vegetarians require twice the recommended daily allowance of iron, which is usually 16.3 milligrams per day for teenagers.

Before Ayers was diagnosed with anemia, not a lot of people, particularly on the Carlmont cross country team, had ever heard of the disease. However, according to the World Health Organization, over 30 percent of the world’s population is anemic, mostly due to iron deficiency.
?
The National Institutes of Health revealed that iron deficiency anemia (IDA) is much more common in females than males, mostly due to subsequent menstrual blood loss.

Infants and young children are especially at risk of IDA, as they require a lot of iron to grow and develop. Without this supply, children are more prone to develop anemia, leaving a lasting negative impact on their lives.

Similar to athletes and vegetarians, pregnant women need to double their iron intake in order for their fetus to develop. In fact, about 42 percent of pregnant women end up with IDA which can, in some cases, result in premature births or low-birth-weight babies.

Although it seems athletes would be predisposed to anemia, that is not the case. The general population is just as much at risk; however, symptoms tend to show up sooner in athletes due to increased physical exertion and demand for iron to transport oxygen to the body.

According to Runners World, the only reason athletes seem to be more anemic is because a mild case of anemia would most likely be ignored in the general population, as the person would most likely show little to no symptoms; since non-athletes almost always keep demand for oxygen at a minimum, the effects are minimal.

Nonetheless, a few symptoms to watch out for are dizziness, fatigue, lightheadedness, discomfort, fast heart rate, or shortness of breath due to the lack of oxygen being delivered.

Usually, an iron or dietary supplement and vitamins can be used to specifically treat IDA. But, in some cases, even a blood transfusion is required, according to Mayo Clinic.

“Red meat, beans, cereals, and bars contain iron, but the plant-based sources require a vitamin C helper for absorption. Chocolate is also high in iron; some bars even have 80 percent [of the recommended daily allowance]. Other foods such as shellfish, like oysters and clams, are also high in iron,” Sterling said.

Aside from iron-rich foods, Hana Grobel, M.D.,  a physician at the Palo Alto Medical Foundation, recommends cutting back on dairy, as it decreases absorption of iron, whereas Vitamin C helps absorption.

However, it is important to note that change in diet alone will not influence one’s iron levels enough to make a difference, they must be paired with supplements as well.

Although anemia is treatable, it can eventually lead to infertility or deterioration of bone mass if not treated. Having too little oxygen in the body can also damage one’s organs, especially the heart because it must pump more blood to compensate for the lack of oxygen. In addition, one may develop restless leg syndrome, the strong urge to move the legs that can prevent people from sleeping soundly.

The symptoms of IDA make sense once diagnosed, but separate, they may seem like the after effects of sleep deprivation or even dehydration. This causes a lot of people to not think much of fatigue or shortness of breath.

The problem with this is that if the symptoms are disregarded, the anemia could develop and eventually lead to irregular heartbeats, heart failure, and, in some cases, death.

In Ayers’ case, iron supplements and diet specifications caused her levels to improve month after month. By the time track season came around, Ayers was prepared to give it another go, though she limited her races to one event per meet.

After track, Ayers felt she could run to her full potential again; however, she still must go to get blood tests regularly.

Leading her team to finals this year further solidified the fact that running was what Ayers was meant to do. She’ll always live with anemia, but she won’t let that stop her from doing what she loves or from pursuing her passion.