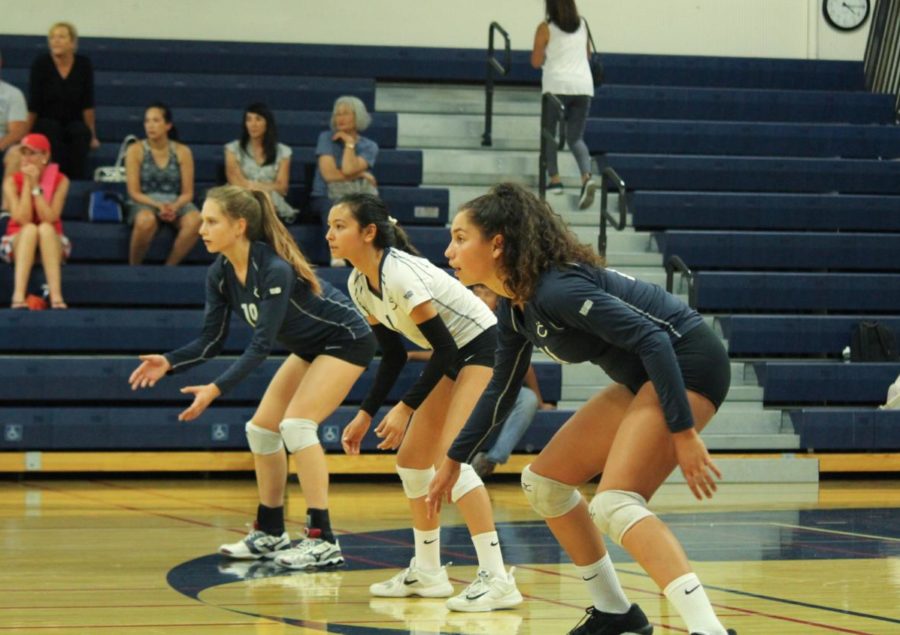 After losing a few points in a row, Nadia Fedotova, Keani Haake, and Chianti Raddavero focus on the next point.

The idea of being mentally tough while playing any sport is inherent throughout sports culture.

In reality, an average high school athlete is constantly juggling practice, games, academics, conditioning, and their social lives. They are under pressure to perform and are often upheld by injuries. However, they are expected to push through and come out on top.

Isabella Chu, a junior, is on the varsity volleyball team, varsity badminton team, and also plays club volleyball. She has volleyball practice almost every day, along with two games a week. On the weekends, her team attends local tournaments. On top of that, she is taking many advanced classes and is preparing to take the SAT. Her plate is almost always full, but she still manages to find time for her friends and family.

Chu said, “To be honest, I don’t [manage my time]. It is hard for me to believe that anyone can. It is extremely difficult, but realistically setting priorities is your best bet. Like during the season, my priorities are family, school, and then volleyball.”

However, when Chu is on the court, she has her head in the game. How an athlete mentally prepares for a match is equally important as the physical preparation. Some listen to music, while others talk with their team to ensure that they are on the same page.

Once an athlete is playing in a game, it is also essential that they carry a growth mindset and a positive attitude toward their teammates.

Micheal Lapuz, the girls varsity volleyball coach, said, “They [players] have to be more focused on body language. Don’t show when you get angry at somebody. You want to be more encouraging than you are upset because sometimes it may take effect for some of the teammates.”

Lapuz emphasizes the importance of an encouraging environment. He believes that attitude towards other players can make or break the whole team’s energy during a game. Additionally, frequently congratulating and cheering on each other is a huge confidence booster for the team, especially when they’re losing.

Maya Lee, a sophomore on the JV water polo team, said, “When we are losing, I think that we should be moving the ball around some more, and our positioning can be a little better. Our countering could be faster.”

Lee focuses on what is needed to improve the team’s play while other players shout words of encouragement from the sidelines. This combination ultimately sets up the common goal to win among the group.

Chu also suggests focusing on each point at a time and to move on from mistakes.

Chu said that she was once told by a former coach, “There is a total of 50 points in a volleyball game. Every set has 25 points. Every play is worth two points. One is on the scoreboard; the other is merely in your head.”

The faster an athlete can put their mistakes behind them and bring a positive attitude, the better their performance will more likely be.

Lapuz said, “You want to put yourself in a good mental state. You don’t always have to be physically moving and having to take control of everything. If you have that same mental focus, you will do well regardless.”