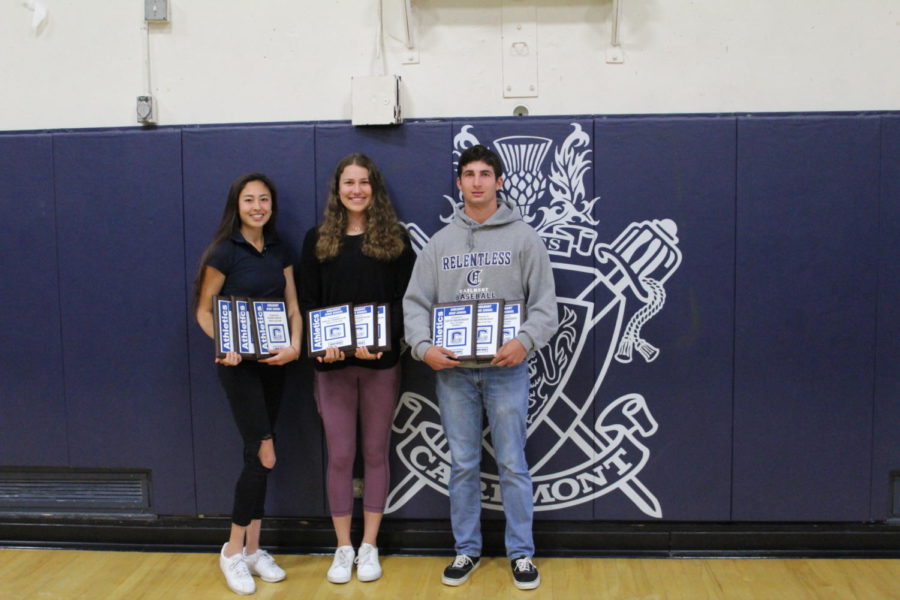 Kaimei Gescuk, Ashley Trierweiler, and David Bedrosian take a picture while holding their Athlete of the Year plaques.

The first-ever athletic awards ceremony in Carlmont history was held in the Stogner Gym on Wednesday, May 29.

As the seats began to fill, Carlmont student-athletes, coaches, administrators, and staff members gathered to recognize another year of outstanding accomplishments for the Scots. The sports leadership class organized the event, with water polo player Hunter Hawkes and volleyball player Tierra Testa serving as the co-hosts. Carlmont’s Athletics Director and sports leadership teacher, Patrick Smith, made sure the event was something that the inductees would not forget for a long time.

“It is a massive moment for many people; not everyone gets the honor of having their name on the Hall of Fame banner. To have your name next to the all-time greats of Carlmont in your sport is extraordinary, and I hope these athletes know that,” Smith said.

Carlmont only inducted 26 athletes out of 1,100 athletes into the Hall of Fame. Many set records and set a standard of greatness for the next season. The ceremony was an emotional one, as cheers and tears began to rain down as the young athletes were etched into Carlmont sports history.

“I didn’t expect that I would be so happy and sad today,” said Ralphie Holmes, a senior who was inducted into the Hall of Fame for boys lacrosse. “It’s amazing that I can represent my team and be on this banner, but it also means that my lacrosse years are done. It’s a mixed feeling, I guess.”

While all Hall of Fame athletes attained a mighty feat, a few showcased their versatility and dominance in multiple sports. These gifted competitors aim for the most prestigious award in Carlmont sports: The Athlete of The Year. This year, there were three winners, two girls and one boy. Ashley Trierweiler and Kaimei Gescuk took home the honor for the girls, while David Bedrosian represented the boys. Treiweiler was recognized for the second year in a row as the Female Athlete of the Year, a feat few have accomplished at Carlmont.

“I did not expect that I would be chosen for Athlete of the Year two times in a row because it rarely ever happens. However, I have worked hard and stayed dedicated to my game to get me into this position, so I am pleased,” Trierweiler said.

After the Athlete of the Year was announced and the shouts of celebration had died down, the students made their way to the table for their celebratory cupcakes.

“It’s just a really happy moment for all of us,” Gescuk said. “It’s unbelievable; it is an honor to represent the girls as Athlete of the Year. I won’t forget this for a long time.”

Many took time to praise the sports leadership class for their efforts to make the event a success. Sophomore Hall of Fame swimmer Morgan Hawes was one such person.

“I want to thank the sports leadership for doing this event because we didn’t have anything like this last year. I did not know I even was in the Hall of Fame my freshman year for swimming until my friend showed me on the banner. So I’m grateful there is an event that celebrates and acknowledges our achievements,” Hawes said.

As the ceremony began to wind down and athletes left for the exits, some took time to look up at the banners that will soon have their names on it. Gescuk, now holding three plaques honoring her Hall of Fame entry in girls track and cross country as well as her Athlete of the Year, was one of those people.

“I would not have expected to come into my junior year and walk away with two Hall of Fame [awards] and Athlete of the Year to my name. It’s crazy, really, and I don’t think it has quite set in yet,” Gescuk said. “It is an honor and privilege.”

Below is a complete list of all the 2019 Hall of Fame Award Winners.