Athletic trainer gives the inside scoop on injury prevention 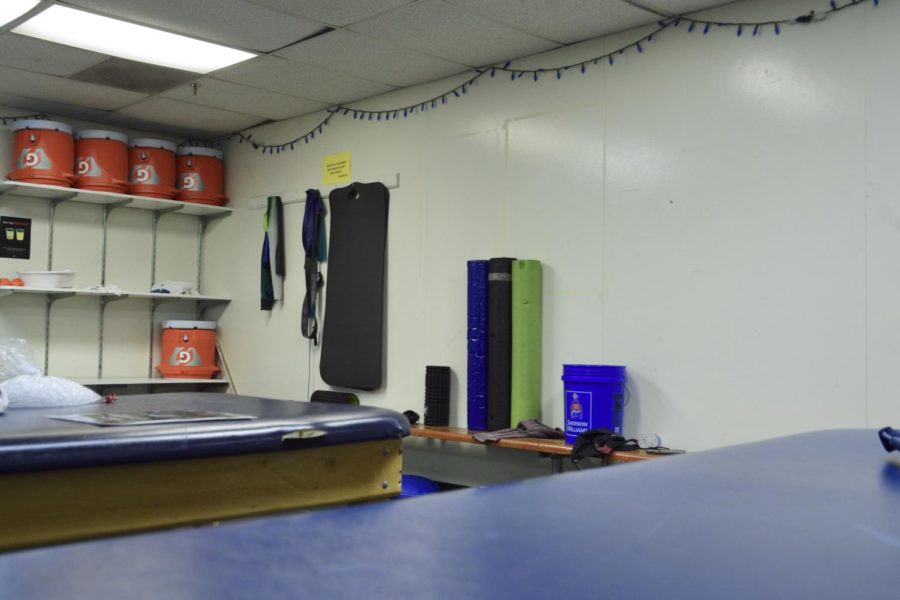 The athletic trainer's room is located under the gym facing the football field. Many athletes go here for assistance.

Sports injuries are common among athletes and can have long-term effects, but many of these injuries are preventable.

Chidester believes that many injuries are preventable and that an athlete must take care of their bodies before an injury occurs.

According to Chidester, the leading cause of injuries comes from improper warm-ups. Having a solid dynamic warm-up and stretching before intense exercise is especially important for an athlete. Chidester recommends doing warm-ups that incorporate motions that are specific to the sport the athlete is playing. For instance, light jogs, karaoke, and side shuffles are all good exercises to prep the athlete’s muscles for more rigorous activity.

Chidester said, “One thing that I see is people who haven’t adequately warmed up when weightlifting. They aren’t getting lower weights and aren’t getting themselves into the correct position. Or when running, they go off and sprint immediately without loosening up their muscles.”

Chidester also mentions that a strength and conditioning coach can help athletes strengthen the muscles around their joints. This process helps the athlete’s body get used to new motions.

According to Chidester, sleep is significant to a player’s performance. Because of this, a student-athlete should be getting around eight hours of sleep a night.

Additionally, one must back up a good night’s rest with healthy lifestyle habits. For example, athletes must stay hydrated and frequently replenish their bodies with water as they exercise.

Other lifestyle habits that Chidester emphasizes are eating healthy and eating the right foods at the right time. A balanced diet is crucial to an athlete’s performance. He recommends that athletes eat a three to one carbohydrate to protein ratio after exercising.

Chidester said, “A lot of people think they need to load on proteins, but you need to replenish your carbohydrates as well and then take an adequate rest period before exercising.”

Taking a break from a sport, especially during the off-season, is beneficial as well. It provides an opportunity for the body to rest from the exercises or sports.

However, this doesn’t mean that the athlete should stop exercising altogether. Instead, Chidester recommends playing another sport, running, or even doing another type of exercise purely for fun. This way, the muscles used for playing the primary sport aren’t always getting worked and will have an opportunity to rest.

Curly Raddavero, a freshman, plays both JV volleyball at Carlmont and club soccer.

Raddavero said, “Running in soccer helps me move faster in volleyball. It also helps me read the ball better when passing.”

Chidester’s training room is located under the gym facing the football field. He is available Monday through Fridays from 2:45 p.m. to 7 p.m.