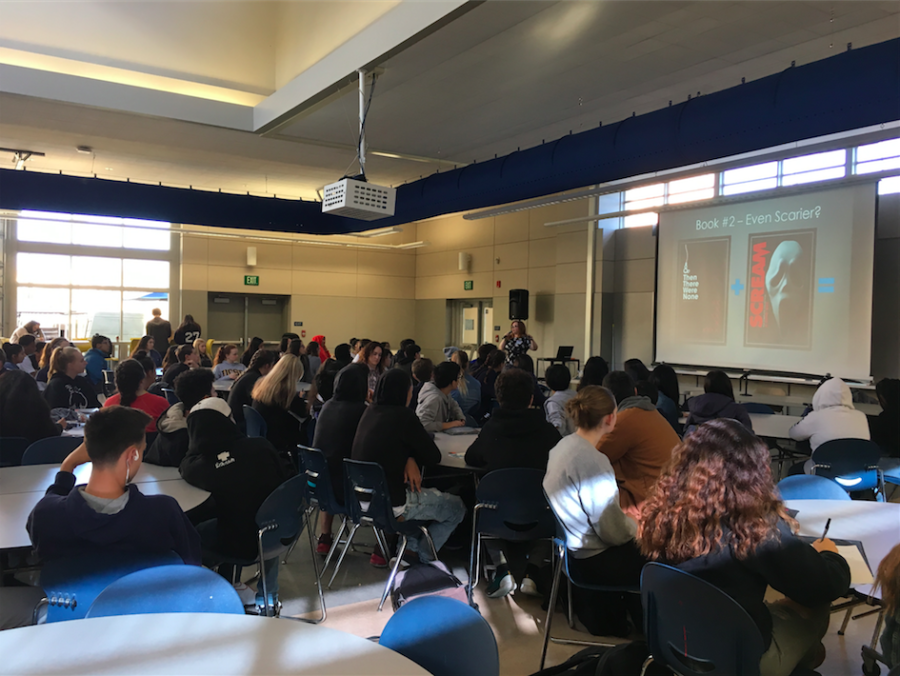 Gretchen McNeil tells students about one of her books.

McNeil, as well as Meredith Russo and Tamara Ireland Stone, were invited to Carlmont by the San Mateo County Libraries as part of their Young Adult Novelist Convention.

In the Student Union, McNeil gave a presentation to students in which she dived into her career path, her eight published books, her backstory, and tips she has learned along the way.

Before McNeil became an author, she was a trained opera singer and a voice-over artist.  The first novel she wrote was an adult romance novel which was never published.  When she tried to hire an agent, the two that responded to her said that her writing style is more suited for young adults.

McNeil began writing Young Adult novels and her first published book was “Possess,” a book in the horror genre about a teenager who has the ability to banish demons to the underworld.

Her second published book, “Ten,” was her best-selling book and was made into a television movie.  The story focuses on a group of 10 teenagers secluded on an island for the weekend.  The teenagers are killed one-by-one over a course of three days in this murder-comedy.  The book was made into a television movie by the company Lifetime, with a name change to “Ten: Murder Island.”

McNeil, having grown up in the Bay Area, likes to add diversity in her books to make an impact on readers.

“All my books feature very diverse casts and characters like the audience [at Carlmont] right now. I grew up in a very diverse place so I like to incorporate that into all my books,” McNeil said.

McNeil also mentioned that she does not read reviews of her books, which was surprising to some students.

McNeil spent the end of the assembly answering any questions the students might have had. According to Kayla Figard, the teen services librarian at the Belmont Library, the event ran smoothly.

“The students were so excited and inspired by Gretchen, Meredith, and Tamara. It was wonderful to hear them ask questions on subjects, from writer’s block to coming out to silly questions, that made the authors seem like real people,” Figard said.

The presentation was well received by many students, with some wanting more similar visits so that authors could share their techniques on being successful.

“They should have more [author visits], but not make them mandatory so that the people that actually want to go will not be bothered by the kids messing around during them,” Ayan Dixit, a sophomore, said.