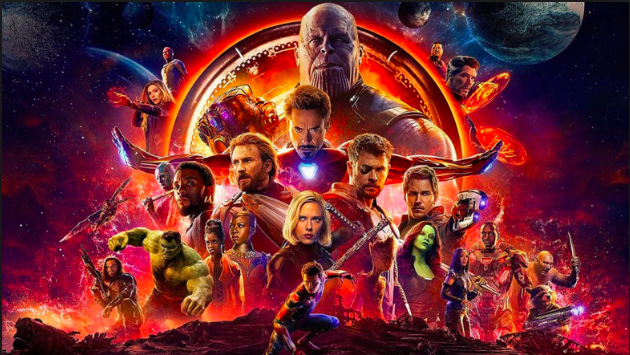 'Avengers: Infinity War is the 19th Marvel movie made since 2008, which was the beginning of the Marvel Cinematic Universe(MCU). The movie was released on Apr. 27, 2018

Since its release on Apr. 27, ‘Avengers: Infinity War’ has made $1.2 billion worldwide making it the fastest movie to ever reach $1 billion, according to BoxOfficeMojo.

Ever since the initial announcement of ‘Avengers: Infinity War’ at the San Diego Comic Con in 2016, fans have anticipated one of the best products Marvel has ever released. They were not dissapointed.

‘Avengers: Infinity War’ is the culmination of 18 Marvel movies over the past decade that all began in 2008 with the release of ‘Iron Man’ — the movie that started the Marvel Cinematic Universe (MCU).  ‘Avengers: Infinity War’ contains a cast of 22 superheroes, all of which have appeared over the last decade with their own stories and personalities.

The movie begins with many of the characters divided after the plot of ‘Captain America: Civil War’ which ended with many of the heroes in different places, not on speaking terms with one another. A group of heroes start out in New York, some start in Europe, and some start in outer space, but by the time the movie ends, most of them end up in Wakanda, an African country introduced in ‘Black Panther.’

One of the only negatives about this movie is how the location is always changing. It’s difficult to tell a story with 22 different superheroes while keeping the movie at a reasonable length, but I found myself confused multiple times throughout the movie. For example, the location would change from outer space to Wakanda, and the audience wouldn’t see another scene from outer space for about a half an hour, making the movie hard to keep up with.

Even Iron Man (Robert Downey Jr.), the leader of the Avengers and the man who started the MCU, doesn’t receive extra screen time, but in the scenes he does appear in, he gives some of the best lines and moments of the whole movie.

Together these heroes fight the main villain, Thanos, a titan whose main goal is to find the six infinity stones scattered around the galaxy and wipe out half the universe when he does. The Avengers are called upon to repulse Thanos after he sends his army to Earth to kill the Avengers and take the infinity stones.

Along Thanos’s adventure of finding the infinity stones, he is faced with difficult tasks that require him to make tough decisions. For example, to obtain the Soul Stone, Thanos must sacrifice a loved one, which he does this when he throws his daughter Gamora (Zoe Saldana) of a cliff.

The scene of Gamora’s death is one of the best scenes throughout the movie because it left the audience speechless and it shows that Thanos would go through drastic measures to collect all six infinity stones.

Thanos is hands down my favorite character in the whole movie. The MCU has been highly critiqued over the past decade of having bland villains with unrealistic goals and usually don’t put up a great challenge. Thanos, however, isn’t like this.

Thanos has some of the most epic parts of the movie that keep the audience on the edge of their seats, such as when he uses the infinity stones to throw a moon on the Avengers while fighting on his home planet. His goals of wiping out the universe and making all aspects of life perfectly balanced are very understandable after listening to what he has been through. Finally, he is the toughest challenge that the Avengers have faced, as shown by how he was able to kill many members while remaining unharmed.

After Thanos finds five of the six stones, he goes to Wakanda to find the last one, which is embedded in the head of Vision (Paul Bettany) who is staying in Wakanda trying to get the stone removed from his body by Shuri (Letitia Wright). Thankfully, heroes including Captain America (Chris Evans), Thor (Chris Hemsworth), and many more are there to greet Thanos, but Thanos is eventually able to defeat the heroes, pull the last infinity stone out of Visions head, and with the snap of his fingers is able to kill half of humanity including fan favorites like Spider-Man (Tom Holland) and Black Panther (Chadwick Boseman).

I believed that this was an appropriate ending for the movie because throughout the decade of Marvel movies, there hasn’t been instances where the heroes die, so having this happen in the ending lets the audience know just how desperate the situation has become. It also is the perfect cliffhanger for the fourth Avengers movie, which will build off of ‘Avengers: Infinity War’ and is scheduled to release May, 2019.

‘Avengers: Infinity War’ was successfully able to keep me intrigued for three hours with its intense battles, breathtaking scenes, and humor. It’s one of the best Marvel movies ever made, and it filled me with both sadness and anticipation for ‘Avengers 4.’