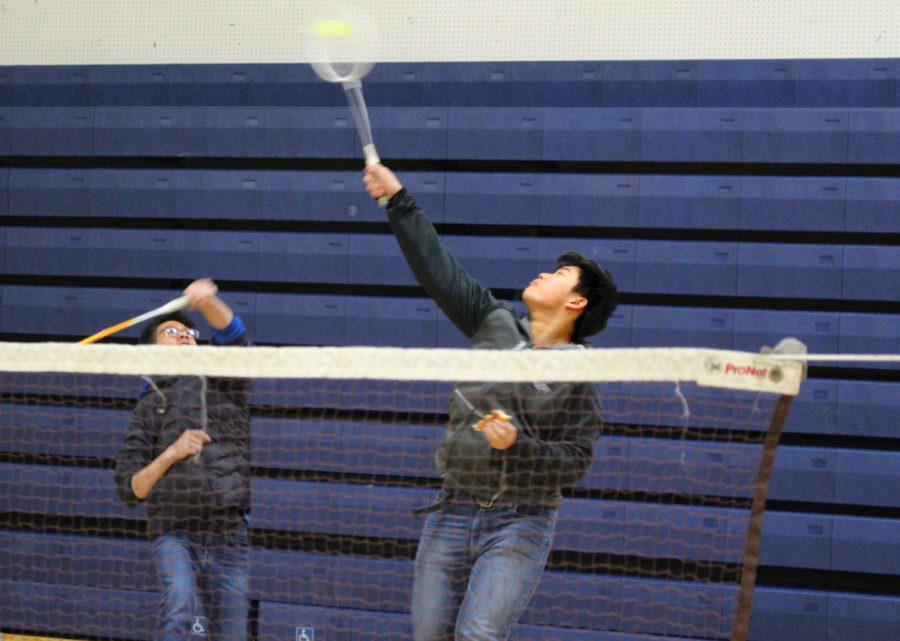 Kenny Lee and Adrian Tongthaworn play a match against their friends.

With tryouts beginning early next semester, Badminton Club welcomes those that want to improve their skills before the season starts.

Badminton tryouts at Carlmont are very competitive due to the vast amount of people looking to be on the team. Being a very technical sport, maintaining a strong set of skills and mastering the basic strategy is essential to earning a spot on the limited roster.

“If people actually want to improve, they definitely have opportunities to in our club,” said Alexander Kwan, the president.

Badminton Club is run by three seniors — Kwan, Nathen Chen, and Kyle Nip — who have all played for Carlmont’s team since their freshman year. By opening up the doors to the Stogner Gym each week, the trio is able to share their passion for badminton with others.

“I feel like as a sport, badminton is kind of underrated, and nobody really cares about it. But making this club has made me feel like we are bringing attention to it, and people can realize that it is really fun and will want to join the team,” Kwan said.

Chen, one of the vice presidents, personally trains members who are aiming to make it on the team this year. He said that he has noticed much improvement in those people over the past two months that the club has been meeting.

“I think the club has been a big help in improving my skills. [Chen] is a great teacher and he’s very patient. I’ve definitely improved, but I would not say that I’m good yet,” said Ayden Smith, a senior.

No prior experience is needed to join the club. Smith had only played badminton during his freshman physical education class before attending.

“It’s a good avenue for people who want to get a feel for badminton [before tryouts],” Smith said.

Looking forward, the executive team is aiming to start a tournament next semester in preparation for the spring sports season.

“We’re planning some organized games so people can feel more challenged, and hopefully talk to more people instead of just their friends,” Kwan said.

Andy Luu, a sophomore, joined this club initially to gain more experience for tryouts and believes these tournaments will be very helpful.

The members of Badminton Club are excited to foster their passion for the sport during the off-season.

“The club forces you to make a commitment to playing and getting more serious about the sport,” Luu said.