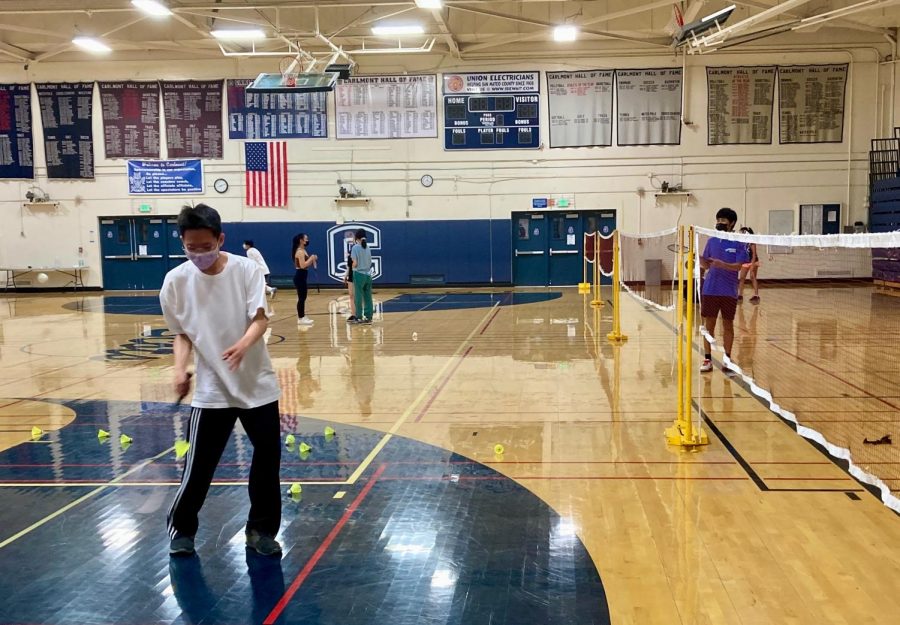 Joshua Ting, a junior, serves the birdie in a practice match at a Carlmont open gym.

After over a year immersed in pandemic uncertainty, Carlmont’s badminton athletes are hopeful for a smooth transition into the upcoming season.

The badminton open gyms are designed to support this transition and offer a rare opportunity for athletes to socialize and freshen up their skills before the beginning of tryouts in January.

Open gyms are typically held every Friday at 6 p.m. in the main gym unless the supervisor provides further notice. However, the times are occasionally inconsistent due to conflicts in schedule with the ongoing volleyball season.

“It’s a really valuable amount of time that we have to practice since we don’t have our season for a while,” said Sanjna Sood, a junior at Carlmont. “We’re able to get a lot of gym time which is super important because it makes up for the practice we didn’t get because of COVID.”

The previous season was heavily affected by the pandemic. The Peninsula Athletic League (PAL) was held very differently.

“We actually did have the PAL [during] last season, but it was not scored or structured in the fashion that it normally is when the higher regionals such as [Central Coast Section] (CCS) are in place,” said Shervin Mobasher, the head coach of varsity badminton.

Last season, the only tournaments held were unranked. PAL also organized matches with COVID-19 protocols integrated. This meant games were based on location rather than point standing

Athletes also faced strict COVID-19 regulations, disrupting the flow of practices and matches. According to Amisha Nambiar, a senior, players weren’t allowed to touch their opponent’s equipment during games.

“You could only touch your birdie, and if it landed on [the other person’s] side of the court, they weren’t allowed to pick it up, they just have to use their racket to slide it across you,” Nambiar said.

Even though COVID-19 took away opportunities to play the sport, especially with the spring season of 2020 canceled, many athletes also appreciated the close bonds formed among team members during the pandemic.

A Carlmont senior, Max Srivastava, a contender for team captain in the spring, hopes to maintain these bonds through safely held badminton open gyms.

“It definitely keeps the team dynamic, and it keeps friendships going and people social. It’s also important for keeping the team’s skill level up, and people get to be active after a long day of doing nothing,” Srivastava said.

The situation has improved since last year, but the pandemic remains a serious concern. According to Srivastava, regulations at local clubs like Bintang aren’t imposed strictly.

“I think [Bintang wants] you to be vaccinated and wear a mask while not playing, but to be honest, none of it is reinforced very much,” Srivastava said.

Carlmont open gym is relatively safer because strangers aren’t allowed to enter the facility, and athletes have less exposure to health threats. Mobasher notes the importance of maintaining an optimal environment for students to practice in.

“Badminton as a sport, in general, is already difficult to set up because it is only possible at a few private club gyms [that] charge money and at school, but COVID added another layer of difficulty,” Mobasher said. “Thus, we’re lucky to have any opportunity to set up such an environment for students to interact and just play badminton safely.”