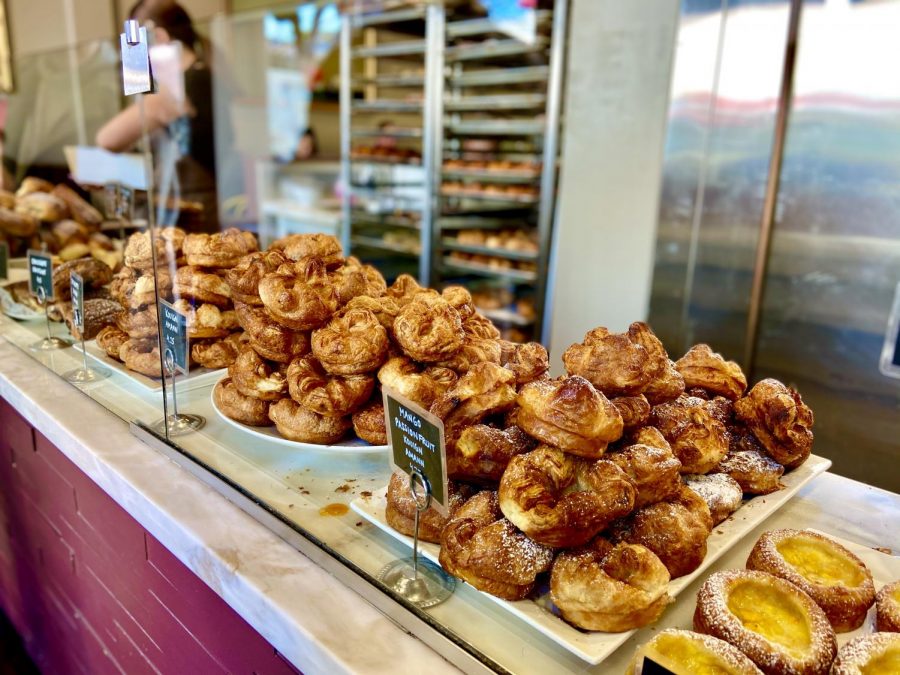 An abundance of kouign-amann are sold daily. However, B. Patisserie has decided to shut down their bakery temporarily.

The sweet smell of vanilla, apricot, and almond wafts through the crisp morning air in San Francisco, California. A woman beams as she walks out of Dianda’s Bakery with her daily order of an apricot twist. She smiles and thanks the owner, Floyd Goldberg, for staying open during the intensive circumstances.

“Scenarios like this prove to me that we need to stay open, and I think by staying open, we can all get through difficult times like this,” Goldberg said.

The rapidly spreading COVID-19 has affected numerous small businesses, particularly bakeries. However, many of these bakeries intend to stay open to create a support system within their community.

When a shelter-in-place order was first announced on March 16, many small business owners were confused regarding the regulations and how that would further affect their business, including Goldberg.

Goldberg said, “Confusion was the first thing I remember feeling, but I understood the seriousness of the situation. I think it is super important for people to take the precautions in order to prevent the spread of the virus.”

Mr. and Mrs. Dianda first opened the doors of Dianda’s Bakery in 1962. Located on Mission Street in San Francisco, California, Dianda’s focuses on serving their community with authentic Italian pastries.

Goldberg was determined to keep the bakery open, despite the COVID-19 crisis. According to the guidelines, following stricter hygiene regulations allowed for that to happen.

“We are sanitizing all the tables more often than usual, only allowing one or two customers to come into the bakery, and we have eliminated sit-downs and are only doing takeout,” Goldberg said.

Many other bakeries are also taking these precautions and following the same regulations, including B. Patisserie.

Known for their kouign-amann, B. Patisserie is well-known throughout the baking community and has been recognized with numerous awards, including the prestigious James Beard award.

After analyzing the current situation, owner Belinda Leong decided to close the bakery temporarily. Instead, she will sell all her products at her sandwich shop across the street.

“We closed B. Patisserie for the next few weeks. Our sister shop, B. on the Go across the street, is still open on Fridays, Saturdays, and Sundays, and we are selling pastries there,” Leong said.

“We are still open, more for the customers wanting bread and pastries, but then also it is tough for the people to be not working. So we wanted to give people opportunities who wanted to work so that they can,” Leong said.

“Closing like this is going to really hurt. It is really hard to close for such a long period since it is expensive not to be open and still be paying rent, all while also not laying off employees,” Leong said.

“There is a lot for us, as business owners, to consider. This includes everyone’s safety and the community as a whole, but also the economic consideration. If we close down, what does that mean for the business and for the employees who have families they need to take care of? So [there are] lots of hard decisions and things to consider,” Moser said.

Backhaus Bakery was created as a result of Moser finding a lack of interest in her past career as a translator. She and her husband decided to pursue their hobby of baking as a career, and ultimately started Backhaus. Backhaus translates to Bakehouse in German, which is typically an area where the community gathers and socializes. Moser wished to bring this same atmosphere to her community through bread and pastries.

“We really just want our customers to be happy, whether that is because bread is bringing them together at the table or people are sharing a loaf with others,” Moser said.

The current panic has caused grocery stores to lack many essentials, including bread. Due to this, Moser has decided to continue business and contribute to helping her community.

“We have heard from a lot of people that they can’t get bread at the supermarket because it is constantly sold out. So we feel like it is very helpful for the community if we keep baking for them,” Moser said.

To continue staying open during these occasions, Moser, like Goldberg and Leong, was required to make a few adjustments within how the bakery operated.

“Once the shelter-in-place order was issued, we decided we would mainly do pre-orders so we can serve people really quickly. We aren’t selling drinks or coffee at this time, only one person is allowed to be in the store at any one time, and we have a line system outside for people to keep their distance,” Moser said.

Moser hopes by continuing to stay open, she can support her community. With the current circumstances, Moser believes support and cooperation within the community are essential.

“I really feel like we can all get through this together and then continue as we were before, if not better and more understanding and supportive of each other,” Moser said.