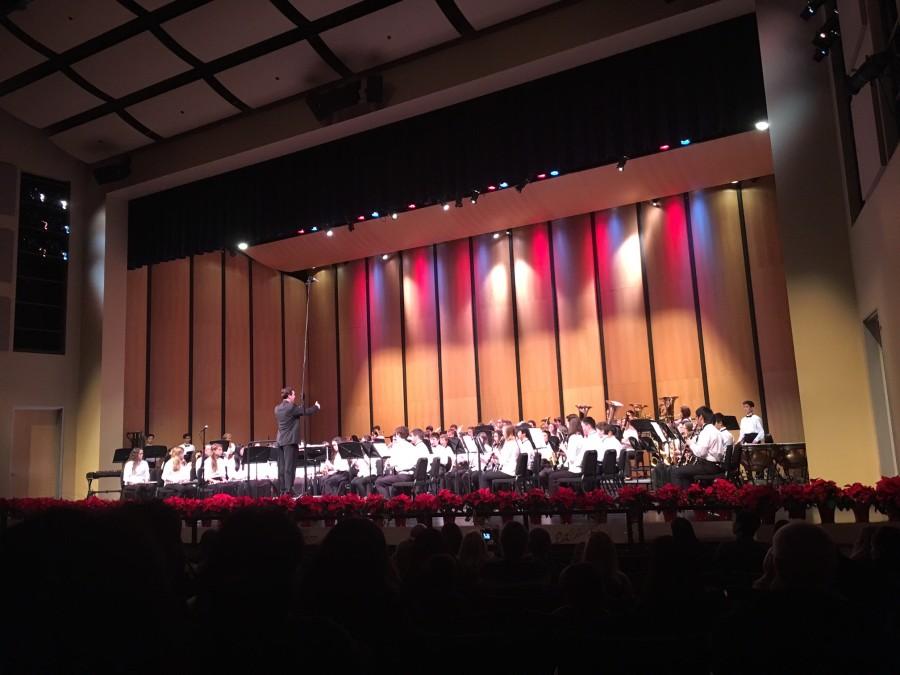 This first night of the concert included string orchestra and concert band.

The concert opened with words from Brad Jung, the president of Carlmont music booster. Jung said, “Thank you all for coming and supporting our kids and our students.”

Jung then asked that the crowd take a moment of silence in light of the San Bernardino shooting earlier that day.

Jung thanked all of the volunteers and reminded the audience of the bake sale to support Carlmont music programs during intermission.

As the concertmaster, sophomore Sam Fields gave the tuning note, which all of the string orchestra tuned to. Fields also had two solos during the first piece.

Instrumental Music Director John DaBaldo introduced the string orchestra’s third piece “Fantasy on Amazing Grace” as “one of the most loved American folk tunes, but with the melody shown through many different time periods.”

After intermission, the event started right back up with concert band, and James Searingen’s “Denbridge Way”.

After this piece, Assistant Music Director Lieven Smart took a moment to explain the personal importance the next piece, Frank Ticheli’s “Loch Lomond,” had to him.

“This song was sung to me as a child, and I sing it to my daughter now,” said Smart, who then continued to explain the origins and historical context of the song.

“I thought last night’s concert was outstanding. I loved the music selection and variety, and I got to see a lot of my students perform,” said audience member and math teacher at Carlmont Marianne Grandon.

Grandon intends to attend all three concerts in this series. She said, “I go to all the instrumental concerts. They’re my favorite.”

The next two nights are greatly anticipated by many, such as Grandon. The Dec. 3 performance will feature Symphonic Band and Symphonic Orchestra. This series will conclude on Dec. 4 with morning jazz band, jazz combos, and the Carlmont jazz ensemble.