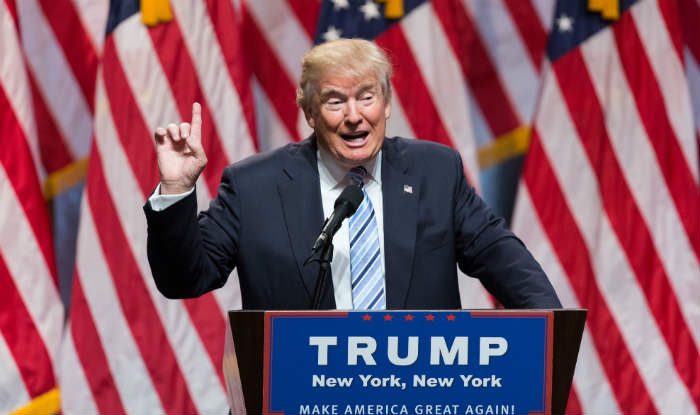 Donald Trump was elected the 45th president of the United States Nov. 8 as he gives a victory speech thanking his campaign staff and making promises for his upcoming presidency.

Donald Trump supporters are ignorant, but not as much as Hillary Clinton supporters.

As the presidential election drew nearer, the majority of Carlmont’s population and the Bay Area as a whole scoffed at Trump’s ability to dig himself deeper and deeper into a hole.

According to shapethefuture.org, 76 percent of registered voters in the San Mateo County voted for Democratic candidate Hillary Clinton while 19 percent voted for Republican candidate Donald Trump.

Firm in the belief that Clinton was better suited to lead the country, they rolled their eyes at Trump and moved on.

Throughout the Bay Area, many stuck Clinton bumper stickers on their cars and assumed that Clinton would prevail. However, people failed to consider just how persuasive Trump was to the rest of the country.

Someone could speed down the highways identical to the highways in the Bay Area with just one difference: the familiar Chipotle billboards exchanged for those with a giant scowling man with his finger wagging in the air and the bolded words “Make America Great Again. Vote for Trump.”

While many Bay Area liberals expected there to be a few Republicans tired of Democratic control to side with him, they expected his supporters to change once his painfully derogatory slurs were poured into the news.

In fact, after prominent Republican figures such as Mitt Romney dropped their support for Trump, it was assumed that it was only a matter of time before his endless insults would lose even more of his supporters.

But just how did we mislead ourselves in such a way?

For an area that’s predominantly liberal, many of Trump’s actions and words have been deemed horrific and disgustingly inappropriate. It was so much that these liberals simply couldn’t bear it anymore.

So they rolled their eyes and turned their attention to the candidate that they could tolerate.

By refusing to believe this man could possibly be taken seriously as the leader of our country, liberals failed to realize the weight of his faults against those of his opponent.

According to a poll conducted by CNN on Sept. 2016, 50 percent of registered voters considered Trump “more honest and trustworthy” versus the 35 percent who said the same about Clinton.

Bay Area liberals were so wrapped up in Trump’s bigotry and couldn’t stand what he had to say that they stopped listening. They focused on Clinton because she was more tolerable and they could endure listening to her without their ears bleeding.

By doing so, they shut themselves out of the race and isolated themselves.

People were shocked that such a man was elected the 45th president of the United States, but it was only a surprise because here in the Bay Area we didn’t consider the Republican candidate to be anything more than an unrefined radical.

However, as a nation we must stay aware of all views and opinions, no matter how much they oppose our own beliefs. We need to experience the eye-opener before it’s too late.