Behind the scenes of the musical 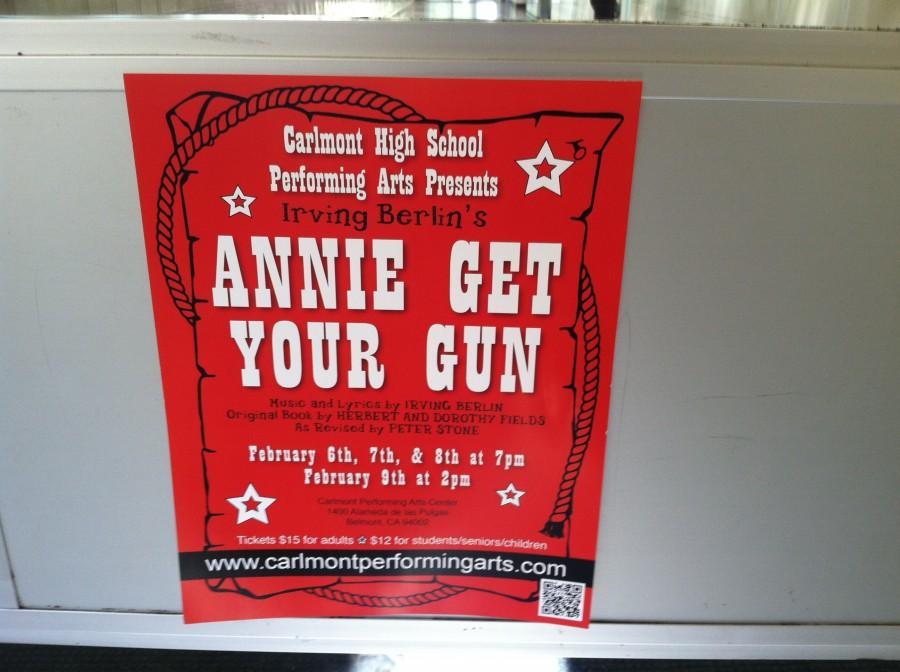 This year's musical is based off the Broadway hit, "Annie Get Your Gun."

This year, Carlmont’s musical is “Annie Get Your Gun,” and many students are eager to see their peers perform on stage.

“Annie Get Your Gun” is based off of a book by Dorothy Fields about the life of Annie Oakley and her relationship with a sharpshooter, Frank Butler.

Sophomore Abbey Holbrook said, “I really wanted to be a part of the musical this year because it is based on a popular Broadway musical, but it’s not a cliche musical, like Grease and Footloose.”

Last year’s musical, “Guys and Dolls”, proved to be hit. One night was sold out and only a few seats remained unsold by the end of the week. Carlmont’s interpretation received much praise by the local community.

“Last year, I did the musical, even though I was a freshman and didn’t have a performing role. It was a really good experience, and my family said they loved the energy and excitement that the student actors had. I’m definitely looking forward to seeing this year’s musical. I cannot wait to watch my friends act in front of a audience,” said sophomore Alex Singer.

Each year, however, many complaints arise regarding role assignments and late night practices.

Roles are assigned based on ability level and seniority. Often times, underclassmen participants serve as understudies for the leads. This has been argued as unfair year after year by disappointed students who were hoping for a more active role.

Because the musical is one of Carlmont’s most popular musical events, student actors and musicians rehearse on a regular basis most days during the week. As the opening night approaches, rehearsals become lengthy and tiring. Most practices last three hours or more.

Junior Emily Costello said, “I am an active member in the local acting community and the San Carlos Children’s Theater. I know how it feels when you don’t get the part that you tried out for, and I know how what it’s like to be rehearsing late at night and then come home to a giant stack of homework. But, as I play more parts, I understand that the directors do what they do for the good of the play.”