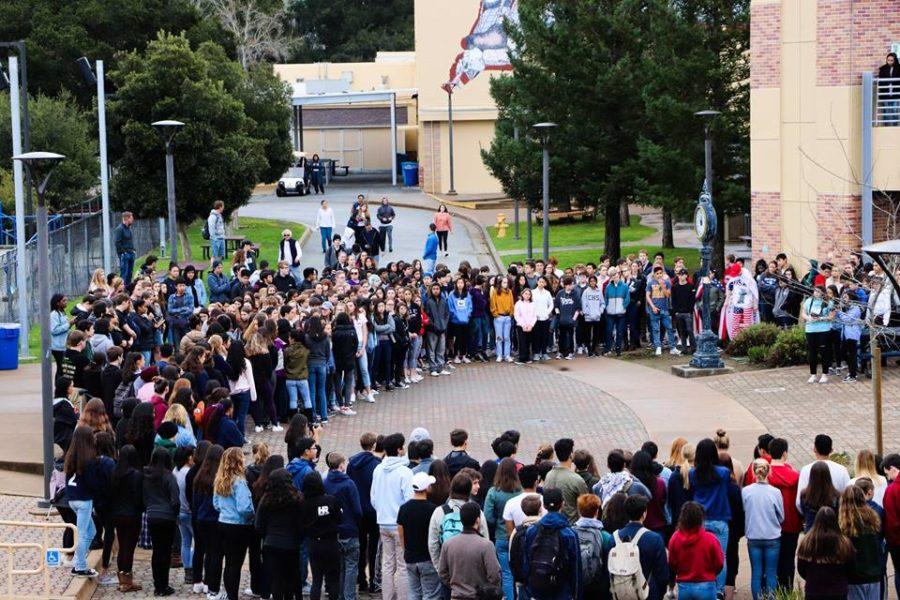 On March 14, 2018, Carlmont students walked out of class in solidarity with gun violence victims and survivors.

What do a smile, a wave, a “hello,” and an offer to be someone’s partner in a group project all have in common?

None of them have ever stopped a school shooting from occurring.

After the shooting at Marjory Stoneman Douglas High School, as students rose up and walked out of class on March 14, there were cries from parents, school administrators, and other insensitive adults that led to cries for students to “Walk up, not out.”

“Walk up, not out” is a trend of adults telling kids that approaching their classmates who often sit alone or who lack partners in group activities will change everything and will suddenly cure America of every gun violence issue it faces and deflects from the real issue at hand.

In fact, during the planning of Carlmont’s own walkout, the administration suggested replacing our 17-minute walk out with 17 acts of kindness.

Seventeen acts of kindness would be great, but that wouldn’t change the mind of a school shooter.

Should we be nice to people? Absolutely.

Will being nice to someone cure them of any and all psychological issues, or any other ill malice towards a group of people they may have? Most definitely not.

Saying that if the Parkland victims smiled, they would all still be here today, places blame where it should not be placed: on the students.

Isabelle Robinson, a former classmate of Nikolas Cruz, the Parkland shooter,  wrote in an opinion for The New York Times that her kindness towards Cruz did not stop him from killing 17 of her classmates.

Those of us who have experienced bullying know when our peers want to be friends with us, but we also know when our peers are talking to us out of forcefulness because they think there is something wrong with the kid who doesn’t fit in with everyone else.

Imagine being the outcast.  In the corner, alone, eating your sandwich. All of the sudden, you are being bombarded by your classmates with forced kindness and friendship, that none of them have ever offered before, and all of them terribly afraid that you will become the cause of the next tragedy, and afraid that your school will become the next Columbine, Parkland, or Sandy Hook.

The myth that all school shooters are outcasts who use school shootings as a response to being bullied couldn’t be farther from the truth. If this were true, the vast majority of shooters would be students of color, immigrants, or LGBTQ+ students, who are some of the most bullied groups of people in this country.

According to Mother Jones, since 1982, 64 percent of mass shootings have been committed by white people, mostly white men. Straight, white men will experience lower rates of bullying than anyone else, including white women.

Furthermore, in February 2018, The New York Times examined its own coverage of shootings and found one uniting factor amongst all of them: most of them men and most of them white.

Bullying is not a problem that should automatically be linked to a person’s likelihood to become a mass shooter. According to the Bureau of Justice Statistics on School Crime and Safety, among students, homicide perpetrators were more than twice as likely as homicide victims to have been bullied by peers. This doesn’t mean that all bullies will become school shooters, but it also does not mean that all school shooters have been bullied.

Bullying is a problem in schools, don’t get me wrong. But stopping bullying isn’t the same thing as stopping school shootings, or any other type of shooting.

Being a nicer person won’t change gun laws nor will it cure mental illness.

Walking up not out gives adults and administrators room to say “I told you so” the next time a tragedy strikes, and waives them of their real responsibility to solve these issues before they happen.

Sure, be nice to everyone.

But if we want to prevent gun violence, we must also walk out.