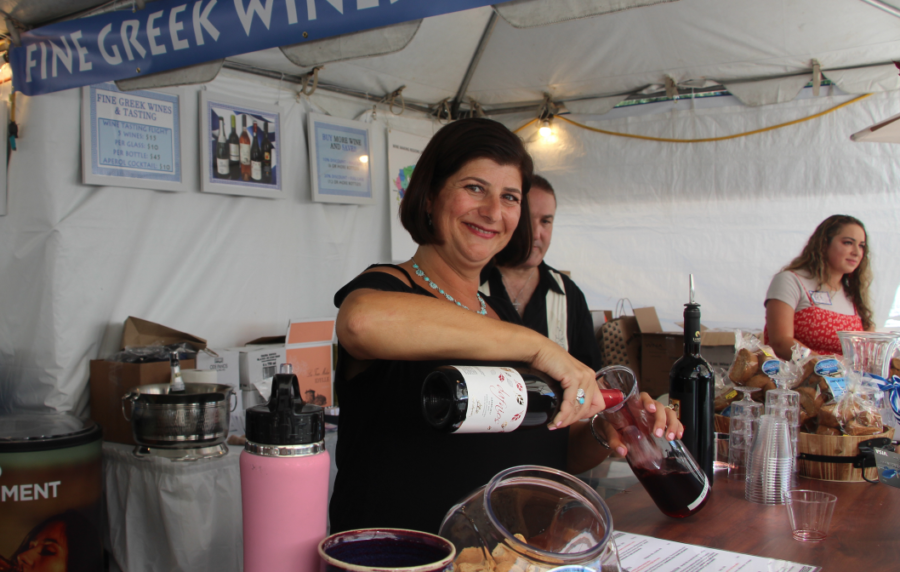 On opening day, one of the women working at the wine tasting booth pours a customer a bottle of wine.

From all over the world, families of Greek descent and other ethnic backgrounds attended the festival at the Greek Orthodox Church of the Holy Cross to experience the different aspects of Greek culture.

Evan Veloudis, the keyboardist and backup vocalist in the band Mythos, played at the Greek Festival for his fifth time this year. He flew from Athens, Greece to the west coast to perform.

Veloudis said, “We like to participate in anything that promotes our culture because we miss Greece and its dancing and music.”

In honor of their ancestors, children put on a demonstration of traditional Greek folk dances.

After the children performed, the dance floor opened up to the other attendees that wanted to partake in the tradition.

Eleni Richards, the daughter of the business owner of Beyond Bella, a vendor at the festival, said, “It’s a good environment to be in. There’s lots of Greek dancing, and I love doing that part the most.”

Sally Lico, an invitee, said, “My favorite part of the festival is the atmosphere, the vendors, and the food.”

Steve Stamatis, the co-owner of the company Grecian Soap Company, extended Greek hospitality to all customers.

“We just enjoy meeting people. We have a lot of longtime customers who come every year just to buy products from us. So it’s nice to get that kind of feedback,” Stamatis said.

One of the main attractions was the classic foods available. There was a variety of foods and beverages available such as lamb, gyros, and imported Greek sour cherry sodas.

Karlyn Griggs came from London and attended the festival for the first time with her daughter.

“We’re planning on having a nice meal together after we finish checking out the booths,” Griggs said.

Not only is the Greek Festival a way to share Greek culture with others, but it is also a path to pass down traditions to the younger generations.

Veloudis said, “It’s a little sentimental. You see the new generation learning something from a country that’s so far away. Everyone is included … It’s just people having fun. It kind of reminds me of Greece.”