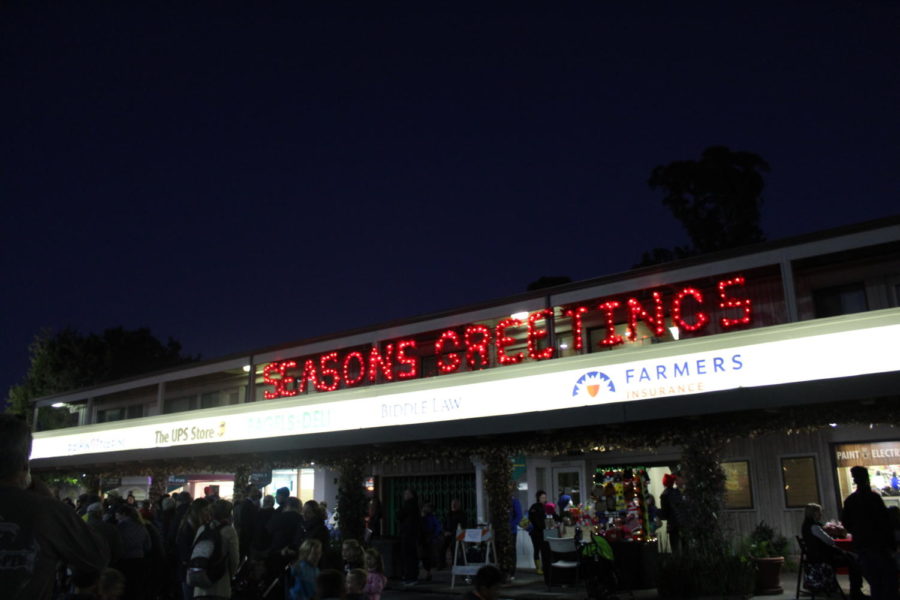 The Christmas Tree Lighting and Holiday Boutique attracted many people, and began the holiday season for the community.

On Monday, Nov. 27, the Carlmont Village Shopping Center hosted the Belmont Christmas Tree Lighting and Holiday Boutique. From 3:30 to 6:30 p.m., local artisans sold goods, Santa and his helpers visited with community members, and local vocal groups performed, including Notre Dame Elementary, Central Elementary School, Tri-School Chorus, Artis School of Music, and Out of the Blue, one of the a cappella groups from Carlmont.

“It’s a wonderful tradition for the community, as well as the schools and the families that participate,” said Mike Picone, the MC for the evening and manager of the shopping center.

The event is organized each year by the Carlmont Village Shopping Center and produces a large crowd each year. Additionally, the event marks a transition into the holiday season for many and allows the community to come together with various festive activities for all ages.

“This is my second time coming, and I came back after last year because there are a lot of kids here, which is my audience, and they all get excited about my hats,” said Vicki Beatty, who sold crocheted hats in the Holiday Boutique.

The holiday boutique-lined the walkways of the shopping center and was filled with local artists selling jewelry and other goods—many of which were related to the holiday season.

“There is a great turnout this year. Last year a few of the groups that were going to perform dropped out because of lack of funding for their programs, but many of them came back this year,” said Picone.

The various vocal groups that performed put the crowd in good spirits as people sang along to some of their favorite holiday tunes.

“It’s pretty exciting. I’m excited to see the Christmas tree be all lit up and also to perform. I had never performed at this event before, so I had no idea what to expect,” said Amelia Espinosa, a junior, who sang with Out of the Blue.

As children lined up to get photographs with Santa Claus and parents held small children on their shoulders to see, the excitement in the air sparkled as bright as the holiday lights that decorated the parking lot.

After a resounding “Three, two, one,” the large tree in the in the shopping center was lit up, colorful lights shining brightly.

“It’s almost Christmas time, it’s all festive and holidays. There’s hot chocolate, and Santa and kids singing. The organizers do a great job putting this together because it brings the whole community together,” said Beatty.