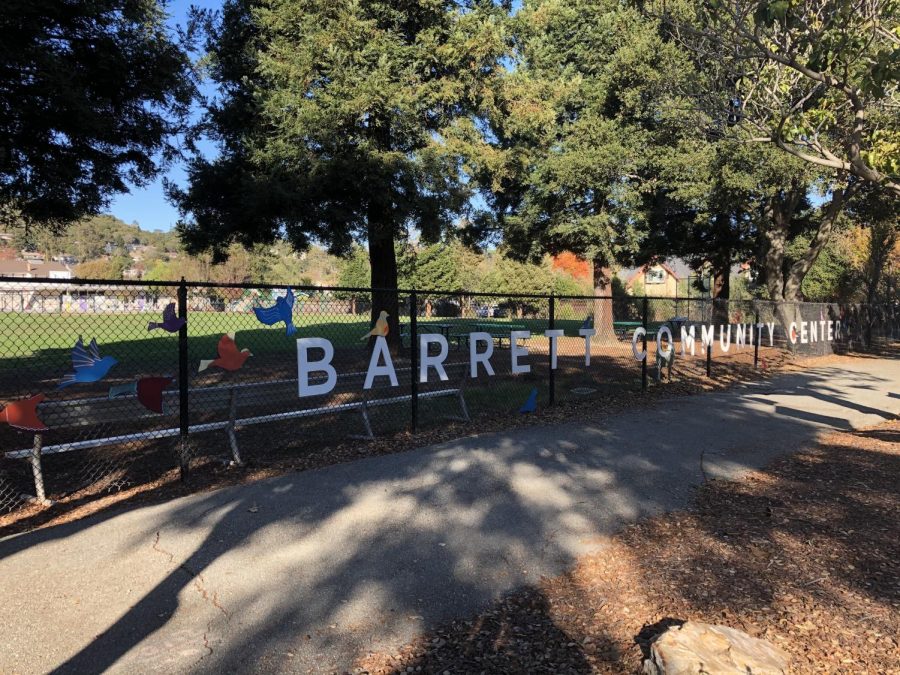 The Barrett Community Center sign features artwork showing many birds flying around the words as a decorative addition to the fence.

Many renowned cities have unique advantages such as location, ancient architecture that attract tourists, increased revenue, beautification, and a sense of originality.

Belmont, being similar to many other suburban cities, lacks many of these assets, which is why the Belmont City Council has approved an implementation plan for installing public art this fall.

Belmont has many plans set for the future of the city, including the Twin Pines Park Master Plan, which looks to revitalize Belmont’s main public park.

Belmont’s Public Art Master Plan contains three projects that the city will implement to increase the beauty of the city and the quality of life for its community. These plans include the Signage and Wayfinding, Streetscape Design, and Public Art plans.

“[The plans] will improve how the city looks and functions for visitors and citizens alike,” Carlos de Melo, community development director, said.

The Signage and Wayfinding Plan aspires to improve navigation through Belmont, help guide people to landmarks, and mark neighborhoods. This will be done with the implementation of new additions to the streets of Belmont with the Streetscape Design Plan.

According to the Streetscape Design Plan, new trees and other greenery to line the streets, signs dictating important locations of the city, and banners on light posts will all be added in the future. The Belmont City Council aims to boost the city’s functionality and aesthetic to everyone, but many believe that what will truly improve the city is the addition of public art.

“Belmont has already seen some minor implementation of public art,” de Melo said. “The Public Art Master Plan is a long-term project for the city.”

The Public Art Master Plan is the city council’s plan in collaboration with Art Builds Community, formerly known as Barbara Goldstein & Associates, to implement public art that will be displayed around the city.

The city already hosts a number of events, such as the Save the Music Festival to support the arts. The plan also strives to celebrate the history, nature, and diversity of Belmont through new artistic contributions and show the value of the community and its citizens.

Belmont has already seen the utility boxes all around the city become decorated with creative and colorful designs, including pictures of dogs and a sign of Belmont’s best locations. These small contributions alone have lightened the streets of Belmont with a new sense of pride and creativity.

These small art pieces are only the beginning, as the Public Art Master Plan is intended to be long term.

“It will be another four to five years before we start to see widespread major works of public art installed in Belmont,” de Melo said. “In the meantime, more small additions such as the utility boxes will continue to appear.”

Unlike larger cities with sufficient funds for public art projects, Belmont did not have funds set aside for the project, so the creators of the project needed to come up with possible funding methods.

The city decided to use methods like partnering with local businesses, setting aside a fund for art, and requiring all developers to set aside 0.5% to 2% of permit values and construction prices for public art projects.

As the city continues to expand, the funds and the amount of art in public spaces will naturally increase.

Many people of all ages find interest in support of the plan. Ian Yao, a sophomore at Carlmont High School and an artist and photographer, finds himself excited for the project.

“I think public art can make a community feel more vibrant.  It can add a sense of character to things that are otherwise totally mundane,” Yao said.

Currently, the plan is halted due to the priority of COVID-19 in San Mateo County, but in the future, Belmont will see a drastic growth in art and originality from the Public Art Master Plan.