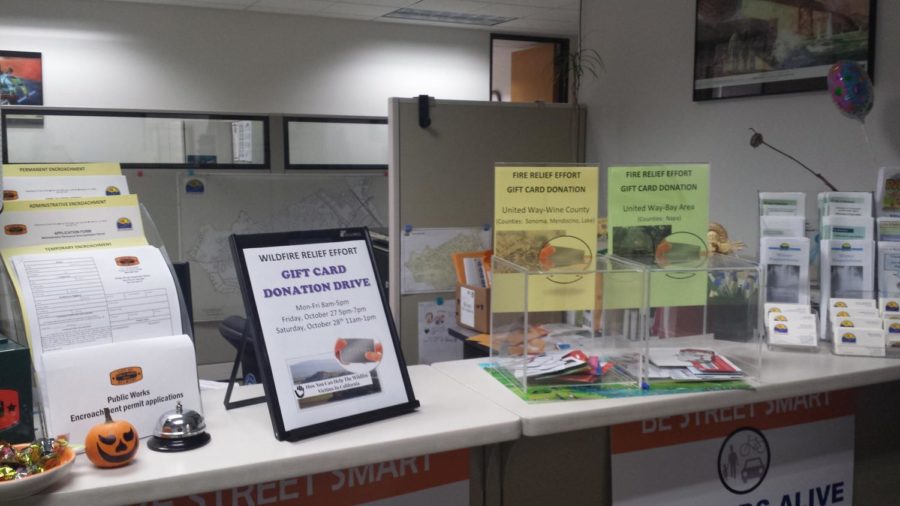 The gift card drive will give gift cards to United Way Bay Area and United Way of the Wine Country. Both are branches of United Way that will provide aid to fire victims.

To help those who lost their homes and property in the North Bay fires, Belmont is hosting its own gift card drive.

People who would like to donate to the fire victims can give gift cards to the Public Works Department in suite 385 of Belmont City Hall. Managed by the city, the Belmont Police Officers Association, and the Belmont Firefighters Association, the drive will distribute through United Way, who will make sure that the gift cards are sent to the places where they are most needed.

“[The gift cards] are things that can be handed out to help the people in the fire,” said Diane Lynn, an administrative assistant for the Public Works Department. “They can be used right away based on what each [fire victim] needs for their situation.”

Donors to the gift card drive can choose to send their contributions to either United Way Bay Area or United Way of Wine Country. In this manner, people can certify that their donations are given to a preferred area.

On the other hand, if the gift card donors do not specify as to which branch they would like to donate to, United Way will distribute the cards as needed to the fire victims.

“I think that we definitely need to help the fire victims,” said Chris Alvarez, a junior. “However, in my opinion, I think food and clothes are better donations than [gift cards] because it saves them some effort. [This] would hopefully allow for them to recover faster.”

In total, the fires in the North Bay have caused tremendous damages. According to the Los Angeles Times, the local authorities estimated at the end of October that 14,000 homes had been destroyed. On the other hand, California insurance commissioner Dave Jones said that $3 billion dollars in damages were incurred from the fires.

Sam Fields, a senior, believes that the best way to help the fire victims would be to give monetary donations in place of gift cards or physical objects.

“I think that it would be much more helpful [to give] regular monetary donations because then people can spend it on what they need most,” said Fields. “I hope that it works out for them in the end though, and we should definitely give donations to help rebuild their community.”