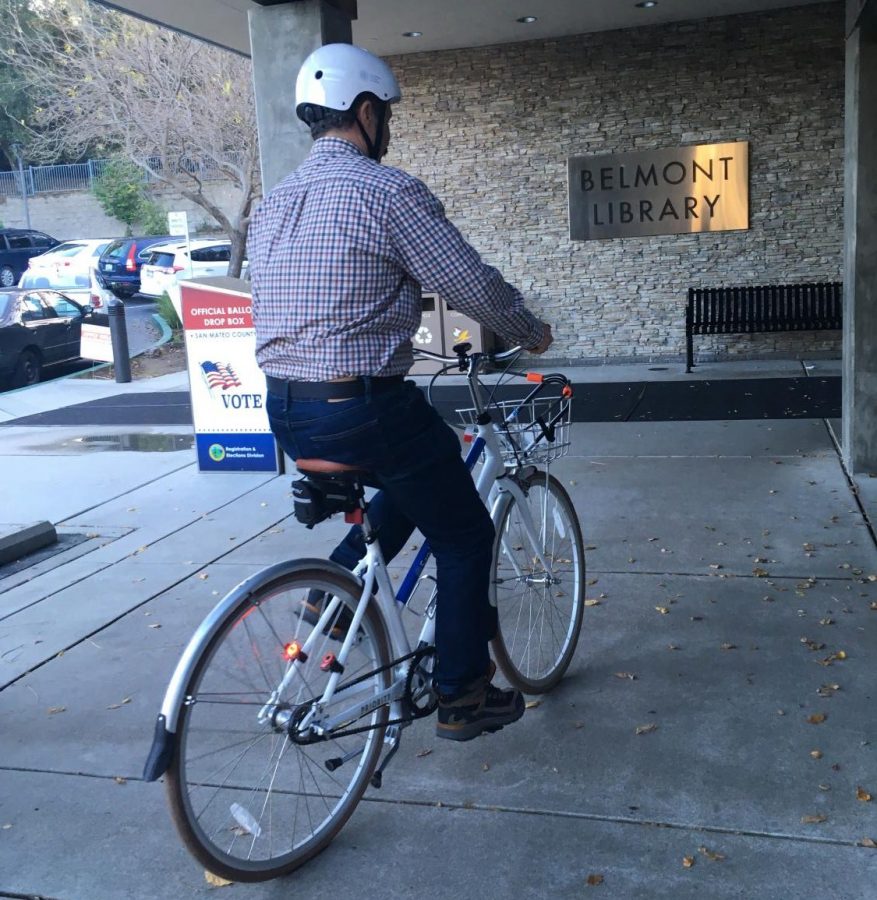 A library member rides down to the Belmont library to return his bike before closing.

With every new year comes a new resolution.

Whether it be through a new diet, fitness plan, or even a vow to try something completely out of the ordinary, the implication of another 365 days often prompts individuals to want to improve themselves in one way or another.

The same can be said for the Belmont Library.

With four gleaming bikes and a free all-day checkout, this system is looking to be a promising investment.

“Right now is only the pilot period,” head librarian Kathleen Beasley said. “So far, the response has been largely positive, with groups taking each bike out at least once a week.”

The initial plan was pitched by David Vargas, the tech specialist for the Belmont library. Once the staff chose to pursue the project, they had to carefully plan out the logistics, all the way down to the visual appeal.

“There were all kinds of issues that needed to be worked out with the library administration. A waiver needed to be signed, and a helmet and medical kit checked out. Our logo was especially important, and our advertising department needed to decide on the final look,” Beasley said.

With all of the kinks worked out, the only thing left to do was to set an age requirement. The staff chose to place the bar at 18 and older, mostly out of a concern for the safety of youth.

“Not every road in this area is super bike-friendly, and the choice is more of an abundance of caution than anything else,” said Chris Lu, a staff member at the Belmont Library.

Even so, the library administration is open to relaxing the age restriction if need be.

“Since we are only in the pilot stage of the program, the age rule is not hard and fast. So, just because it’s no, for now, doesn’t mean it’s no forever,” Lu said.

Because the lending system is so new, many of those living in Belmont haven’t had the chance to take the bikes out for a spin. However, those who have suggest that the program greatly benefits the community.

“The system is great environmentally since it is always good to choose biking over cars for transportation. Becoming a greener community is definitely something that everyone should work towards,” said Alison ten Cate, a Belmont resident.

However, ten Cate also believes that more caution is necessary due to the installation of the bikes.

“In terms of safety, I think raising awareness is necessary both for bicyclists and cars. It should be more widespread information that bikers are coming from the library and driving around town, especially in the downtown area,” ten Cate said.

Whether to take a family bike ride around the Belmont hills or run a few errands, advocates of the new bike lending system are confident in its ability to aid the overall functionality of the community.

“This program goes to the concept of pushing beyond what a traditional library is for its community, giving our users more freedom to check out not only books but also transportation,” Lu said.