Belmont wildlife has a ‘deer’ friend 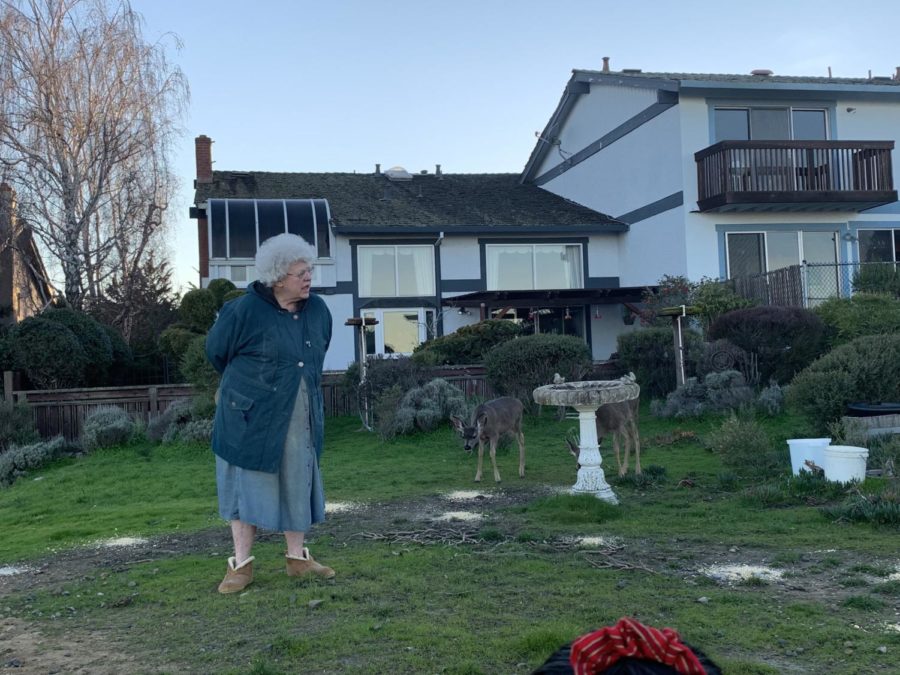 Sandy Hutchinson stands before some of the many local deer living in Belmont.

Every day throughout the year, a local resident works wholeheartedly to look after the deer living in Belmont.

Sandy Hutchinson, who has resided in Belmont since 1978, has taken care of the many deer living near her house.

“Like in Africa, if one of their own kind gets wounded, they kick them out and wait until they die, which is one of the reasons why I started feeding them,” Hutchinson said. “It also keeps them from eating the plants in my yard.

Black-tail deer are the most common breed of deer in Northern California. Locally, their habitat is far bigger than what one may realize at first glance. Hutchinson ’s neighborhood happens to be located in the hills directly behind Carlmont High School where many deer live.

Hutchinson said, “They have a huge habitat. They come from all the canyons on opposite sides of the street.”

These canyons include Water Dog Park Reserve, which is home to the majority of the wildlife in Belmont and where hundreds of bikers, joggers, and hikers pass through weekly.

“Sometimes a bobcat or coyote will come up from the canyons to hunt them down,” Hutchinson said.

Herds of deer pass through local industrialized neighborhoods every day, and one herd in specific returns repeatedly to Hutchinson’s feeding spot.

“I’ve even seen them with broken legs. When this happens, I give them extra food since The American Society for the Prevention of Cruelty to Animals does not do much to help deer,” Hutchinson said.

Not only does Hutchinson feed the deer, but she also provides and regularly replaces a creative fresh water source for them.

“A while back, I set up a post with a cement bottom and a wooden top which holds a plant saucer,” Hutchinson said. “[Then] I have a pipe running along the post to turn it on and off.”

Hutchison acquired her agricultural knowledge from the rural town where she lived prior to moving to the Bay Area.

“I owned a house up in the country, and the lady who lived there before had done this, and I saw it and got inspired to learn how to build it myself,” Hutchinson said.

Hutchinson has always had a passion for animals and gets her knowledge for them through the education she received years back.

“I am an old biologist. I have a degree in biology. I have absolutely adored animals for as long as I can remember,” Hutchinson said.

Even though Hutchinson has looked after these animals for such a long period of time, she does not disregard the fact they are still wild animals.

“I never give them human food since that’s not what they’re used to in the wild, and I keep myself from petting them since they need to remain scared of humans,” Hutchinson said.

As Hutchinson is feeding the deer, they remain extremely cautious regardless of the fact that this has become their daily routine.

“Even though I’ve been feeding them for years, they still get skittish because that is their natural fear,” Hutchison said. “They’re very cautious, which is why they circle around when they eat.”

When the deer heard a local pet dog approaching from a distance, they immediately leaped down into the canyons.

“Deer are sensitive to noise because their sense of hearing is far better than ours. Plus, they are being wary of predators,” Hutchinson said.

Hutchinson plans to keep taking care of these deer for as long as she can since it is something she is passionate about.

Hutchinson said, “I’ve watched some of them live their whole lives. I’ve seen babies grow up into mommies themselves.”