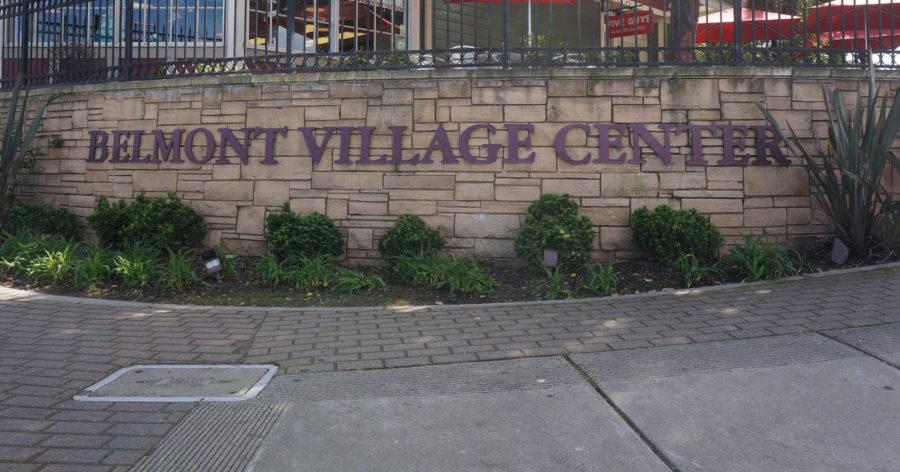 Currently, Belmont's downtown is a loose union of chain stores and fast food restaurants loosely based on the Downtown Specific Plan of 1990.

Belmont’s unbuilt town center has been in development for 31 years.

In 1986, a committee was formed to study and evaluate the feasibility of revitalizing downtown Belmont. After a four-year period of intense examination and review, the city council ratified the Downtown Specific Plan, a 162-page document articulating everything from broad layout to minute architectural details.

“An all too common problem with many community plans is that the hopes and the visions expressed in them bear little or no relationship to what can be realistically or practically accomplished,” the document reads. “The basic principle which guides each component of this Specific Plan is to concentrate the City’s available resources on implementable objectives.”

During the 1990s, after the approval of the plan, a small part of the city’s vision was realized in the form of the loose union of stores on the corner of El Camino and Ralston.

However, the Belmont Village Center constructed 20 years ago is a far cry from the grandiose illustrations in the Downtown Specific Plan.

“Rules need to be more flexible, property owners need to cooperate, and you need a hot economy,” de Melo said. “The rules in play at the time were not streamlined, and didn’t allow some greater levels of intensity in terms of height, density, and floor area.”

With a community uncomfortable with development, a hesitant city council, and equally prohibitive zoning restrictions, the plans never came to fruition.

“We knew that we were having some difficulty working with some of the property owners that may not buy into a vision,” said Carlmont history teacher David Braunstein, who served as Belmont mayor in 2009 and again in 2015. “We had a vision that we wanted a vibrant downtown, but we didn’t know what that meant, nor did we have sufficient professional assistance to get there.”

The specificity of the Downtown Specific Plan also presented a problem. The intricate architectural requirements and contradictory zoning regulations discouraged investment, and between 2003 and 2012, the city’s proposals saw little attention from developers.

“We were saddled with the development standards that were really strict. The developer would look at them and say, ‘This just doesn’t pencil out for me,'” said de Melo.

With time, however, the conditions changed. The 2014 resignation of former Council Member and Mayor Christine Wozniak was the finishing blow to a previously fortified coalition of council members who many blamed for Belmont’s zoning gridlock.

Charles Stone, Belmont’s sitting mayor, was elected in 2013 on a platform emphasizing business and development along transit corridors. Along with Vice Mayor Doug Kim and fellow Council Members Davina Hurt, Eric Reed, and Warren Lieberman, many believe Belmont is entering a new era of development and commercial growth.

“This current council, I think, has certainly demonstrated that they’re a little more progressive when it comes to these kinds of issues,” said de Melo. “I think they’re definitely supportive of taller buildings and greater intensity.”

By relaxing stringent commercial zoning restrictions, the city has been able to enter negotiations with development group Sares Regis for several upcoming projects along El Camino and Old County Road, some of which have already entered the preliminary stages of development.

“We have had a lot more interest from developers over the past three years now that they know they might have a chance of getting an approval,” said Stone. “I’m convinced this wouldn’t have happened if the prevailing attitude on the council was still one of BANANA (Build Absolutely Nothing Anywhere Near Anything).”

Some of the city’s restrictive zoning ordinances and building codes stem from the apprehensions of previous councils towards development. Belmont’s new city council has already made headway in amending the city’s zoning laws.

“Beyond the nuts and bolts of creating the conditions that attract developers through ‘right-sizing’  development rules/zoning laws, we also have already signaled an about-face in policy from the council of the first decade of the new millennium that was decidedly anti-growth/anti-development,” said Stone. “I can’t emphasize enough how important that has been.”

Drag the slider to compare existing locations with their proposed redevelopments. Rendering credit: City of Belmont

Among the new developments is Firehouse Square, located on Fifth Avenue. The plan intends to replace a series of aging and vacant properties with an 80-unit, 4,000 square foot retail-residential complex.

According to de Melo, Firehouse Square is a good model for the kind of development the Belmont Village Specific Plan intends to encourage.

“It’s going to be a real game-changer for the neighborhood,” said de Melo.

Belmont’s lack of a town center is somewhat unique, especially in the Bay Area. Towns and cities like Palo Alto, San Carlos, and Burlingame all have popular, established community and economic hubs. Al Savay, community development director for San Carlos, tells of the immense value of their downtown, a 12-block strip of parks, storefronts, and restaurants on Laurel Street.

“Downtown has historically been the city’s living room, where everybody comes to shop, meet their neighbors, and dine out. It really is a meeting place — a central location of the community,” said Savay.

However while San Carlos’ geography and urban layout naturally cultivate a town center, Belmont’s topographically varied neighborhoods, arcane zoning restrictions, and lack of through roads make any sort of downtown development an undertaking.

“Laurel Street is perfect because it’s ripe for redevelopment: it’s a two-lane street, and the development rules in San Carlos are probably more flexible and friendly and allow for greater scale,” said de Melo.

Another difference between San Carlos and Belmont is the fact that residential neighborhoods border Belmont Village on all sides. Sophomore Denton Silfvast lives on Sunnyslope Avenue, located directly behind Firehouse Square. Like many residents of Belmont, Silfvast has concerns about the scope and impact of the project.

“My main concern is with how much busier the areas around my house are going to become. With a lot of condos comes a lot of people, and a lot of the streets around here are narrow and in bad shape,” said Silfvast.

“They’re going to definitely experience some change as well. You start to introduce more activity here, there’s going to be more movement,” said de Melo. “More people, more cars, more pedestrians, more potential noise, and you’ve got to be sensitive to that.”

Drag the slider to compare existing locations with their proposed redevelopments. Rendering credit: City of Belmont

Despite the potential consequences the project could have on his neighborhood, Silfvast recognizes the benefits of downtown redevelopment.

“Overall, I think it’s a great idea.  It would be great to have a central place in our community that isn’t just a small shopping center or a string of shops and restaurants along a loud and busy street,” said Silfvast.

Braunstein, who has lived in Belmont for 20 years, recognizes the obstacles Belmont’s geography and layout pose in creating a downtown, yet he remains optimistic.

“I’m not sure Belmont will ever have the town center we all would like because of the geography. We don’t have the land,” said Braunstein. “But can we try? Am I excited? Yeah, if they do it right.”

While past councils have been largely averse to high degrees of commercial development, the current incumbents say they are eager to collaborate and produce a downtown Belmont worthy of its residents.

“Each council member has certain priorities and concerns about the downtown area that come to mind — housing, affordable housing, art, gathering places, parking requirements, etc. — but everyone is united in working toward doing everything we can to create the conditions necessary for a vibrant downtown,” said Stone.