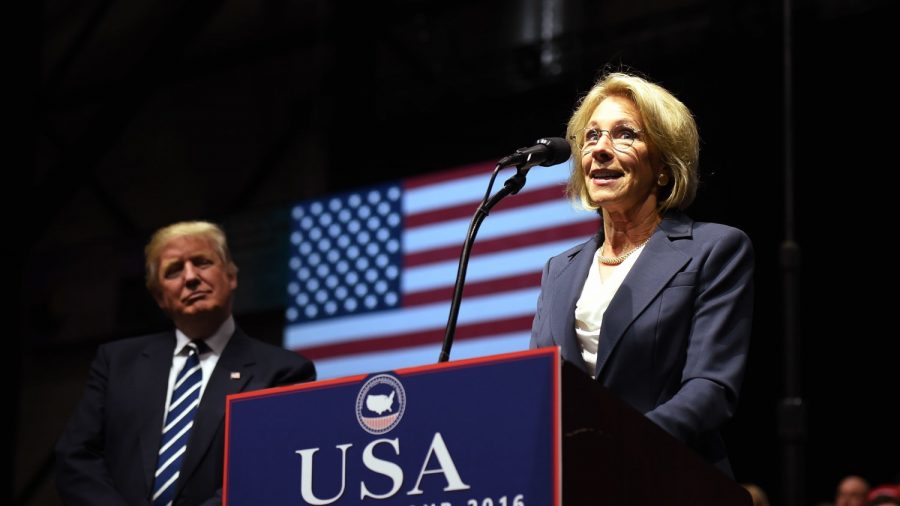 Betsy DeVos is the ideal cabinet member for a president determined to appoint officials that aim to eradicate the agencies they run and determine the fate of policies and programs based on individual ideology.

DeVos has lived a life completely sheltered from contact with public schools, and her confirmation hearings revealed both her ignorance of education policy and contempt for the public education system.

During her confirmation hearing Jan. 17, DeVos suggested that states should decide whether schools must follow the federal Individuals with Disabilities Education Act (IDEA), which guarantees a “free appropriate public education” to disabled students, later saying she may have been confused about the IDEA’s requirements.

According to the Huffington Post, DeVos has donated millions of dollars to replace traditional public schools with charter schools, meanwhile converting taxpayer dollars — which would otherwise be used to fund public schools — into vouchers to help parents send children to private and religious schools.

Many education advocates have criticized this strategy because it uses already scarce public school funds to benefit mostly wealthy families, thus leaving the most vulnerable students at risk.

This being said, the Bay Area does not have a shortage in money nor does it have any failing public schools, so the schools within the Bay Area will not be as vulnerable as other districts to DeVos’ voucher plan.

The Every Student Succeeds Act passed under the Obama administration also significantly restricted the education secretary’s authority and shifted much of it away from the federal government and into the state and local governments.

This further protects the Sequoia Union High School District from any of DeVos’ controversial implementations.

However, there are certain things that the education secretary can do immediately that can affect public school students across the country — specifically in the domain of civil rights.

There is a whole realm of civil rights enforcement and investigation that is now under DeVos’ management. This means that with a simple stroke of a pen, DeVos and the Trump administration could revise or revoke many of the progressive statements created by the Obama administration, such as the established guidance on transgender students’ accommodations in public schools. Similarly, they can reverse the guidance set by the Obama administration that pushed schools and colleges to handle complaints of sexual violence.

While her nomination shed light on an authentic debate about charter schools as an alternative to traditional public schools, her uncompromising opposition to any real accountability for these schools undermined their founding principle. This lack of accountability caused some of her support to drop as well. According to The Washington Post, several advocates of charters, such as the Massachusetts Charter Public School Association, opposed her nomination.

Although her ignorance and unjustified disdain for the public school system is troubling, this frustration must be used to fuel advocacy. Educational advocates and students alike must work to keep DeVos accountable.